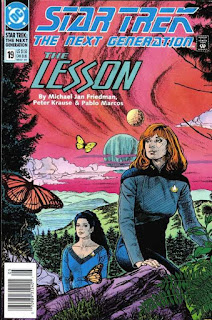 “The Lesson” is a story that could never have been made on the TV series. This is highly unusual to say, because, with the exception of a particularly lavish holodeck environment, the entire story takes place on the Enterprise and there's not a single “effects shot” apart from the exterior view of the ship in the first panel. Normally, one would expect the comic book to tell stories that were too complex or expensive to film, but this is an extraordinarily intimate and low-stakes story the existence of which reveals some odd truths about how curiously inverted the roles of the two main series have become by now.

“The Lesson” is also perfect Star Trek: The Next Generation, standing shoulder to shoulder with “The Wounded” as something utterly and incomparably definitive.

It's not so much a story as it is an interlocking series of vignettes all centred around the concept of learning and growth. Beverly confesses to Deanna that it's her birthday today and she's depressed not because anybody forgot, but because she thinks shes getting older and feels past her prime. Commander Riker is giving a guest lecture to the Enterprise school about the American Revolution and how it could have been prevented (a subject he did his master's thesis on) and caution's Wesley (who's still aboard at this point in time and attending the school) that he won't let personal feelings get in the way in an academic environment. Worf reads a letter from Jeremy Aster, who confides in him his uncertainty about pursuing his crush because there's another boy who he thinks he doesn't stand a chance against. Geordi and Miles O'Brien are sitting in ten forward talking about unique celebrities from around the galaxy who live outrageous lives they'd like to emulate, and they rope Data in to get a third perspective.

As a present to Beverly, Deanna prescribes her a “special” unorthodox treatment on the holodeck where they traverse a rugged and breathtakingly beautiful amalgam alien landscape as they hike through dense forests, cross waterfalls and scale mountains. Though she complains all the way, at the top Beverly is taken aback by the view and remembers that age is just a state of mind. Wesley catches Will in a factual slip-up and corrects him in front of the class, which embarrasses him, but Will thanks him afterwards saying that if he wasn't going to give Wes any special treatment, he shouldn't have expected any in return and confesses he should have prepared better. Meanwhile, as he observes Geordi and Miles' conversation and, after he's prompted for his opinion on which celebrity he'd most like to be, Data says he wouldn't like to be anyone other than who he is and wouldn't want to live anywhere apart from the Enterprise.

It is deeply, deeply ironic that this story exists here in May 1991, directly contemporaneous with garbage like “The Host” and “In Theory”. For all the writing staff may whine about wanting to do smaller, more intimate stories that just focus on the drama and the characters without having to worry about the allegedly extraneous and superficial science fiction elements, the show itself is *extremely* reticent about doing an episode that doesn't have an action story as at least a B-plot. Hell, even “Data's Day” had to go out with a third-rate, phoned in Romulan espionage thriller side-story because Rick Berman and Michael Piller thought Star Trek: The Next Generation's audience would go blind with rage if they were exposed to an episode that didn't have shooty phasers, realpolitiking or stuntmen punching each other. That's not touching on the fact that when the production team *does* allow itself to do stories just about people and their relationship, they tend to royally screw it up by writing everyone as offensively rote, stock, robotic and stereotypical character archetypes.

With “The Lesson” though, we get a story that literally is nothing but people talking to each other from start to finish, it's an absolute masterpiece and it's from the *comic book adaptation*. Y'know, the medium that's supposed to be juvenile and aimed at a much younger demographic that we would expect to require a lot more lurid and grotesque action. That's not to say though that there's no spectacle whatsoever in “The Lesson”: As a matter of fact, I hold this story up as a masterclass in how to do nuanced character-focused exploration in genre fiction. We've established that action sci-fi does by definition necessitate some kind of action, but we've also established that Star Trek: The Next Generation is not action sci-fi, a truth that, if nothing else, “The Lesson” proves beyond a shadow of a doubt. But it still is science fiction more generally, not to mention the fact it's still visual media so we do need something to look at.

What “The Lesson” does is shift where the sci-fi spectacle should go. Instead of being the main conceit of the plot, the sci-fi imagery is implicit within the setting (the Enterprise, a starship in a utopian future inhabited by the sorts of people who would act the way the characters in “The Lesson” do) and, more overtly, in Deanna's holodeck simulation. It's as wonderfully, beguilingly fantastical an environment as Star Trek has ever given us, with all kinds of beautifully xeno scenery and exotic flora and fauna, most of which only show up briefly and that Deanna only ever addresses casually in passing. Already this is a breath of fresh air and a gentle reminder of the sorts of things the comic can do that the TV show can't (a great deal of the show's location sets, even holodeck ones, tend to suspiciously resemble either Planet Hell, Malibu or the C. Tillman Water Reclamation Plant), but actually I'm also reminded as I read this story now of the forest of Nolandia on Ookbar from Dirty Pair: Affair of Nolandia.

Anything that reminds me of Dirty Pair, especially that movie, is a very good thing just on principle, but like in Dirty Pair, the forest in “The Lesson” serves as an imaginative and powerfully evocative backdrop for the characters, story and themes, which actually manages to enhance and highlight those concepts. This is what a really good sci-fi-fantasy setting can do: It's not the core idea of the whole work, or at least it doesn't have to be, but it's a world that operates by the logic and aesthetics the story is trying to look at and is thus an extension and manifestation of it (just to gush about Affair of Nolandia a bit more as I don't get to do it enough, that movie is really, really good at this because that's how Nolandia functions *diegetically*). So no, genre fiction concepts and good dramatic storytelling need not be diametrically opposed; a talented writer can use one to greatly enhance the other, demonstrating how they're in essence the same thing. This is, of course, a very Long 1980s way of thinking: The idea that you could tell a story through images and the emotions they evoke alone.

Apart from Pablo Marcos' art hitting new heights, I'm additionally really happy to see Michael Jan Friedman's characterization of the Enterprise crew continue to develop and mature. His Deanna Troi remains utterly singular and unique, which really shines through and helps “The Lesson” considering she plays such an important role. Friedman's Deanna exudes an elegant, yet mischievous, sense of knowing confidence that's also oddly dissonant and alien at times, though not at all in a way that makes her off-putting. If I were to quibble I'd say it doesn't really match Marina Sirtis' portrayal, but, than again, Marina Sirtis is constantly rubbing up against Deanna Troi anyway, isn't she? And regardless, it seems unfair considering what top sorts everyone is in this month, especially Will and Beverly. The only other place I could think the criticise might be the Geordi, Data and Miles C-plot which I always seem to forget about for some reason. But in hindsight, it fits way better than I used to think it did: Obviously Data would want to reinforce how at home he feels on the Enterprise, because the Enterprise is a place where “The Lesson” can happen and he can sense that.

“The Lesson” is masterclass work and essential reading: An utterly flawless execution of Star Trek: The Next Generation's children's television for adults, except in a comic book. In every way, it should serve as a wake-up-call and, er, lesson, for the TV show to heed more often. This is pretty much where the comic book line just officially drops the mic: We already knew it was capable of standing toe-to-toe with its older sibling and that there are things only it can do, but now it's completely blown by it. With very good reason was this chosen as the third story to be reprinted in The Best of Star Trek: The Next Generation, a trade paperback omnibus of choice stories from DC's comic line with input from no less than Jeri Taylor. In a time when Star Trek: The Next Generation is freshly reinventing itself across the board, this is the exact kind of thing we need to be seeing a lot more of going forward to fully get is the redemption we deserve.

As if sensing this looming and exciting zeitgeist, “The Lesson” soon reveals itself as merely the beginning: This marks the start of what may well be the comic line's single greatest and most auspicious year in print.
Share on Twitter Share on Facebook

I just read this out of that trade, man was it lovely. Out of all the stories, I think it might be my favorite. It just read like it was full of life and I totally could see why a 1980's show (let alone a 2010's) would not broadcast it. Damn sexism.

I'll be hunting it down now. As for "kid's" material comics being head and shoulders above tropish, cliched, studio-mandated television, you're preaching to the choir a bit. But I've at least found that growing up reading in general, whether it be reading text or image and text together by interesting writers (with more control and room to take risks) has always yielded more nuanced, emotionally mature storytelling. In varying degrees, of course.