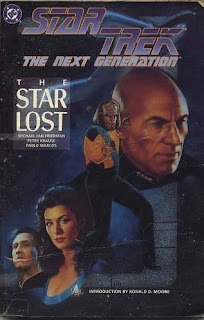 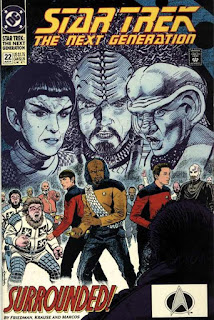 It's this middle section of The Star Lost, this issue and the next one, that I remember the least. The imagery of the first two issues is embedded within me so deeply I can't separate myself from it, and I distinctly remember how this story ends from a recent re-read of it I did on my own personal time. But the events of this pair of issues are a bit of a fog for me...well, more so than the rest of The Star Lost at any rate. There was a planet of mer-people I think...but they were up to no good. And there was Deanna Troi leading an away team mission in a diving suit...and she shares some telepathic link with a culture of friendly sea serpents.

But that, as it turns out, is all concerns for next time. Although we do indeed get to see Deanna beaming down in Starfleet Scuba to poke around a bit, this issue is largely about setting that up. In the process of relocating the Lanatosians, Deanna expresses concern to Captain Picard that she thinks they're hiding something important from them (especially as they seem oddly more concerned with moving a bunch of ancient statues than their own people). Jean-Luc has her go down to the planet and investigate, but requests she refrain from referring to herself as ship's counselor. Instead, she should refer to herself as Lieutenant Commander Deann Troi, head of the away team overseeing the relocation process. As the Captain says, “Hardly a lie, though we don't usually refer to you that way”. Before she goes, she gently reminds him that he needs to fill Worf and Commander Riker's positions on the duty roster.

Lest you think they are gone and forgotten, the crew of the Albert Einstein are in an interesting predicament of their own at the other end of the galaxy. As the shuttle approaches the starship construct, it gets snared in a tractor beam and dragged towards the structure. But just as the crew is trying to deal with that, a second tractor beam shoots out from the other end of the construct and tries to pull it in the opposite direction. There's a tug-of-war match between the two tractor beams for a bit before the second one ultimately wins out. This turns out to be a good thing, as the starship construct is soon revealed to be a colony of refugees from the alpha quadrant whose ships, like the Albert Einstein, were sucked into a time-space anomaly and deposited here and is firmly divided along pro- and anti-Federation lines.

Thankfully, the crew ends up in the pro-Federation side of things (though Worf gave their new hosts pause as they hail from a time before the Klingon-Federation alliance) as our heroes are informed by their new friend Darius Appolene, a Betazoid. Darius goes on to tell Worf, Wesley and Doctor Selar that not long ago another ship came through the disturbance, and though its occupants did not survive the journey, the ship's warp drive is still in perfect working order and could provide them a way back. Yet the construct's tractor beams are too weak to reach it, so Darius hopes the Albert Einstein and its still functioning impulse can tow it closer. And for good measure, he has them bring the comatose Will Riker to a sickbay facility where Selar and her team can provide better care for him.

It's with a story like this where the comic book line's debt to earlier forms of serialized storytelling becomes more evident. With the addition of plot developments like the starship construct colony and especially the mystery on Lanatos it almost feels like another story has begun here. Indeed, this issue even ends with Deanna getting locked in a cave Scooby-Doo style: Following a telepathic hunch, she finds the aforementioned friendly sea serpent people, who it turns out the Lanatosians are keeping sealed away for some reason. Now that she “knows too much”, she gets trapped in there with them. You almost expect to hear the Doctor Who stinger lead into the letters to the editor page. And yet it doesn't feel like The Star Lost is trying to pad itself out: That minor dual meaning of the title “Trapped” aside, it dutifully develops the threads it had already begun, just adding some new ones.


(Just an aside, this would bother me a lot more if I didn't know for a fact Deanna and her new friends think their way out of this situation instead of standing around waiting to be rescued. Doctor Who this ain't. Hell, the Star Trek: The Next Generation *TV show* this ain't.)

But if it's a weakness it's as much a strength, as this issue is another good example of the real fortes of doing Star Trek: The Next Generation in this medium. Lanatos is an incredibly imaginative world, from the designs of the planet itself to its society of mer-people to its off-putting fixation on totemism and materialism. All concepts which, building off of “The Lesson”, will come back later on in The Star Lost to further highlight and reinforce the ethical themes the story is exploring. Again, not only is this something the TV show could not for practical and logistical reasons do, its a further plea for science fiction to wed its ideas and imagery more closer to its politics, its storytelling and its heart.

And there's another way in which “Trapped” builds upon and adds nuance to the themes of The Star Lost. Life goes on, even after tragedy. It's not like the Enterprise has given up on the Albert Einstein, but it's also not like “The Tholian Web” where a similar situation was met with outrage, anger and blame. Star Trek: The Next Generation is older, wiser and slower than its predecessor; far more aware of and in tune with concepts like aging, flux and impermanence. It's odd, even though this Enterprise is only four years old and Kirk's was supposed to be over twenty, this one feels much more weathered, learned and experienced. This crew are a seasoned and mature group of travellers. They know people will enter and leave their lives, because they've seen it happen before, and this makes it far easier for them to cope. Life continues. New adventures will happen. Yet even so, Captain Picard isn't ready to promote Data. Geordi still misses Wesley. Pangs of memory and regret still make their presence known to your psyche every so often. Such is life, where the past stays with you always.

“And if there's a bit of gray and a wrinkle or two, so much the better.”

First time, a few years ago, I was trawling through my university sci-fi club's collection of Trek comics, just some random donations. There were a few original issues of this story, though not the first one or two, and maybe a later one was missing. I assumed the shuttle was lost in a previous adventure – and that's pretty much the case as regards the second story. It seemed strange at first to divide the focus between two distinct storylines, but IIRC they come back together.

It stuck in my memory though, because, a year or two later, I found the 1993 collection in a charity booksale for a few dollars and grabbed it to get the complete story.

Now I've started rereading it, up to this issue. It's pretty good, though doesn't strike me as much as it clearly does yourself. I've read a lot of tie-ins (they're the modern pulps!), and perfectly mimicking the style of the parent series, and doing it better, is kind of a basic requirement, IME. There's a lovely focus on the "lower-decks" characters on the shuttle that makes the Enterprise seem bigger, which is always nice. The story goes to great lengths to have characters tell us their feelings, or to tell us other characters' feelings (Selar seems to read Worf's mind; there must be something between them), which reads as quite odd or labouring the point, but I'm not sure there's a better way of doing this type of story in a comic.

There's a few structural problems at least in the second issue: crossing between two-hander conversations makes it unclear who's talking, like Worf turns on two entirely different people. And when the Vulcan officer informs Selar's parents, the whole panel showing his arrival is repeated, so he's invited in and suddenly outside again, yet somehow coming back. Did he forget something? I guess he should have been erased in the second panel, but it spoils the quiet, private, behind-closed-doors moment of Vulcan grief.

I'm looking forward to the rest again though.

I don't know about DC's superheroes, but their licensed stuff around this time was great. The Advanced Dungeons & Dragons/Forgotten Realms series could have been generic fantasy, but were sublime. IDW could really learn a thing or two.