Myriad Universes: The Worst of Both Worlds Part 2: The Belly of the Beast 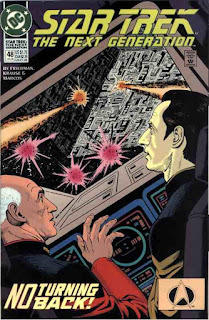 Although he sympathizes deeply with their plight, Captain Picard is reluctant to help Captain Riker and the crew of the Alternate Enterprise because he maintains his first duty is to his own crew. Captain Riker retorts that the dimensional portal will remain open for several days, which should give them plenty of time to strike a blow against the Borg collective while still being able to return to their home universe. As the senior staff weigh their options in private, Commander Shelby (who in this universe remained Captain Riker's first officer) leads an away team consisting of the alternate Chief O'Brien and Wesley Crusher to commandeer our Enterprise. Apparently, they're planning some sort of mutiny against Captain Riker, whom they feel is too weak and unwilling to take necessary risks.

But this team has other intentions too, as the alternate Miles and Wesley go to meet our Beverly Crusher (who in the alternate reality remained head of Starfleet medical and was likely assimilated by the Borg when they conquered Earth), Keiko O'Brien (who is dead in the alternate universe) and Molly (who doesn't exist). Captain Riker wants Doctor Crusher to join the rest of the senior staff on the alternate Enterprise, feeling that she's the only one who could break Locutus' link to the Borg collective (of course, she's already done that in our reality), and on the way over Alternate Wesley fills her in on some of the differences between her reality and his. Beverly notes that he's much more mature then her own son, but also far colder and more distant.

Back on the Alternate Enterprise, Captain Picard and the crew have agreed to help Captain Riker and his crew to fight the Borg, supposing that even though they've been “Shanghaied”, it is their moral duty to help a fellow ship out. We learn that some of the Alternate Commander Shelby's concerns may be warranted, as it's revealed a major reason this crew wasn't able to rescue their Captain Picard was because they didn't use an antimatter field: In this universe, Captain Riker dismissed Shelby's suggestion as being too dangerous, which meant that the shuttle he and this universe's Data were piloting got targeted by the Borg Cube straight away. The two crews elect to try the scheme again, though, after some debate, this time our Captain Picard and Data will undertake the operation, Jean-Luc feeling it's his responsibility to free his counterpart. Once they reach the Borg ship, Captain Picard reveals to us that being aboard a vessel so similar to the one he was imprisoned on three years ago with the Borg fills him with dread, but he feels he must steady his resolve and confront his guilt head on but calmly and steadily, seeing this as his opportunity to make peace with this trauma from his past. Annoyingly, however, once he and Data reach the core where the Captain remembers being stationed, the Alternate Locutus is nowhere to be found.

What's immediately striking to me about the way this story arc is shaping up so far is how prescient it seems. It almost feels like, with The Worst of Both Worlds, Michael Jan Friedman has seen into Star Trek's future and is pre-emptively rebuking a lot of the arguments that are going to be used to defend the franchise during its decline period. Simply put, the Alternate Enterprise crew are grimdark: Each and every one of them is a to-the-note quintessential 90s antihero, constantly monologuing through gritted teeth about how desperate times have called for desperate measures and they have been forced to forgo “non-essentials” like luxury, free-time and basic human empathy. And, in true 90s fashion, they never once shut up about any of it. This Alternate Enterprise crew is *absolutely* the prototype for Ron Moore's Battlestar Galactica and its crew of overly hardened, ends-justify-the-means antihero military survivalists and where Moore wanted to take the tone of Star Trek Voyager. The only difference is that, in Michael Jan Friedman's story, we're not supposed to idolize and admire these sorts of people. Oh sure, we *sympathize* with their plight, just like Captain Picard, but we're very clearly meant to be unsettled by these people and left a bit uncomfortable and uneasy with what they've chosen to do with their circumstances.

(I'm not sure of Friedman was consciously picking up on emergent grimdark themes and narratives in the popular media of the day: 1993 was still a bit early on in the cycle, the boundary point in the transition between the aesthetic tradition of the 1980s and what would become that of the 1990s. 1980s themes were still very pronounced in pop culture at the time, although landmark albums that would inspire the “Grunge” scene, like Stone Temple Pilots' Core and Nirvana's Nevermind, were several years old by this point and DC's own influential The Death and Return of Superman arc was in full swing by June, 1993. You could make the argument elements of grimdark date back even to the chronological 1980s, with Frank Miller's The Dark Knight Returns and Mamoru Oshii's The Red Spectacles among the early works setting a stylistic tone that would be widely imitated and misinterpreted. Or interpreted all too well in Miller's case.)

There's a particularly brilliant scene in this issue where Laren, who is working with the two Geordis to build a replica of the interface device that Doctor Crusher used to free Captain Picard in our reality, snaps and blows up at the Alternate Geordi for not trusting Data because he's a machine, just like the Borg. Laren accuses him of forgetting how to be empathetic and how to trust in others for support, reminding him that his own Data sacrificed his life for his crew, and that her Data would do the same in a heartbeat. It's a decisive criticism of the Wolverine-esque “I work alone” grimdark mentality that pervades this crew that's incredibly powerful and meaningful coming from Laren, and I love the subtle implications of her getting to direct this at the Alternate Geordi: Laren of course knows and loves Geordi, and while our Geordi oftentimes serves as a moral grounding to ease her out of her self-imposed loneliness and isolation, perhaps in an alternate universe Laren would be that for him. Maybe the whole reason she reacts the way she does is because she recognises the traits the Alternate Geordi has abandoned as the very ones that should be fundamental to his character, because they're the ones he taught her and that she fell in love with to begin with.

And naturally, its our Geordi who comes in and calms the incensed Laren down.

(I really like, by the way, how Friedman carefully balances his characterizations by drawing from not just the TV show, but his own prior work with this crew. Laren/Geordi comes more from him then even from "The Next Phase", and the fallout between Commander Shelby and Captain Riker is an excellent dark mirror of the parallels Friedman himself established between our Will Riker and Captain Lyrinda Halk back in "Thin Ice".)

This also marks a further development from Separation Anxiety, where empathy for your opponent was a central theme. Another level on which the Laren/Geordi(s) scene is important is that Laren was tacitly one of the characters who embodied this the brightest: As she is a survivor of the horrific Cardassian occupation of Bajor who grew up brutalized by the occupiers, yet who never descended into true racial hatred and violence as a result (another thing that makes Laren a fascinating contrast with Kira Nerys, and another reason I so wish DC could use Star Trek: Deep Space Nine characters and concepts, especially as this issue is coming the month after “Duet”), she is tacitly paralleled in opposition with Terry Oliver, who has held a bigoted vendetta against the Sztazzan ever since they were involved in a battle that destroyed her former ship. So is Miles O'Brien, who has a similar history with the Cardassians as Laren, and who also is playing a substantial role in this story arc.

But this is also evident in Captain Picard's scenes: Once again thematically paired with Laren, Friedman shows a Jean-Luc Picard *far* more willing to at least try to forgive the Borg and move beyond the grievous injury they wrought upon him then we might expect from his depiction in the TV series alone. In fact, it's Captain Picard who has to call out Captain Riker and his crew for some of their more extreme ideas and behaviours, including reprimanding him for wishing there was a “more painful” way to dispatch the collective as being both unnecessary and malicious. That he can say that given his own experiences and the maelstrom of emotions he's battling internally, it's a remarkable showcase of the man's strength of character. It's another jaw-droppingly brazen refutation of the ideas of the TV series, most notably “I, Borg”, although this time Friedman's story and concepts do weave themselves very elegantly into the fabric of the most recent episodes, namely “Descent”. Whether this was accomplished through keen foresight or dumb luck I'll leave for the readers to decide.
Share on Twitter Share on Facebook