Outside the Government (Death of the Doctor)

The Kickstarter has less than $1000 to go before Torchwood: Miracle Day gets the same thrice-weekly coverage that Sarah Jane is. I just added a new reward where you can get all four volumes of TARDIS Eruditorum in ebook form for $15, which is $5 cheaper than you'll get them anywhere else. 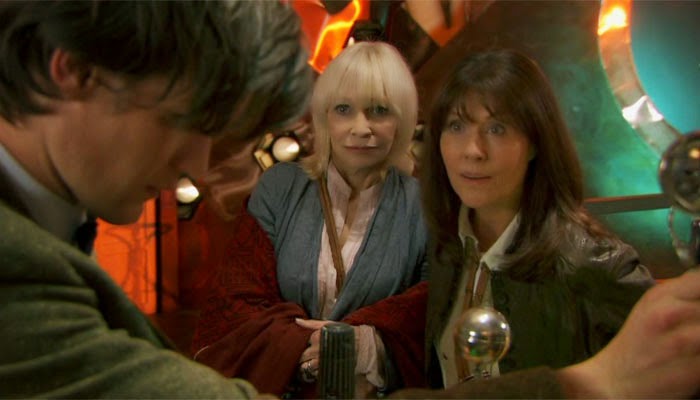 In particular, the sequence in which Jo and the Doctor make their peace over him not coming back for her is wonderful,

Well, except for the bit where it turns out that what we saw of Tenth's over-indulgent victory lap of companions was just the edited highlights and he also attempted to visit Jo, which implies he did the rounds of all of them.

And so the audience is necessarily on Sarah Jane’s side here, in that they know she’s right. And yet Sarah Jane is played as being absolutely pathological here, suddenly judging aliens by appearances and seeming to be mad with grief.

You get that a lot with comic book deaths. The more obvious it is to the reader that the character will be back sooner rather than later, the more the one character who says that is portrayed as denying reality. I suspect the thinking is "The reader doesn't believe this character's really dead, so we bring that up in-story and cut it off, and then they won't be so sure", but it never works.

The fact Tennant appeared in a year which was otherwise light on Doctor Who and Smith didn't raises a point I've been thinking about, which is that Matt Smith seems to have been insanely overworked in 2010.

There was no "Doctor-Lite" episode in Season 5 (although there was an "Amy-Lite" one). There was this. There was the recorded bits for The Doctor Who Experience. There was that beautiful bit at the Doctor Who Prom, which started out looking like a prerecorded skit in the style of Tennant's bit at the 2008 Prom, only for the reveal that no, he was actually there.

One gets the impression that Smith got mildly panicky if he woke up in the morning and realised he wasn't expected to be the Doctor that day.

Crash of the Elysium (the live-action Doctor Who show which Punchdrunk produced for Manchester International Festival) was around this period, and Smith recorded material for this too (as well as appearing live at one performance, although sadly not the one I went to).

Then there were the DVD extras, specially shot trailers, and the extensive promotional tours across the U.K. and America. And when he finally gets a moment to himself, what does he do but go off and star in a Christopher Isherwood biopic.

For all that fandom stamps its feet about getting slightly less Doctor Who than we feel we're owed these last few years, it at least had the tangible benefit of not working Matt Smith to death (or at the very least, to a state where prosthetics would not have been required in The Time of the Doctor).

What's interesting, too, is that this story is sandwiched, in Doctor Who terms, between Series 5 and 6. We've just watched the Doctor supposedly "die" when stepping through the cracks, and Series 6 will revolve around the Doctor "dying" at Lake Silencio. I wonder if this was intentional, or accidental? The Eleventh Doctor sure does "die" a lot.

I can't watch this now without feeling that the resolution with Liz and Katy hiding in a coffin is a sad piece of foreshadowing.

I have to say the Davies/Manning commentary on the "Green Death" DVD is just priceless. Those two are a hoot.

I keep trying to get my friends to watch SJA for its own sake but they don't want to bite, alas. They did like this, though.

Oh, and Santago Jones, phwoar, get thee to Game of Thrones immediately, and be sure to bring that little turquoise top with you!

While I liked the alien vulture costumes, I always thought they were a little too on the nose for the story.

boom does not fucking rhyme with moon

Speaking of sad foreshadowing, "Goodbye, Sarah Jane Smith" is even more so.

I'm sorry Davies didn't write for Smith on any other occasion. I don't particularly like Davies' dialogue in general, but Smith sells it. (Largely by going quiet at the big moments.)

It's not about death, at least in the sense of what it's like to lose someone, but I'd say it is about death in terms of the kind of experience it might be like. It's really about the Near Death Experience.

As mentioned above, there's the whole Coffin Escape bit, hiding in a coffin (a place of death) in order to escape dying. This, of course, is a metaphor for the overt plans of the Shansheeth, to prevent death from occurring throughout space and time. To stop the Memory Weave from creating a copy of the TARDIS key, the Doctor has Jo and Sarah Jane remember -- he has them remember everything. What happens is that their lives flash before their eyes, a classic representation of the near-death experience. The effect, however, is to present what the experience of dying may be like in a positive light, as something that's beautiful, at least for the person doing the dying. Indeed, it's rather self-aware about all this:

Of course, as Lewis points out, this plays right into the wheelhouse of Moffat's themes for the show -- his Doctor Who is loaded with near-death imagery and is especially focused on "remembering." It's fitting, then, that this episode features the Eleventh Doctor. If anything, it's like Doctor Who has breached the Sarah Jane Adventures, deforming its narrative in the way that happens whenever you drop the Doctor into any other kind of narrative structure.

There's a reason that Jo's husband is picketing oil rigs on the Ascension Islands.

'Price' does not rhyme with 'life', but:
'Landed gentry, county snobs,
Where were you when they lost their jobs?
No one marched or paid the price
To save a way of country life.'

Is still a great four lines. (Show of Hands, Country Life.
Show of Hands have a rock solid claim to appear in anything entitled Last War in Albion, but I've not seen any indication that Phil's up to speed on English acoustic folk.)

Yes true. Between this and that story death does feel like a big thread through these shows at this time. So great comments below Jane and great comment above Lewis. No wonder Goodbye, Sarah Jane Smith happened as result of Smith's Doctor bending the narrative of the SJA.

I can't help thinking about all of the amazing figures who have passed away from the world of Who in the last couple of years, so no wonder mortality has turned into a theme.

Thanks for the Narnia reference.

It is, at least, a near rhyme. That is the least of Katy Perry's atrocities.

I love the Shansheeth - I think they just about get away with them, puppetty though they are. I got quite a 'classic series' vibe about 'em.

Again, the foreshadowing in the episode is brilliant--what does Eleven spend season six avoiding but his death? And what is Miracle Day about? A world where the vision of the Shansheeth is fufilled.

Implied? He outright says 'every single one'!

Including, presumably, rescuing Adric now that he's capable of flying the TARDIS that accurately. (Sometimes.)

perhaps i'm alone in thinking that it is perfectly appropriate for Smith's Doctor, whose series tended to warp what we think of as "classic Doctor Who" into entirely new pretzel forms, to also deform SJA? And that, as the most alien of Doctors, he is greeted on screen with the brilliant opening shot of Tom Baker from Pyramids, the one where he declares that "he isn't human, and walks in eternity"? It all wraps so perfectly that its almost as if it was written by.... a fan of the series.

Tennatn's Doctor was in one of the most satisfying episodes of that season because he got dropped into SJA, a series that essentially is targeting the at the same level that the Pertwee series was under Letts. And it reads beautifully. Its the most satisfying episode of Who we got that year, and its an interesting version of Tennant: one muzzled jsut a little bit by the constraints of 1974 TV in its own retro way. He pulls it off quite well.

Smith's Doctor, however, has a bit of a tougher time fitting into that peg. His Doctor is an ontological paradox anyway, and he has a tough time getting muzzled into the format. The scene where he tells Jo and Sarah what he has done is a moment that the old series just wouldn't have done. Its OK that it pushes clyde and rani to the sides on this one, they have others to shine.

And the lead one is voiced by, of all people, David Bradley.