Outside the Government: From Out of the Rain 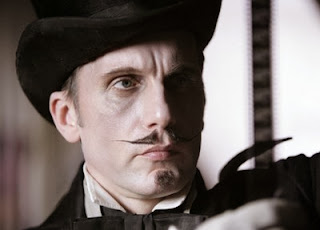 Nothing to add but applause.

As ever, a very nicely written entry. While From Out Of The Rain is a bit of an odd duck, it's probably my favourite of the season 2 Torchwood epsiodes but that's mostly because I enjoy PJ Hammond's writing so very, very much (of course I adore Sapphire and Steel, and wish he'd done more writing for telefantasy). There a lyrical touch to it that helps draw the ideas-first concept into focus while at the same time seeming both traditional and... well unsettling isn't quite right but there's something pleasingly off about the way the spaces are explored in this episode. It's not just "ghosts are rift activity", it goes much further than that and beyond a few rudimentary explanations we're not subjected to reams of exposition - the Travelers are what they are, and that's enough for this story. While I entirely agree that this could have been a script that would have functioned just as well in another show (The Twilight Zone seems like an obvious possibility, but this is very much in Sapphire and Steel's wheelhouse, with the obsession over time, decay, images and the way the past impacts the present), it does also function very well in this one, and Jack being haunted by an image of himself is especially resonant for the man that can't die. If it is a flawed episode, its flaws only make it that much more great to me.

what we regain is something more esoteric - the performances. We regained records of moments

Speaking whichly, one of my favourite moments in "Enemy of the World" is Troughton's expression just before he says "I don't think so, Miss Ferrier." (It's at 0:53 in the trailer.)

Are you familiar with Karl Popper's idea of "World 3"? Your blog often reminds me of it. World 3 is like Plato's realm of Forms, or Frege's Third Realm of judgable contents, except that it's materially grounded, so that for example the text of Hamlet is distinct from any physical copy or mental memory, but it will cease to exist when the last physical copy and mental memory do.

On that point, it should be noted that "From Out of the Rain" is obviously code for "Outform of the Rani."

After reading a fantasic piece It does seem churlish to point out that Duffy is a singer, not a group, and it should be 'collectors at rummage sales'.

The piece made me think about Scorsese's Hugo and the recent story about Pixar giving Ken Loach film stock to complete his current film.

This was my clear favourite from the second series. It's good to read an analysis of why, since I mostly just go with gut feeling.

Off-topic, you'll probably be pleased to know that I've just ordered Assimilate as a Christmas present for my brother-in-law. Maybe in another six months I'll think up some excuse to buy Flood...

Duffy is changing back and forth with each Eruditorum entry.

Yes, I'm up to this point in my Torchwood slog, and so more than a year after the last comment I'll post to future generations who will find this comment thread in some antique data storage device at a rummage sale and I'll emerge from it without, I hope, a sinister hipster stache and say that I loved this episode and I loved your essay on it.

I don't know if it's true that this type of TV horror is dead, largely because I don't watch much TV horror and there's quite a lot of it all of a sudden. I assume that American Horror Story, Penny Dreadful, and their like are all doing character-driven arcy stuff (from what I've heard, they must), so I figure you're probably right. It's hard to refute the argument that we're better off looking forward -- I would say that of these past two episodes, I did at least marginally prefer "Something Borrowed" -- and yet this does have such a wonderful texture to it, much the way "Mummy on the Orient Express" did, and I wonder as I always do if we can have both.