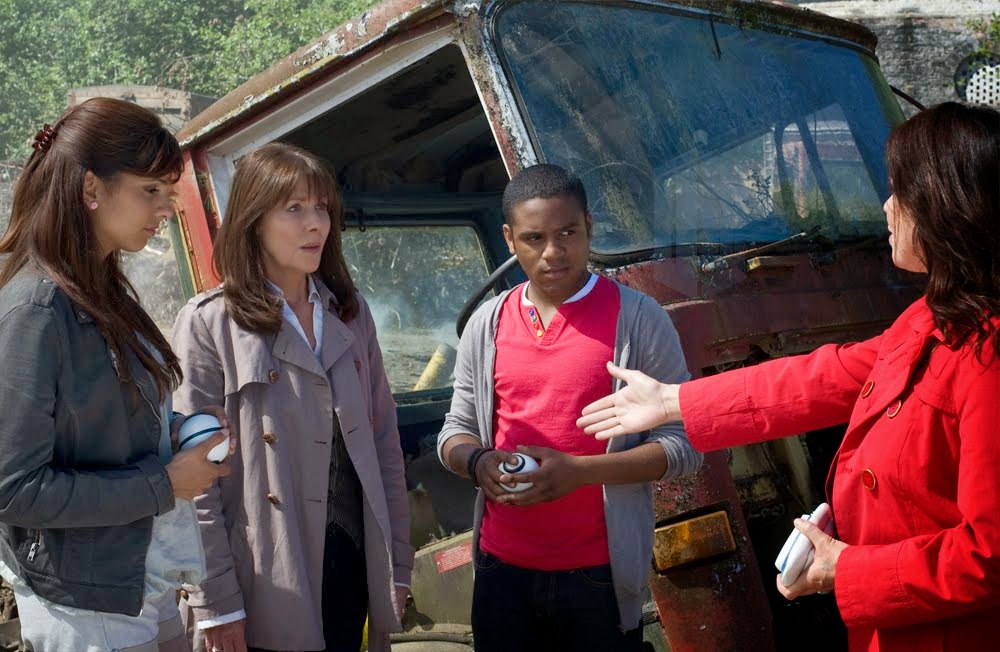 As a relatively new parent, I love the wealth of children's literature and entertainment that's out there. If all we had was bland, boring junk designed to "teach a lesson," I think I would have to write everything for my son myself. It's so disrespectful towards kids to think that they can't process anything that's "scary" or "dangerous." As you say, it's the "scary" and "dangerous" things in kids' literature that make it possible to process the actually scary and dangerous things in the real world. I think that's what makes it so appealing to adults as well. While entertainment like The Wire is brilliant, sometimes I want to know that there is some hope of beating the monsters in the world.

One thing I also like about this one is the title; by this point, we'd come to expect the Trickster - I mean, Gareth Roberts and Sarah Jane's name in the title was a big clue. So I watched, and loved it of course, but I watched expecting to see the Trickster. I was then slightly sad ... and excited because of his non-appearance: I liked that this show could still wrong-foot its audience (a lot of people were expecting the Trickster, from what I gather) and it could still tease us with "aha, you think you've worked us out?" - I also like that his absence means he's now retroactively left with a trilogy. The Trickster trilogy, and it's great.

As for the story being 'business as usual', I wish the parent series would learn from this. I like the scale here, and whilst it has 'finale-esque' moments, it's still just a regular story and it works a treat. You don't always need OTT bombast.

Who says this is bearable?

“generally speaking people who produce children’s media that embraces reproductive futurism should be shot in the face.”

Yes to all of this.

The other thing that struck me reading Philip's fine post was that the sense of appropriateness here matched my feelings concerning Caroline John's final work being The Last Post.

Oh, and thanks to Philip for explaining reproductive futurism here. I had a much vaguer (and more defensible) idea of what it meant which turns out to be completely wrong.

One minor point re Clayton Hickman: he actually makes the jump from editing comics and writing audios, including one of my favourite early Big Finish stories, so it's not like he hasn't done Doctor Who scripts with Gareth Roberts before.

And, of course, a younger version of Sarah Jane takes over and the real one is manipulated into feeling she should quit is a very Trickster plot.

Another nice touch was making Ruby more antagonistic at the outset, and gradually warmed up to the gang. If she'd been friendly from the start it would have made the audience very suspicious, but instead Gareth leads us to believe he's *dealt* with "What is her problem?" and moved on.

(And these two ideas mesh quite nicely, with the audience thinking maybe Ruby *is* a nice person - or at least not an outright evil one - and just being manipulated by the Trickster.)

"The people in power are usually the first against the wall when the revolution comes."

But not the last.

Not by a long chalk.

Case in point: Alan Garner's Elidor scared the fuck out of me as a child. And I will remember it forever because of that. It was scary and beautiful and became part of my mental landscape, to the extent that after not thinking about it for years, I picked up the book fairly recently and remembered it all.

I'm not sure I understand the issue about reproductive futurism. Apart from the scoundrel's defence of regressive politics (the UK's Clause 28, Russia's law against 'gay propaganda'), I can't see that equating 'danger to children' with 'ultimate, scary threat' is problematic (provided it's not also reductive). Edelman's examples, the threat to Tiny Tim in A Christmas Carol and the menacing of children in The Birds, don't remotely suggest championing 'the absence of political engagement'. The pram hit by a car in Torchwood and Jack's killing of his grandson at the end of Children of Earth aren't political engagement, unless you dress them up as such by reference to Edelman's paper tiger. For me, the message of The Sarah Jane Adventures is that in the real world, the Doctor's alchemy isn't achieved by regeneration, nor is it necessarily achieved by having children (Lis Sladen did, but Sarah didn't), but by the material social progress of sharing and passing on your stories to others (particularly children), you make ensure they outlast you and so live on forever.

Daibhid C: "Another nice touch was making Ruby more antagonistic at the outset, and gradually warmed up to the gang. If she'd been friendly from the start it would have made the audience very suspicious..."

It is a nice touch, but I think it goes beyond being a red herring. I always took it as strengthening the many parallels between Sarah Jane and Ruby (even the name "Ruby White" has shades of Andy Pandy). Remember that back in Invasion of the Bane, Sarah Jane herself began as a more aloof and distant figure (one of her first lines was "Er, I hope you're not going to make much too noise. It's just I work from home, and I don't like to be disturbed.").

I wouldn't put it past either Roberts or Hickman to be consciously aware of this plot point's double-duty.

At the time I did find something interesting going on in the undercurrents of the show - and the is not added retrospectively, I did think this at the time - where in TDotD Sarah Jane saves herself from death by using a coffin, the symbol of death and in this story she is diagnosed with an incurable illness. It just felt like death was hanging around and the show was really exploring its own ending, despite it being produced with such a verve that spoke of it simply continuing on and on.

I am not suggesting that this was a presentiment of Elizabeth's own death, but maybe the team producing the show were dancing on that ledge of ending because they were looking at taking the show into some entirely new places in the next series?