Outside the Government: Mona Lisa's Revenge 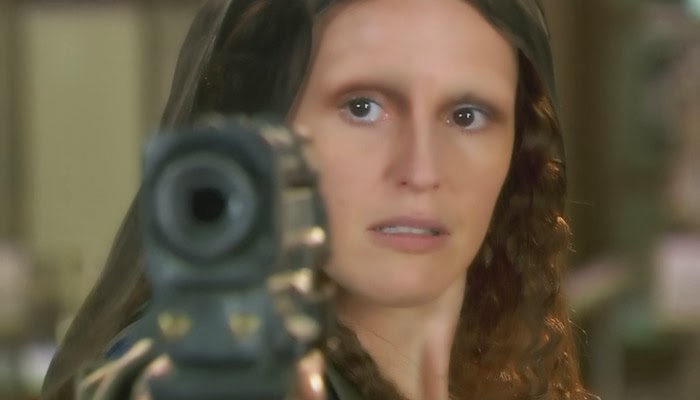 It's an odd one alright. Suranne Jones' performance is excellent as always and yes, this is the episode where Clyde really becomes a nuanced character who can now be trusted to carry his own story arcs. Perhaps fittingly for a story about drawing there's a stylised comic book attitude to this one which taken together with the previous episode's Scooby Doo scary mystery mise en scene is where the SJA discovers a parallel ability to its parent show to crash fictional genres. In SJA's case childrens' fiction.

I remember really enjoying this at the time. Sadly, all I remember now is an argument online with someone who insisted that Mona Lisa should be speaking with an Italian accent, and the fact she was instead Mancunian meant the whole thing didn't make sense.

Which, I mean ... okay. Let's set aside that Random British Accents is a decided Whonoverse thing. Let's even set aside that "making sense" in a story about the Mona Lisa coming to life because alien paint is, perhaps, not a goal anyone was aiming for, and therefore not one they can be blamed for not hitting.

Because, actually, there's no reason within the story why Mona Lisa would be speaking with an Italian accent. It's made very clear she's not in any sense Lisa del Giocondo, she's an alien made of paint. Who obviously comes from one of those planets that has a North.

It felt very annoyingly to me like the production team was screaming "AREN'T WE CLEVER, HAVING GIVING MONA LISA A LOWER-CLASS-CODED ACCENT INSTEAD OF MAKING HER SOUND POSH? CLEVER! CLEVER!"

Just wanted to slip in here again and politely request once more that Phil revive the TARDIS Eruditorum video review thing when we get to "The Eleventh Hour", just to do a similar comparison between the aesthetic styles of that episode and the RTD era that Phil did in his "Leisure Hive" and "Time and the Rani" articles.

Maybe. I'd like to. But argh, deadlines argh argh splat, basically.

Worth comparing & contrasting with the Splatter Phoenix episodes of Darkwing Duck?

Besides... if you wanted help, we could always provide it. :-)

I just don't know how they managed to resist the temptation to have someone discover that "Mona Lisa" has "THIS IS A FAKE" tattooed on her back.

Indeed, there’s an odd ethos going through this story in general - the art that is straightforwardly animated is all realistic art, whereas non-realistic art is treated as nightmarish.

"This is the problem with the impressionists -- not accurate enough. This would never happen with Gainsborough or one of those proper painters."

Only if you equate northern British with working class. Which is problematic. Middle and upper middle class northerners do exist. To the nuanced British ear certain northern accents denote new money rather than underclass. Jones is using her own accent. I doubt the production team, by which I guess you mean the director, were that bothered. They might have discussed it with her but unless the script specifically called for an 'upper class' accent it would not have been an issue.

Diagetically though it's a different concern. Is there an SJA equivalent to the 'gift of the TARDIS' translation conceit for visiting aliens?

Actually, this episode does come up as a brick joke in Death of the Doctor--while Clyde and Rani are reminding Sarah of all their adventures, Clyde says "The Mona Lisa;" after the tension's over, the Doctor blinks at Clyde and goes "What do you mean, the Mona Lisa?"

The comment about K9 not being K9 because he was produced from a drawing of K9 reminded me of René Magritte's The Treachery of Images.

The natural followup would be a print of Clyde's picture with the caption "Ceci n'est pas une K9."