Outside the Government: The Blood Line 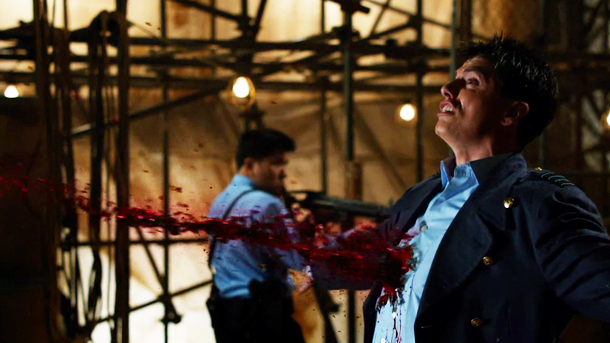 Will you be covering Web of Lies, the iTunes animation which is on the dvd. That's really very interesting in the context of authorship, casting and the connecting tissue between Anglo and American Torchwood.

Not having watched the episode since it aired: what is "the breath"? The moment when everyone stops being immortal, yes, but what happens on scream?

...did you mean the blessing?

"To, five years after you left the scene, be the obvious target that everyone is trying to outdo and surpass is the mark of a giant."

Very true. It reminds me of Terry Pratchett's remarks about Tolkien's inescapable influence on the modern fantasy genre being like Mt. Fuji in Japanese art: It's always in there somewhere. Sometimes it's huge and overwhelms the picture, sometimes it's a speck in the distance, and sometimes you can't see it at all and that's because the artist is standing on top of it. Maybe Davies' influence on the series now is like that last one - we can't always see the correlation between his approach and the current writers', but that's because they're standing on his shoulders.

My one quibble - I do think Davies successfully handled one death scene - The Master's. Yes, the climax of the Last of the Time Lords has its issues. And yes, Davies brings the Master back later (although at the time he didn't know he was going to do that). In the moment, for me anyway, the Master's death scene is powerful.

I think it's this bit, Gwen's speech.

"And that's what I did. In a pit in old Shanghai I brought death back to the world. They said it was like a breath. The breath that went around the whole wide world. The last breath. And then no more. We said goodbye to them then, the dads and the mums, the sick and the old, the friends and the neighbours, and the people we once met, and the people whose names we never knew. We said goodbye to them all on the day that death came back."

Russell pitched a Doctor Who graphic novel for the 50th. Shame that was rejected and turned down. He never said why, but I suspect it may've been Time War-related and they perhaps worried it would 'clash' with the upcoming TV special? In any case, Russell's a great artist and it would've been nice to see a story by him for the 50th as a big final 'hurrah'.

I also want him to pen an episode for Peter Capaldi - even more so knowing that he's such a huge fan of him.

So, Phil, is it correct to say your opinion of Miracle Day took a plunge as you watched it a second time?

There is a rumor that he might for the tenth anniversary of the new series. (Or maybe more of a whispered half-hope. Like the Peter Jackson thing.)

Everything I've heard says the Peter Jackson thing's moved past rumors and hopes and into serious negotiation at this point. Given that a New Zealand production would probably eat up the whole location shoot budget, they're wise to keep kicking the can down the road.

It's clear they're hoping for Lord of the Rings Jackson, but I personally would love a look in from Frighteners Jackson. In a lot of ways, he has the personal range to match a Doctor Who episode in that sense, sorta like Danny Elfman.

... look, I have certain allegiances, alright?

Phil, I hadn't expected this RTD post here. Spot on.

There - that's my quota of praise for today, I'll go back to being grumpy now.

OMG does anyone think Capaldi's opener "Deep Breath" will be set around The Miracle then?

I agree, Jarl - I think he has the right sensibility to match the current show's cinematic visual sweep with campy over-the-topness. I'd love to see a PJ-directed episode.

As I understand it, based on James Moran's blogging at the time, Children of Earth was done in a collaborative, writers-room fashion. Each episode had a lead writer, but all the writers contributed to all the scripts. Specifically with respect to Ianto's death, he said something like "We all had a hand on the lever".

The Shadow of Mount Fuji: that's a Vashta Nerada story right there! :)

Torchwood: Miracle Day is something of a black sheep in the Doctor Who franchise. It doesn't really fit in, either canonically or thematically, and the poor critical reception combined with the difficult-to-resolve cliffhanger make a sequel seem unlikely. Indeed, many fans (and many BBC writers) seem to have decided to just ignore MD's existence.

It was the odd coincidence of this series with the death of Elisabeth Sladen cause the removal of RTD from the "Whoniverse", as both vestiges of his era died almost simultaneously.