Outside the Government: The Day of the Clown 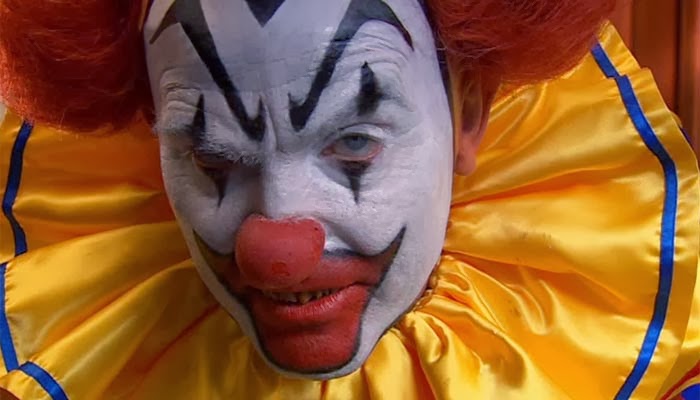 A strange thing about this story at least to British TV audiences was that Odd Bob was played by Bradley Walsh, best known as a presenter of teatime gameshows and the entertainment vacuum that is the weekly National Lottery draw programme (apparently he did have a stint on Coronation Street a few years previous to the SJA but it passed me by). I'm trying to think of an American equivalent. Remaking IT with Ryan Seacrest, maybe.

Dear Lord, given the importance that Bradley Walsh is going to have in the near future of Doctor Who I hope he never reminds us of Seacrest, the most pod-person celebrity I can think of off the top of my head.

Pity they couldn't get Jimmy Savile.

You win this years Nobel Prize for Bad Taste sir!

And while public opinion tends to be split on Martha, I don't know of anyone who really hates Rani. Granted, that may be due to the smaller audience of the SJA, but I think Rani fits better into a pre-existing structure than Martha does. The lack of a love triangle helps some.

I think you'll find that's "fan opinion tends to be split on Martha." I don't think the public were as bothered as the fanbois on GB about the fact that she wasn't Rose.

As for Rani, she's a great character, and makes an excellent double-act with Clyde, alternately playing the part of his older sister or his best friend. Their relationship develops so well over the rest of the series, staying just the right side of Teen "yuk" territory. I'm so pleased that both Anjli Mohindra and Daniel Anthony have moved on to other drama since SJA as I always thought they had potential.

It bugged me a bit, especially after 'Whatever happened to Sarah Jane', that Maria was basically forgotten and replaced, but Rani never really felt like she was trying ot be the replacement goldfish, whereas Martha was largely defined in terms of "she should be fine, but she's not Rose"

I think Rani was immediately accepted because she has great chemistry with the cast and places no narrative burden on the show by joining it -- she steps right into the verve the group has developed instead of making the show stop so she can have an acclimatization period. She participates in advancing the plot rather than hindering it with her newness, a fault many late-addition characters suffer from that builds resentment among viewers.
Plus she's just fun and I love her mum!

This is the beginning of the slow drift towards Clyde being the main character of the show though.

The comments about the idea of children being kidnapped being scarier for the parent than the child reminds me of Neil Gaiman's comments on his book Coraline. In the book, a little girl wanders into the realm of the "Other Mother" because her parents are a little distracted and overworked. While the Other Mother seems wonderful at first, she turns out to be evil and wants to keep Coraline in her world. Gaiman said that parents found the book much scarier than their children - and sometimes wouldn't allow them to read it, even though the kids were fine with it - because having your child kidnapped is much scarier of an idea than being kidnapped. I think with that book, it's particularly true because Coraline is kidnapped in part because of her dissatisfaction with her parents and the associated guilt, but I don't know if that applies in this case. As a new parent, I can definitely say I'm much more panicky about things happening to my child than I would be about things happening to me.

To highlight the underlying absurdity of the notion of "deserving" in this context.

I have to say that I was so happy when Rani's character and the actress playing her came along. I just did not really enjoy Maria that much. And yes I think it was the chemistry between her and the other leads that really worked and kicked things off to a new level. Oh - and Rani's mother who I adore!

there's something about Sarah Jane taking the place of a kind of mentor for Rani which I kind of like.

I remember one particular thing in this story that I found sort of shockingly horiffic. It's this moment where something utterly functional that I suspect no one thought too hard about crosses over into abject horror. Plot problem: Oddbob makes children vanish into some weird timeless pocket dimension. Plot solution: destroy Oddbob and the kids come back because destroying the monster magically undoes everything it did, a la Power Rangers. Complication: Oddbob's been doing this for centuries, so won't that leave us inundated with a bunch of kids pointing up in the sky and screaming in terror about the iron birds? Mercenary solution: Oddbob says that the kids he's trapped simply cease to exist after a while.

Bang. Holy crap, this is now the scariest fucking TV show ever.