Outside the Government: The Empty Planet 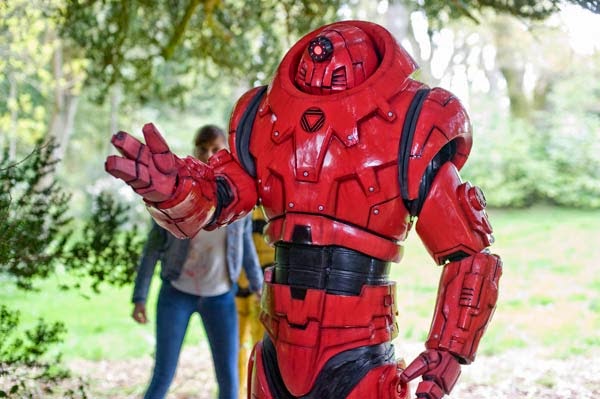 Even though the Sarah Jane Adventures is finished, it's episodes like this that make me (and I'm guessing there are others out there) want to see more of Clyde and Rani.

First episode: They run into trouble with the Judoon for unauthorised space travel, but they manage to save the day and get their privileges reinstated.

I look forward to their inevitable Big Finish spin-off series.

I love the focus on Clyde and Rani, and I think they could've perhaps made a crossover cameo into Doctor Who proper had Russell still been at the helm with regular series.

There's a Wizards vs Aliens episode (The Thirteenth Floor) that was originally planned to be a Clyde and Rani story (IIRC, their exit story).

Phil: have you read the Sarah Jane DWM special, wherein all the plans for future Sarah Jane episodes were laid out, with "The Thirteenth Floor" and "The Battle for/of Bannerman Road" and the return of Ace/McCoy's Doctor, etc.? It's a great read, and I know it's maybe not your thing, but I think the 'planned but not made' stories, with the amount of info we have about them, could make a fascinating blog post by themselves.

I was just thinking of these - Phil's been arguing that The Sarah Jane Adventures was reaching its natural endpoint since the start of the series, yet they had plans for at least up to series six. I almost want them to release a comic series or novelisations of these stories just so I could see how they were planning to finish the series. And the introduction of Skye does suggest they were trying to evolve the series a little by shaking up the cast. With all that said, I couldn't see the extra stories stretching beyond a sixth or seventh season, so I can see the argument for this period being the beginning of the end of the show.

Anyone who enjoys SJA should definitely give WvA a look-see. It isn't a straight copy of SJA by any means, but it has the same DNA running through it like a stick of Blackpool Rock. I'd forgotten The Thirteenth Floor was originally planned for SJA. It was definitely one of the best (if not the best) WvA story of both seasons, and transcended its "Childrens TV" orgins sublimely. Looking back on it, I can so see Clyde and Rani in it, and it would have very bravely played on the hinted affection the two characters have for each-other.

And if you bring the magazine companion into it, it's quite obvious that they were willing to try some really drastic things, including changing locations

Ah yes, good call. I think at one point, Russell considered moving them away from Bannerman Road (presumably after the Battle Of). Would've been fascinating!