Outside the Government: The Gathering 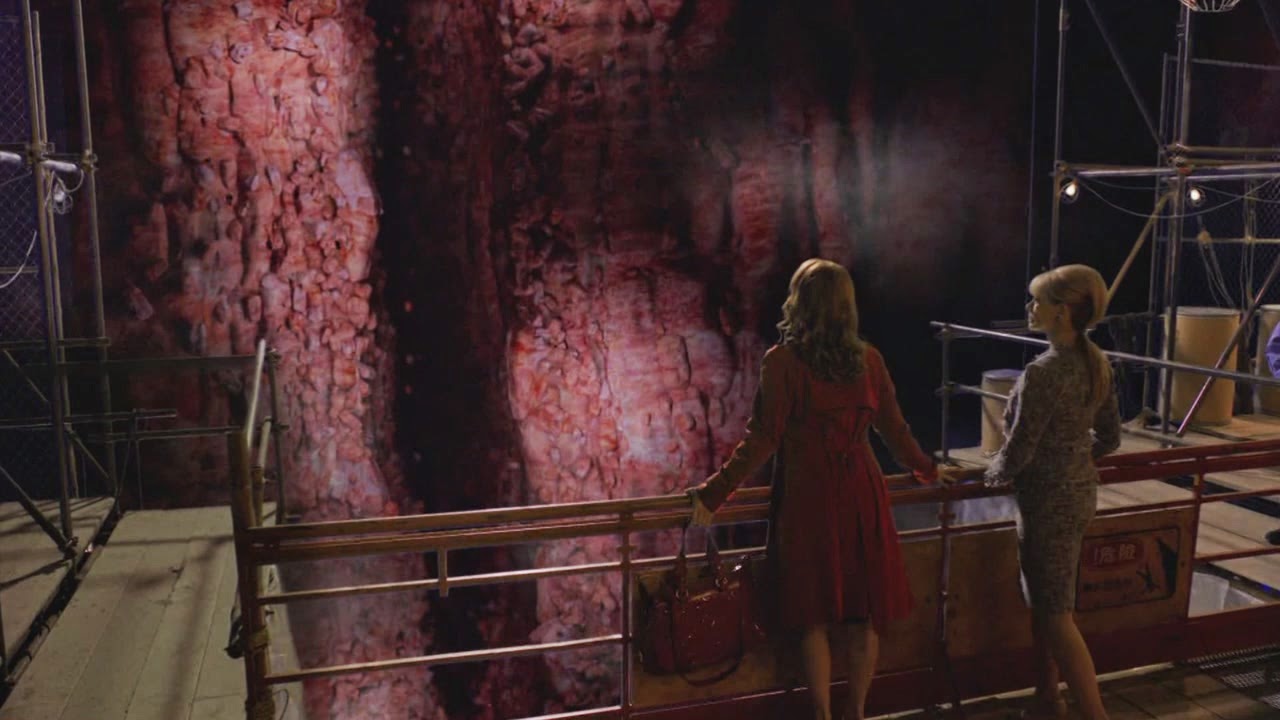 It’s September 2nd, 2011. Katy Perry is at number one with “Last Friday Night (T.G.I.F.).” In the five days since Let’s Kill Hitler aired, the Battle of Tripoli wrapped up. That’s about it. And Miracle Day ticked one week closer to being over, of course.
It being an odd-numbered episode, tit’s time for the show to revamp itself once again, with characteristic subtlety. Now we’re in a big metaphor about the financial crash. Way back with Partners in Crime, I suggested that Davies got very lucky with Donna, creating a character who was visibly about the anxieties of ordinary middle class people in a declining economy. Now Davies has the exact opposite luck: he’s decided to make this show focus on the financial crisis, and he ends up doing it after the London riots and two weeks before the Occupy movement kicks up. He’s almost, but not quite, as completely screwed over as Mark Gatiss is in this regard, but that’s for Monday.
It’s not that Davies’s approach is wrong in light of the Occupy movement and all of that. But there’s something casually jarring about it. The empty streets and quiet resignation of the world isn’t a bad guess for what the world would be like in the wake of crises like the ones Torchwood has shown, but it’s a guess that lacks all of the immediately compelling and arresting imagery of the world it’s being transmitted into. Even before you take up any questions about the quality of what “The Gathering” has to say about the world, you’re stuck with the fact that summer of 2011 just doesn’t quite feel like the time to be saying it. It feels not entirely unlike the Pertwee era in Season Eleven, or the Troughton era in Season Six - however good it may be at a given moment, it’s become a tired and old-fashioned sort of show.
One need only look over at Doctor Who to get a sense of this. However awkward Let’s Kill Hitler may be, almost nothing about Doctor Who in this era is playing it safe. Whereas Torchwood feels the exact opposite at this point - like it’s just using a well worn playbook with minor variations to tell stories that, if they’re not past their sell-by date, it’s only because someone slapped on a new label with a later date. To be honest, the biggest impact Miracle Day has had so far was keeping A Good Man Goes to War from using Jack like it was originally intended to. This isn’t a show that knows why it exists anymore, save perhaps to be a big American co-production. It exists to try the formula that worked in the UK in the US, in the hopes that it’ll make more money. And even that’s been quietly usurped by Doctor Who, which has finally hit it big in America and had major episodes done with co-production money from an American network.
So we shuffle grimly towards a finale in which everything has been arbitrarily reconfigured yet again. We’re on the fifth premise for the show, and it’s miles from where we started. Indeed, the “nobody dies” thing has effectively been entirely abandoned, such that people talk casually about killing with only occasional use of the phrase “category one” in order to nod at the core premise. We’ve been through “introduce Torchwood to Americans,” fighting conspiracies in LA, the camps, a story about Jack’s past, and now we’re on a sort of trumped up “this is the final battle” plot because that’s what goes at the end of a series. But there’s no ideas left. The series is wrapping up with structure, not with content, coming to a conclusion that is ultimately defined by the narrative conventions of a season of television, as opposed to something that comes organically out of what’s gone before.
Share on Twitter Share on Facebook

If losing Jack is why we got Jenny and Vastra, that's the single greatest good thing Miracle Day did for the world.

"If losing Jack is why we got Jenny and Vastra, that's the single greatest good thing Miracle Day did for the world."

Agreed. The character of Jack that Moffat created and wrote, introduced in The Empty Child, (the irreverent, flirty, ambisexual, casually time-travelling anti-hero from the future, with potential as a recurring character), is a million miles away from what he became under RTD in, first, Utopia and then Torchwood (the literally indestructable but, in practice, inflexible due to his self appointed role as some kind of Spy-Fi cop, protagonist/hero with 'secrets' and 'angst' and an inability to deal with the consequences of his priapic conquests who is regularly sidelined to the edges of his own narrative). Basically he went from Captain Sparrow to Captain Scarlet.

Funnily enough, Moffat was going to have the Headless Monks behead Jack in "A Good Man" to show how he eventually became the Face of Boe. Miracle Day stopped that. Good or bad, you decide.

Do we have an actual source on that, or is it just theory and hearsay? I know Moffat wanted Jack in AGMGTW, but I don't remember that detail being thrown around before.

Not really disagreeing, but Torchwood came before "Utopia", didn't it?

I couldn't find you the exact quote but I believe Steven said it himself in DWM :)

Yup, the final episode of the first series of Torchwood led more-or-less directly into the start of Utopia

I am now imagining Captain Jack asking 'Where is Jessica Hyde?'

Are we going to get a 'Pop Between Realities' on C4's Utopia I wonder? Best show on TV at the moment.

I never cared for the "Jack becomes the Face of Boe" idea. Among other issues, it makes Jack a dick for giving the Doctor the cryptic clue "you are not alone," instead of simply saying "The Master is hiding in the body of a Prof. Yana in the year Five Trillion." My preferred idea is that Jack's friends at the Time Agency did call him "The Face of Boe" but it was a joke comparing the good looking young cadet to the intergalactically famous Head-In-A-Jar whose existence was well known in the 51st century.

"However awkward Let’s Kill Hitler may be, almost nothing about Doctor Who in this era is playing it safe."

That may be true for the Moffat-written episodes, but I'd have to disagree more generally - my biggest problems with The Curse of the Black Spot and Night Terrors are that they play it far too safe.

I think Jack was supposed to be Captain Avery.

I'm not the one to be a grammar Nazi, but I think it might be for the best that I point out that the first sentence of the second paragraph says "tit's" instead of "it's."

Retroactively "You are not alone" could be referring to the fact that Gallifrey is hidden not destroyed. I think that makes more sense as the whole YANA thing is a pretty nonsensical clue relying on condensing his words into an acronym. Which like you say is stupidly cryptic.

Neither is really "playing safe" though, certainly not at the conceptual level. Black Spot takes a huge turn in style, tone, even genre when the Doctor, Amy, and Avery embrace death and pass through the looking glass. It becomes a completely different show -- not to mention providing extended metaphors for "near-death experiences" and in fact the show itself. Yes, many of the specific dramatic beats are "safe" but the story as a whole is not.

Likewise, Night Terrors continues the very un-safe running theme of Series Six, which involves the monstering of Amy Pond. Amy is literally transformed into a "night terror" after advocating violence as a means of getting past the little devils. And again we get a shift in genre at the climax, as the "haunted house" story becomes a "coming out of the closet" metaphor.

And then there's how the "non-arc" stories of the season (with the exception of The Doctor's Wife) rather play out as metaphors for the characters' psychologies regarding the season's arc. TGWW is surely the most obvious, functioning as a way for Amy and Rory to come to grips with the consequences of their desire to save their lost child from the fate her adult self has already accepted. But even Black Spot foreshadows Amy's upcoming "near death experience" when she's sonicked from the Flesh, and Night Terrors we get a parent coming to deal with having an alien child -- again, an issue facing Amy and Rory.

All of which is to say, compared to how RTD (or JNT or even Williams) structured the stories in "arc seasons," even the fairly disjointed Series Six is far more engaged and integrated with the overarching themes.

Oh Jane, you're back.

That last line is a damn fine encapsulation of the Davies era, right there.

This comment has been removed by a blog administrator.

Ah well, you could always argue that as an ex-Time Agent he's well aware of the dangers of changing the timeline, and since as the Face of Boe he remembers the events of Utopia/Drums/Last he would make sure he didn't do anything to change them. If that involves muttering "You...Are...Not...Alone" on his deathbed then so be it.

All right. I'm sorry about that; not enough hours of sleep and too many hours of work. :-S

Well, it IS Torchwood...

By this point I was more watching this out of habit and wonder at "how on earth will they draw this together, than feeling gripped or engaged at all.