Outside the Government: The Great Game

For the record, The Sarah Jane Adventures will start coverage next week with an Outside the Government, with The Nightmare Man running on Wednesday. There is still just over $1000 to go on the Last War in Albion Kickstarter before that run will be upped to thrice weekly - it would need to do that by a week from today in order to impact the first week's posting schedule. 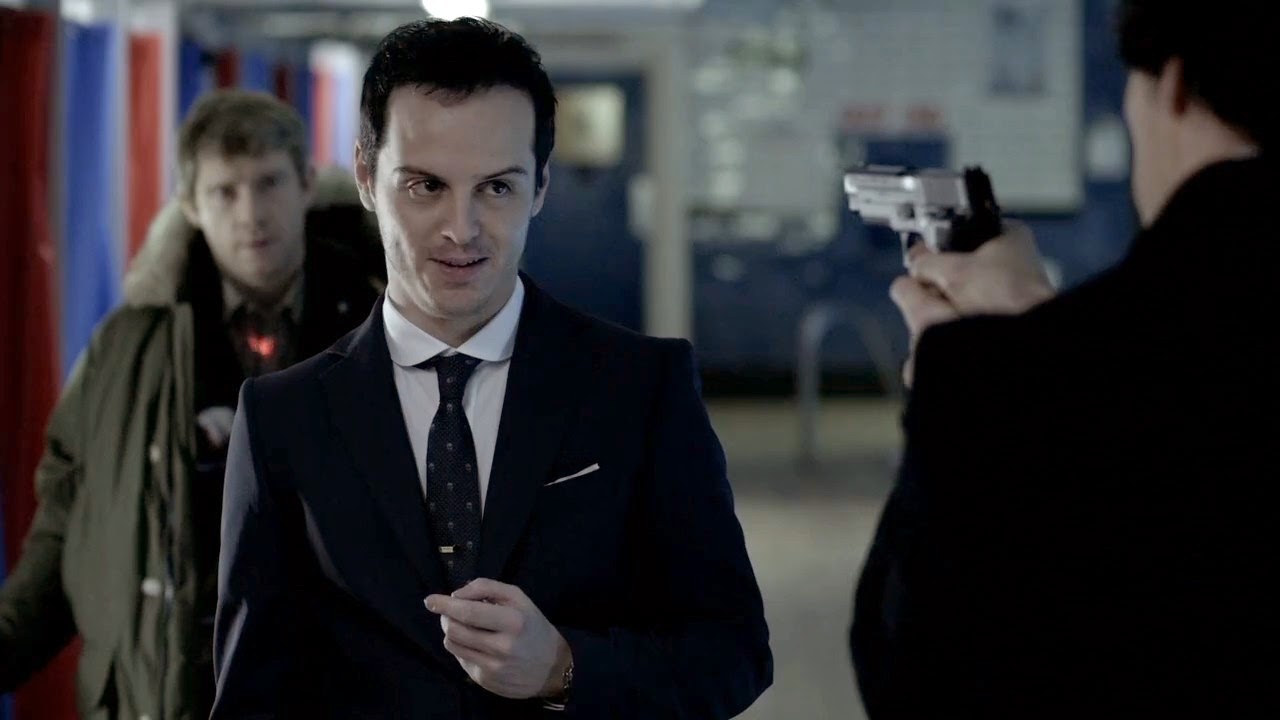 One paragraph seems to be cut short - the ninth, including the kick starter one - ends "Like the previous four cases, there’s a real care and"

I wish I could add more - sadly Sherlock is still on my "to watch" list as life has been too eventful these last few years to the point where we haven't had a TV in the house for at least the last month and it's not been missed.

The entire episode is thus building to the Moriarty reveal. Crucially, the show has the advantage that it actually has a good Moriarty reveal in mind, slyly nicking Russell T Davies’s revision of the Moriarty concept away from the ultra-posh mastermind and towards a character defined primarily by being starkly and terrifyingly mad. Andrew Scott’s Moriarty, with essentially only a single scene, immediately becomes a triumph of a villain, more or less selling the entire character concept with his brilliant sudden flash of utter fury on the line “that’s what people do.”

Sorry, I'm probably in the minority, but I couldn't disagree more with this. I loved this episode right up until the end when "Jim" Moriarty shows up and acts like such a cackling loon that he makes the John Simms Master look like Francis Urquart. Instead of the Joker playing the Master, it's the Joker playing Moriarty. I blame Alan Moore.

The original (book) Moriarty had a ruthless but pragmatic intellect. He goes to great pains to conceal his existence at all, and when Holmes deduces it, he goes directly to Holmes' house and basically says "Don't interfere in my plans or I'll kill you." And the next time Holmes interferes with his plans, he kills him (yes, Holmes gets better, but only due to the writer reluctantly giving in to fan demand). That's what a proper villain should do instead of gibber around like a fool who plainly cares more about getting into Holmes' pants than anything else. And we haven't even gotten to "Reichenbach Falls" yet, a story where the idea that "Moriarty is CRAAAAAZZZYY so anything can happen" drives the plot into a state of such incoherent nonsense that I honestly thought the whole episode might have been a hallucination Watson was having due to his exposure to the "Baskerville" gas.

Possibly worth noting: just before Sherlock meets "Jim" in the hospital, we see Sherlock through a window, as though someone's watching him. That's a subtle clue that Jim=Moriarty.

Holmes gets better, but only due to the writer reluctantly giving in to fan demand

I've never been convinced as to how reluctant ACD really was to bring back Holmes. If he really wanted to kill off Holmes, he would have had Watson find the body. It would have been very difficult to bring Holmes back after a trained physician (so not likely to be wrong about the body's being dead) who is also Holmes' best friend (so not likely to be wrong about the body's being Holmes's) has pronounced him dead. Instead Watson finds signs of a struggle and infers Holmes' death -- thus leaving the evidence that Holmes is dead to rest not on Watson's considerable skills as a physician but on his less impressive skills as a detective. ACD was clearly leaving a wide open door for Holmes' return.

If he really wanted to kill off Holmes, he would have had Watson find the body.

I can't decide whether I agree with you or with Philip on this one. I remember I really liked Moriarty in this one -- perhaps, to be honest, as much for the "getting into Holmes' pants" angle as anything else -- and I kind of didn't in "Falls," but I'm not sure why there was a such a difference in my reactions. Maybe it's overexposure, in the latter case.

Where I do agree with you is that I don't find a villain who is simply a bored sadist terribly interesting as a concept. Such people exist, and are chilling, but in fiction they seem convenient rather than meaningful. A lot of evil in the world is done for reasons, and even if those reasons do have a touch of at least lowercase craaaaazzzzyyy, they would seem to be the ones that lead to conversation rather than forming an end to it.

That's why, though I agree that making Sherlock a "case of the week" show would be fairly unambitious at this point, I'm not sure making it "pure order vs. pure chaos" is all that much more so. Fortunately, the journey is well worth any destination so far.

I've got to agree with you; I loathe, loathe, LOATHE the Sherlock Moriarty. Incredibly, the steampunk Hollywood Robert Downey, Jr. Holmes films feature what I think is a much better Moriarty, even if the quality of the films themselves are arguable.

Briefly touching a body before being dragged away is not forensically adequate.

Add me to the list of people who can't stand this Moriarty. The indication he's back in season four was the final straw for me and this show.

...television has LIED to me! Again!

Whereas I like "this" Moriarty, but only because I suspect that Moffat & Gatiss had already had the idea that Milverton would be the equivalent nemesis figure for Mycroft (in terms of character), even if they didn't know how exactly they were going to work it out. So Sherlock's Moriarty has to be the one obsessed by the psychotic performance rather than the cold, calculating, remote figure of the books because otherwise they end up with two rather similar figures - and (for my money at least) Milverton was far more sinister in his intent and operations than Moriarty ever was.

Add me to the sidelist that found the RDJ films Moriarty to be fantastic - Jared Harris turns in an awesome performance, keeping Moriarty as a credible university professor while being an absolutely nasty piece of work underneath. It's not a great Sherlock Holmes film (I'm a big fan of the first), but I think it's a great Moriarty film - I can see a case for arguing that the faults are due to Moriarty taking control of the narrative... a Holmes film set on such a global scale so often far from London seems wrong, but it's a fine playground for the Napolean of Crime.

Huh. Twenty years on, and I *still* can't read the phrase "Napoleon of Crime" without thinking of the Snarkout Boys.

I have only seen through the second-season premiere, but so far I agree with Alan's assessment of Moriarty. In a thug-type villain, emotional instability and volatility makes the villain less predictable and more menacing. But Moriarty has been depicted up to this point as a meticulous planner, and his mood swings and mercurial changeability undermine that, making him less menacing. (And also more annoying.)

I'm just generally sick of "mad" villains. They're cliché, and an ableist cliché at that. It's not as bad as putting your villain in yellowface and having them randomly swap their Rs and Ls, but it's in that broad category of depictions.

Has anyone done a version of Sherlock Holmes where Moriarty is just a front for Irene Adler? Or did I dream that?

Has anyone done a version of Sherlock Holmes where Moriarty is just a front for Irene Adler? Or did I dream that?

Elementary. Although it would be more accurate to say Irene Adler is just a front for Moriarty.

Hrm. Is it any good?

I had misgivings at first, but it worked. The one person who gets under Sherlock's skin enough to throw him off his game is also his only peer (as he sees it, at least). It helps that Natalie Dormer is hugely charismatic. The episodes she's in are also better-than-average for Lucy Liu's Watson, too. It raises everyone's game.

And a transgender actress plays the series' Ms. Hudson, which is really wonderful. :-)

And a transgender actress plays the series' Ms. Hudson, which is really wonderful. :-)

Yes, although she's been rather underused. While we're here, a nod for Sean Pertwee's Lestrade who I think is great fun, and who I hope will do more semi-comical roles in future!

I do love the portrayal of the Moriarty here. If Sherlock is exploring Holmes's psyche and not his solving of cases, then I really enjoy watching the contrast between seeing Holmes who seems to be emotionally controlled and with his self boiling under the surface, and Moriarty who is boiling on the surface and seems to have inner layers of control. I like that opposition.

I enjoyed Moriarty in this. And in "The Reichenbach Fall". But I was glad to see him go. He's less a character with his own story and more a force of narrative, nemesis and cause of the hero's own personal growth. A Manic Pixie Dream Villain. With an emphasis on the "Manic" obviously.

So all in all I was disappointed to see him reappear at the end of "His Last Vow" because 1. Have the writers really run out of interesting ideas for antagonists so quickly? 2. Are they able to make Moriarty an interesting character in his own right rather than just in terms of what he means for the hero?