Outside the Government: The Middle Men 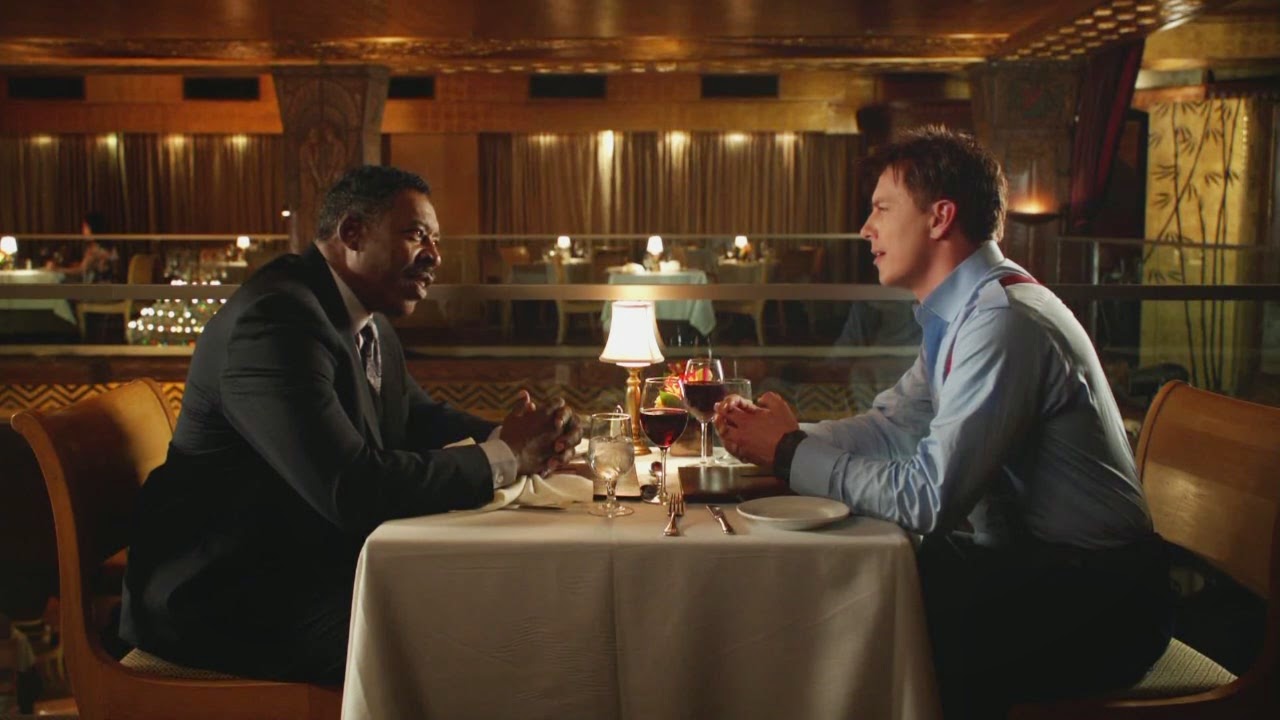 It’s August 12th, 2011. “Party Rock Anthem” will never die. Never. In news, in the UK at least, it’s all riots, as protests over the death of Mark Duggan expand into riots in Tottenham, which in turn spark riots across the country. Cameron’s government responds with a strong law and order platform that includes such reasonable things as a six month prison sentence for stealing a case of bottled water. In the US, meanwhile, it’s mostly just reeling from the aftermath of the latest debt ceiling showdown.
While on television. More perhaps than any other episode of Miracle Day, “The Middle Men” is a sequel to the previous. We’ve talked already about how Miracle Day is in many ways an expanded version of Children of Earth’s structure, with each pair of episodes serving as a distinct phase of the operation. But with “The Categories of Life” building to the cliffhanger it does, “The Middle Men” ends up having very little to do except to resolve its plot lines. And so we get the final disposal of Colin Maloney and the Cowbridge camp.
What’s odd, then, is how much of this episode feels at a slight disjoint to the previous one. Certainly they have dramatically different themes. “The Categories of Life” is straightforwardly an attack on particular political trends that builds towards a shock death. “The Middle Men,” on the other hand, is making a more philosophical point. The phrase “middle man” appears twice, once in reference to Colin, and the other time as a self-description of Ernie Hudson’s character. The thematic implications are in classic Miracle Day fashion, crashingly unsubtle.
Although the particulars of how this is put together are, to say the least, elusive. Ernie Hudson’s character appears to be intended as a suggestion that the evil is not, in fact, individual actors but a fundamentally corrupt system. And yet Colin is equally clearly held up as an individual evil. And the larger message of the story, hammered home in Gwen’s monologue before blowing up Cowbridge, in Ralph’s intervention to save Esther and Rex, and, in one of the story’s few moments of grace and subtlety, in the nameless camp worker who silently aids Gwen’s escape, is the power of individual actions and defiance in fighting institutional corruption. And in many ways this is a strong point of the episode. It is, after all, a sensible transition - “The Categories of Life” is about institutional horror, and “The Middle Men” offers a meaningful response to it.
Which ought to render Ernie Hudson’s character a more substantive villain than he is. His entire speech about a vast and faceless system, after all, cuts against the moral message of the story. Everything else is declaring that, actually, the system isn’t what matters, the willingness of individuals to take a stand or to remain violently complicit with the system is. And yet he’s not really challenged - instead he’s given a fairly significant voice within the narrative, serving as the major bit of exposition for the story, even if that exposition amounts to little more than a contextless word that could mean anything. Given that his only two jobs are to say “the Blessing” and to give a speech about middle men, it’s difficult to get him to make sense in the larger context of the episode. Which in turn ties in to the strangest thing about this middle section of Miracle Day, which is that Captain Jack is essentially sidelined in both episodes, left to chase the for-the-moment pointless Oswald plot in “The Categories of Life,” and relegated to a disconnected subplot with a total of three scenes in “The Middle Men.” Although this, at least, can meaningfully be called setup for the next episode.
For all of this, though, “The Middle Men” is fairly competent and effective. Colin’s mental collapse, particularly in his scene with Rex as he looks around for something to use to attack him, is delicious. Gwen’s scene blowing up Cowbridge is triumphant and gratuitous in all the right ways. Even Rex and Esther get some good bits, and the decision to keep Esther completely horrified by the realities of violence and killing people is a sound one that adds nice details to the character. Plus, no Oswald. It pales in comparison with Children of Earth, sure, but if we’re making that the standard Torchwood has to rise to then everything that isn’t Children of Earth fails pretty miserably. The fairer standard is the one it sets up for itself. Miracle Day isn’t a bad show. It’s not a good show. It’s a middle show. In every sense of the word.
Share on Twitter Share on Facebook

I like that Miracle Day is about how Obama sets up death panels after gay relationships ruin the world.

That's knowing your audience, right there.

"Which ought to render Ernie Hudson’s character a more substantive villain than he is. His entire speech about a vast and faceless system, after all, cuts against the moral message of the story. Everything else is declaring that, actually, the system isn’t what matters, the willingness of individuals to take a stand or to remain violently complicit with the system is."

Looking, again, at my LJ (and I think it says volumes for MD as "a middle show" that it's the only Doctor Who related programme where I need to remind myself what I thought), I seem to have thought that was the point: Stuart was a guy who was part of a faceless system and then decided to make a stand. He was investigating this before Jack did his hilariously unnecessary fake kidnapping and has decided he doesn't want to be part of it. It did bug me that Jack never confronted him about the camps, though.

Really my memory of some of these episodes as a whole is a bit foggy, maybe because of the above. I do have little standout moments that I recall though. Even though I enjoyed the interaction between Jack and the Middle Man, overall the scene felt odd as it had been given such prominence in the episode but then also felt so disconnected (as the other plot elements did) from what was going on and felt like it went nowhere.

The reason is that whether you're applying in your junior year or 25 years after graduating college from college, medical school admissions committees always assess your performance starting with your freshman year. Ultius.com promo code is most popular one writing service provider and my all of the teacher suggest me this writing service.

Guys! From now you don't have to read boring books and find an information to write essay - everything you need to do - it is just order an essay here
http://royalessays.co.uk/buy_essay.

Thanks for the article and nice photo! write essay uk - here you can order an esay for the university!

Thank you so much for a great article. This best essay writing service will help you to order a best essay.

Hi! Amazing article. Thanks you for good written text. If you need some help with writing your papers, check this custom essays service ;)

It is a pleasure to read such interesting and useful articles. essay helper online

https://fast-paper-editing.com/dissertation/
Great thanks, the piece of writing is unquestionably worthwhile! It is clear that the person is a proficient in the area. Alternatively to a great deal of writing pieces I have ever looked over on the topic, this one presents progressive points of view. This site recurrently offers a world of conclusive investigations on the hottest concerns. My family and I read them on a on-going basis.

Nice stuff.Thanks for sharing it.

It's great that you are getting thoughts from this oferta zapatos zoom strcture 19 baratas as well as from our discussion made at this place.

If you are looking for finest deals of lender on bad credit short term loans uk, Loan Tube is here to help you. It provides solutions anytime when you want on these loans to avoid financial crisis.

I seem to have thought that was the point: Stuart was a guy who was part of a faceless system and then decided to make a stand

Kroger is witnessed as the American retailing company by the Founder, Bernerd Kroger in 1883, in Cincinnati, Ohio

talktowendys survey is an online survey from Wendy’s. Wendy’s want easy access to the customer’s suggestions, opinions, and feedback.

Well surprising post. I am wonderfully shocking that I had a standard and through read on this point. Appreciative for giving this staggering information to us. https://researchproposals.co.uk/

We all need help from time to time. As for me, it’s worth trying https://buycollegeessays.online/. Placing orders wasn’t hard as I had thought before.

Iwriteessays.com reliable? They made me a huge favor when they proofread my research paper in calculus. I am good at this subject, but the assignment has something from liberal subject, so I decided to pay for making everything perfect.

Here you will find hemp bombs review reddit, and it seems to be very interesting because reddit has many similar reviews to look through.

If you need more information, I recommend you this hemp bombs CBD review. It will help to understand better the possible advantages of using them.

Glad to see this kind of brilliant informative post, and this is the post I have seen today. Corel Coupon