Outside the Government: The Nightmare Man 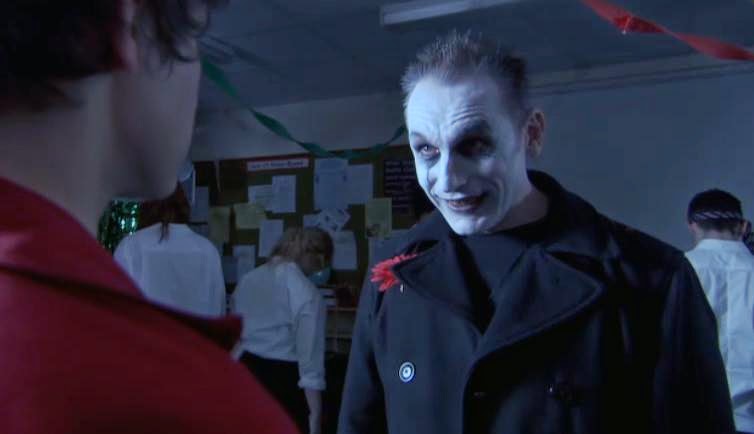 Sorry to be a pedant - but is Luke going away to college or university? You say college, but that doesn't really make sense. In the UK, college and university are vastly different things and it is very rare that anyone goes away for college - the US equivalent, sort of, of grades 11 & 12. College, as Americans seem to call it, is university in the UK, which (at least in years past, before rising tuitions and shrinking grants), students were expected to go away for.

Joseph Lidster wrote more for Wizards vs Aliens - given the very tenuous links to Who (although it's arguable that WvA is a vague spin-off of SJA, in a production crew sort of sense), I'm guessing you're not going to cover WvA?

Let's see: I know some people who went to Deeside College as a sixth-form college (aged 16-18). The same location was also a vocation school for over 16's, adults included.

I went to Lancaster University, which is a degree-issuing University (three years for an Honours degree in the UK one extra years for a Master's, thankyouverymuch). That's the equivalent of 'college' in the US.

To complicate things, Lancaster, like Oxford, Cambridge and Durham, is a 'collegiate' university, i.e. split into colleges/houses. I went to Furness College in Lancaster University.

In later years, my wife went to The Welsh College of Horticulture, which is a sixth-form college, a vocational school and an undergraduate college, but cannot issue its own qualifications. The University of Aberystwyth provides the degrees.

So.... what kind of college was Luke going to?

That was easy! Next question?

The BBC had originally approached Russell T Davies and asked him to make a character gay in the show. Davies planned for this character to be Luke, and intended to begin foreshadowing it from The Nightmare Man. However, Davies chose to cut one line which hinted more explicitly at this more development. The line which is cut is from the scene in which Luke saying goodbye to Sarah Jane as he departs for university.

Sarah Jane: Have a lovely time at university. You’ll grow up, you’ll find a girlfriend.
Luke: (off-handedly) Oh, could be a boyfriend!
Sarah Jane: Well, as long as it’s not a Slitheen, I don’t care!

—Cut lines from "The Nightmare Man," as remembered by writer Russell T Davies.

That off-hand remark never felt right to me anyway; comes out of the blue and feels 'random' or shoe-horned in, even if the plan was to develop it. But at the same time, it's nice to know they were after a gay character in what was essentially a kids' show.

Plus, why shouldn't he date a Slitheen? If he were a nice Slitheen, that is. Why couldn't Luke be a chubby chaser?

Adorable Gay Luke (tm) is another thing I'm sad we never got to see with the untimely end of the Sarah Jane Adventures.

I so want you to be the 'real' Alan Moore casually outing yourself as a middle class postgrad.

Can we just mention Clyde and Rani's nightmares here? Rani feels torn between her journalistic ambitions and her secret life hunting aliens--a thread that is also used in the SJA audio "Judgment Day."
Clyde's scenario is fascinating. He's trapped in a dead-end job, compared to Luke, and Sarah Jane is there. She's old, losing her memory--a call back to Mad Old Woman in the Attic, and foreshadowing of Goodbye, Sarah Jane Smith

It seems like it should be at least a pop between realities.

Well, I can honestly say I wasn't ready to see this thumbnail when I clicked on the blog bookmark this morning. Especially after several hours of Stalker: Call of Pripyat. The obvious visual link with any villainous clown must be either the Joker at one end or Pennywise at the other, and I'm definitely seeing more of the former (in fact, with the Kubrick stare he's giving, I'd specifically say Ledger's Joker), but my first thought upon seeing it was of the mystery man played by Robert Blake in Lost Highway. Again, maybe I'm just in a frame of mind to get spooked today, I dunno.

Except that between these courses, Inverness College has become part of the University of the Highlands.

a second generation of Bannerman Road residents, for instance, could reinvigorate the show for a year or two

...although it shouldn't be as blatant as, for example, an episode that revolves around "Look! It's Girl Luke, only younger!" That would probably be a mistake.

@Anton B
I am nowhere near old or hairy enough to be the real Alan Moore. Also, I dropped out after 2 years and never got a degree. Sorry.

My first thought at that picture was 'I'm in your house. Call me'.

OK, the next question is, which college? For some people it really matters.

I'd be very surprised if it doesn't get an entry.

Is there any boy in the world who has ever outed himself to his mother that casually? Even the coolest mom in the world?

So he's not going to college, but he is going to a college.

Is there any way to see this in the US?

"Hi, I've come to apply for the doctor's job. I can assure you my credentials are top-notch, I've just graduated from Harvard College Yale. I aced every semester, and I got an 'A'." -- Dr. Liz Asher during her "job interview" at Darkplace Hospital.

I didn't know anyone was /that/ specific. He's going to Oxford University; that's blanket statement all we need to know.

" They all went to Oxbridge University, wherever that is, and go poncing round in their great big suits going 'Ooh look at me I work for BBC2 do you like my glasses they're like John Lennon's' "

To be fair certain membes of the UK public do still use the term "college" when they mean "university". I've often heard people saying "oh, he's off to college in September!" when the person is plainly going to Uni.

The long established Luke/Clyde shippers would have been pleased at this.

He looks like a direct callback to the (known or likely) inspiration for several of the above characters, Conrad Veidt in "The Man Who Laughs."

I do love this episode and do find the performance by Bleach quite brilliant - agree with the resonances of Lynch above.