Outside the Government: Torchwood: Children of Earth: Day Four 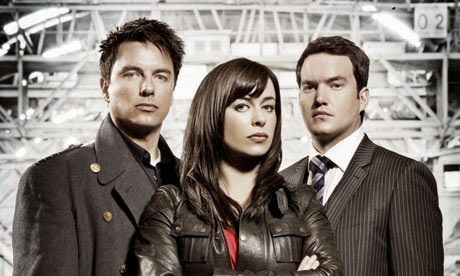 "In fact, his end solution is functionally no different from his actions in 1965: sacrifice a small number of children to save more people."

Which is fundamentally the solution the UK Government comes up with. The only difference being that they use different criteria to choose the children and unlike Jack refuse to offer their own relatives.

Which makes one question exactly how evil the Government were in this. Yes their methods were questionable, and they didn't agonise about it as much, but if everyone had refused to comply with the 456 now and in 1965, there probably would be no human race left.

Jack is seen as the hero who made the decision we couldn't bring ourselves to, but then fundamentally it would be no different to him offering Steven up as one of the 10% this time round.

The difference is that Jack actually had a solution that (hopefully) would see the 456 go away for ever. Whereas the Governments of the world didn't have that way out and could only give in to the ransom.

In hindsight the public ruination of the PM's career is a bit unfair, since without Jack's final solution what he and his Cabinet were doing was ensuring the human race stayed alive.

The idea that the 456 were given intense pain rather than destroyed grated with me at the time, and still does. What clues we were given to the 456's character (petty, selfish, materialistic) didn't leave me with the feeling that they would simply nobly depart the Earth licking their wounds and saluting a worthy foe. Far more likely that they would wait till we were looking the other way, then nuke the planet out of spite.

The ultimate solution is very like that of Quatermass, the last of the Quatermass serials.

The public ruination of the PM's career isn't meant to be fair; his successor is just as culpable.
The culpability of the politicians isn't so much a matter of the decisions they make as of how they make them. There are two questions here - one is a rejection of consequentialism as such, and then there are two further moral errors that even a consequentialist should reject. A consequentialist believes that in any situation there is a best option or at least a least worst option. And ultimately consequentialism is unable to acknowledge that there's a difference between a best option and a least worst option. So taking that option is always the most moral thing to do. In other words, you need feel no more guilt for sending half a million children to their effective deaths than for buying your mother an ideal birthday present. (At least some) non-consequentialists might acknowledge that sending the children to their deaths is the least worst thing to do, but thinks you should still incur guilt. For example, if you have to make such a decision you should resign afterwards. (Or leave the planet.)
The two further moral errors are, showing more concern for the opinion polls than for the lives of the children killed - to the point of ordering Frobisher's children killed. (Not that Frobisher's children are any more deserving to be spared than anyone else; but that their deaths are superfluous.) And then assuming that school league tables are indicators of the worth of the children attending them.

Mind you, if Davies were writing under the present government he might well present the politicians as thinking they could be quite open about their decision.

In hindsight the public ruination of the PM's career is a bit unfair, since without Jack's final solution what he and his Cabinet were doing was ensuring the human race stayed alive.

That's politics for you. No PM could expect to stay in office after such a calamity, regardless of the rights and wrongs of the issue.

I can guess where this is headed, but Gwen's pregnancy seems like a major complication to claims that the whole series is mirroring Jack's personal rejection of reproductive futurity. If Jack kills his grandson to save Gwen's child, that's a very distinct action from simply separating himself from reproductive futurity. Especially as his daughter could still reproduce (not that she will) and Jack himself can still reproduce (and will, if that piece of gossip about the Face of Boe's pregnancy was accurate).

I also think the focus on rejecting reproductive futurity weakens the associations between gay marginalization (especially during the AIDS crisis) and genuine class warfare. Not the rich's "class warfare means war on us" version, but actual and genuine neglect and disenfranchisement of the poor. Jack's rejection of one kind of family also constitutes an embrace of another kind of family, and it's that family he cannot face and flees from afterwards.

Jack's an oddly played character in Torchwood, especially in comparison to his far more "kid-friendly" Doctor Who incarnation. I wonder how Barrowman likes playing him in TW? He often goes on about how much he loves playing Captain Jack, and the positive feedback he gets from children, but although the Torchwood version is meant to be the same loveable rogue with a wisecrack for every occasion, the way he has to play him (and obviously the storylines he has to play within) go heavily against this grain. He can't walk around joshing and flirting the way he does in Doctor Who because it would be out of kilter with the plots and the way the other characters are behaving. When the Doctor accuses Jack of not taking things seriously, it's funny (especially when it's the po-faced Tenth). But when Gwen does the same it's because people are likely to end up dead.

Yeah, there's definitely a sense in which both John Barrowman as an actor, and the character of Jack Harkness as introduced on Doctor Who, are totally unsuited to Torchwood and to the role that Jack is slotted into there.

Two points. (1) The possibility of Llanto's death being a metaphor for the AIDS crisis was lost on me because (a) Llanto steadfastly insisted that he wasn't a homosexual, just as "Jacksexual," and (b) I honestly missed the plot exposition saying that it was a virus and just assumed it was poison gas.

(2) In many ways, I see Jack almost as the antithesis of the Doctor. The latter is immortal by virtue of his ability to endlessly reinvent himself via regeneration, a characteristic which has allowed the show to survive for 50 years. Jack, OTOH, was defined in the very first TW episode as being immortal and unchanging (Face of Boe silliness notwithstanding). Thus, from its beginnings, TW had a fixed endpoint -- the point at which John Barrowman either decided to leave the show or else had aged to the point where his "immortality" was no longer plausible. Torchwood was always vulnerable to the caprices of its main character in a way that DW wasn't.

The 456 refers to it as a virus. It must not be a contagious one though, as it would unlikely that Gwen would be allowed to interact with her friends corpses as she does in the last scene without wearing some sort of hazmat gear.

I marathoned Torchword Series 1 and Series 2 the resulting time-lapse was INCREDIBLY revealing.
Torchwood worked when it had stories it wanted to tell with the Torchwood setting and cast. Torchwood did not work when it had to take the Torrchwood setting and cast and tell a story with them. As a 'starting point' for the creative process Torchwood is a shallow swamp. The writer had to bring ideas to that swamp and build them there because the swamp wasn't going to produce any good ideas on its own.
It's not just that the characters were all miserable people imprisoned by this job and cut off from ever having a life outside of it because it -- or the time-traveling space hedonist who was absolutely devastated by the massacre of the Torchwood Three on the day the Seventh Doctor died (but never mentioned any of them by name ever again) -- it's the damn PTERODACTYL! The great big screeching SYMBOL of the awesome weirdness of everything that Torchwood was supposed to embody!
But that's not what Torchwood -- the version we actually saw onscreen -- did with animals like that. They put them down. The pteradactyl isn't a refugee from another time, it's from an alternate version of "Torchwood" where the world was 'weird and wonderful' and the team would do something like keep a pterodactyl as a pet! That was the Torchwood we dreamed of; the one we were promised in the premiere. But our Torchwood is set in a world that is 'weird and awful' instead. A series of 4 worlds; the crapsack Forever Pit that was the-series-as-it-aired, the boisterous-and-wonderful pterodactyl of the-series-we-were-promised, an immortal swatshbuckling space-time roguish conman of the series which spawned it (now a morose, fake-smiling self-loathing servant of the status-quo) and Gwen's World. Phil talks about Donna Noble as a character that (outside of her voyages with the Doctor) represents the anxiety of a middle-class family seeing their child fall down into the working class. Gwen is a working-class character trying not to fall down into the Forever Pit -- the yawning emotional black hole which most people don't know exists but which has engulfed Torchwood 3 and all of the characters inside it. When Coronation Street soap opera intrudes into Doctor Who it's about clashing narrative rules. But when it intrudes on Torchwood it's about anxiety. Gwen steps between the narratives and tries to keep Reece and the baby inside their own -- because she knows that the Torchwood narrative has Coronation Street surrounded. "Don't wander off the sets Reece. It's not safe out there."
Torchwood 3... ah ha! AH HA! I KNOW WHAT I'M TRYING TO SAY.
Torchwood 3, as a setting and cast, cannot undergo a narrative collapse because Torchwood 3 came pre-collapsed. The 'threat' to Torchwood as a series is the invasion of external narratives that try to build something on their swamp.

In a real sense, Miracle Day is an artifact of the original Torchwood; the one the pterodactyl came from. The weird and scary-but-still-wonderful world RTF wanted the series to be before it nosedived into despair. This was what Torchwood was //supposed// to look like... a world where the unexplained is a source of danger but the real 'point' of the story isn't the monster/planet-vagina, it's about how humans cope with (and fail to cope with) things they have no context for dealing with.

Tsh! You can't get AIDS just from touching someone!

Depends what part of them you touch...and which part of yourself does the touching.