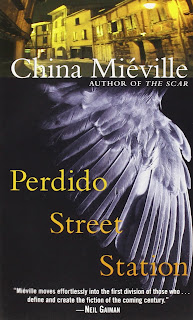 im going to say Railsea, because it's the only one of his books I've read that affected me emotionally. The others (City and the City, Kraken and Embassytown) were all good, but I felt like I was being held at arm's length from any emotional core. With Railsea, there was a part that was genuinely uplifting, and made me want to cheer.

The City & The City is his book least like what a Miéville pasticheur would write; it is I think his best.

Knowing what I know about Miéville, I know exactly when he's going to pop up in the Last War in Albion: the Black Dossier. Also yes, The City and The City is a great book, my Intro to Literary Studies teacher used it to explain the concept of psychogeography.

I shall be accused of being perverse but my favourite Mieville is either Un Lun Dun or Iron Council (the one everyone hates), and I consider The City & The City (the one everyone loves) to be his least impressive novel. It's basically a one-joke-book, and far too literal for my tastes. To pick up on a point Phil makes about PSS, TC&TC *demonstrates* its themes to you rather than exploring them the way Mieville's better books (IC, ULD, Embassytown) manage. Of course, Mieville's least impressive novel is still much better than most other novelists ever achieve...

Spoilers Below 5 years, 4 months ago

No love for The Scar? I think out of all of his, that one worked the most for me. Perhaps because Bellis Coldwine quickly grew from annoying to endearing, watching Tanner learn to read was one of the sweetest and saddest things I'd read in a long time, and the send up of seasteading is right up my alley?

I don't know if it's his best, but it's the one I like the most.

Have to second that. It has a playfulness about it, especially chapter sixty-four. Of his Bas-lag work I found Perdido Street Station to be the weakest, prefer The Scar.

The only problem I found with Iron Council was the slog that the Anamnesis: The Perpetual Train section was. I don't know if Mieville was triying to evoke the endless physically demanding effort of building a railway would have been relying on manual labour but it's the only time I almost gave up on one of his works. Having said that the 'light at the end of the tunnel' after it was pretty fantastic.

Bellis is my favourite Mieville protagonist, by a mile.

Thinking about why Perdido Street Station works for me:
Marxism is a total explanation of history that believes an apocalyptic resolution is imminent. Postmodernism can be characterised as a belief that total explanations of history are impossible as things stand and any apocalyptic resolution will be endlessly deferred. What genre aesthetic can contain both? A novel in which sprawling attempts to contain a totality of weirdness are continually defeated by additional weirdness, and in which a large number of potential plots are suddenly aborted by the apocalyptic onslaught of Lovecraftian lepidoptera.

Like you I tend to turn up my nose at worldbuilding, in that it works that spend a lot of time on it seem to be making excuses for being weird or outlandish when they should just own it and move on.

For this reason, while I've read and enjoyed both The City & the City and Railsea, I think the latter gets my vote. There's not much in the way of explanation or apology. It's "railroads are oceans, let's do Moby Dick."

I have never read a book of his that I didn't enjoy. However Embassytown* is my least favourite and I think The City and The City is his best but not his best in so far as exemplifying what a Mieville book is like.
Railsea? Yeah. Fun.

'Looking For Jake and Other Stories' features Mieville's best work by miles, in my opinion. 'Reports of Certain Events in London', 'Familiar', 'Different Skies' and 'Details' are stunning.

I've only read Perdido Street Station and Iron Council, but of the two the latter is by far my favourite, partially because of the tighter focus, but mainly because I can't forgive the former book for its utterly grotesque eleventh hour fridging.

Embassytown is the only Miéville book I've read, so although I enjoyed it (once I adjusted to the style, which took a little while) I can't do any comparisons. The comments have been interesting in that there seems very little agreement on his best and worst works - a healthy sign, I think!

I haven't read any of Mieville's work yet, which is why I voted for it in the last Patreon round, so I could discover a bit more about him through the eyes of Phil.

Even if some people were a bit ambivalent about this work I certainly want to read this and others, as I so far really am fascinated by and enjoy the sound and texture of his writing presented in the sections above. Thanks Phil!

I tried to finish Perdido Street Station and just couldn't. On the other hand, I loved Kraken, so maybe I just needed to find my favorite flavor of messy Mieville.

The Scar is the only one I've read, and I think I enjoyed it, although it's all a bit hazy now. I do remember having the Hunting of the Snark gag pointed out to me online somewhere.