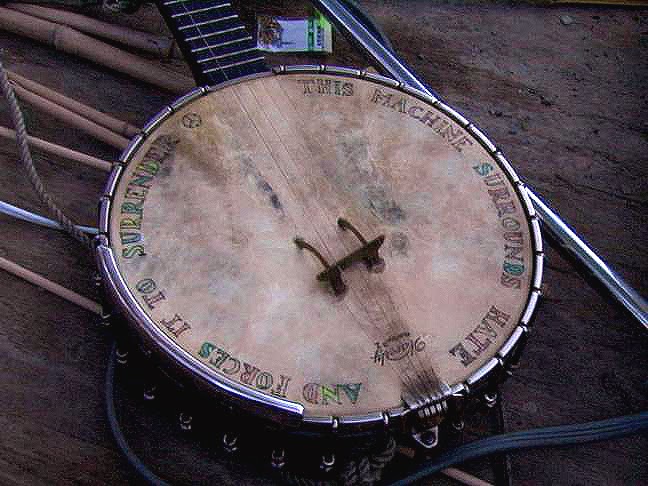 When I realized that my Wonder Woman book needed to be called something other than Paradise Dungeons, the title that sprang to mind first was A Golden Thread, which on the one hand refers sensibly to Wonder Woman’s lasso and to the sort of historical approach I take to her, tracing a single strand of feminist utopian culture through decades of history, and on the other refers to a Pete Seeger song, “Had I a Golden Thread,” about utopianism in general. I spent weeks seeing if I could come up with other good titles, but it was a mug’s game. The book was obviously called that, and I use two verses of it as an inscription before the first chapter.
I saw Pete Seeger play once, in 2000. He was 82, and already the elder statesman of folk music. He was playing a festival he basically ran, the Clearwater festival, which was an environmentalist benefit for the Hudson River valley. I wasn’t there for him. I mean, I’d heard of him - he was Pete Seeger, after all. He’d written “If I Had a Hammer” and “Little Boxes.” But I was eighteen and eighteen-year-olds don’t think “you know, Pete Seeger’s 82 years old and the number of occasions I’ll have to see him live are dwindling rapidly,” they think “oh, awesome, these two bands I love are at the same festival, and there’s some other cool stuff I’ve heard of too.”
Seeger didn’t play a full set - just a couple of appearances across the festival. He did a number on a Phil Ochs tribute panel (“Draft Dodger’s Rag,” of course), and a little half hour set where he sat under a tree and noodled around on his banjo being charming. I remember one song he did - a fairly standard bit of hippie protest folk - where, before the final verse, he paused and explained that he noted some children in the audience, and that this final verse actually contained a word that the children had probably been told not to say in the house. He then pointed out that they were not in the house, and plowed on cheerily, because Pete Seeger had the moral authority to overrule your parents and everyone knew it.
Later in the set, it started to rain just a bit. Only a few drops - nothing major. But a couple people had umbrellas and popped them open, at which point Seeger stopped playing and calmly explained that he would not be continuing until the people who were under the tree and thus still dry passed their umbrellas to the people not under the tree so that everybody could be dry.
It remains the only time I am aware of in which an artist has actually created, however momentarily, a socialist utopia.
Share on Twitter Share on Facebook

Irrelevant interruption: The Hartnell paperback from the Kickstarter campaign just arrived. While I continue to read through the epub and mobi versions from Smashwords, this is a handsome publication indeed. Good show. Should be proud etc etc. Cheers.

Pete Seeger was Malvina Reynolds in an alternate universe. So what Phil said was right ... from a certain point of view.

nah, Seeger never would have written a song as smug and condescending as "Little Boxes" in any universe

"Little Boxes" may be less smug and condescending in other universes.

Nyq Only 6 years, 5 months ago

Is ticky-tacky a viable building material in other universes?

Pete Seeger is fantastic. One of my most patriotic moments was at 7 AM the morning of Barack Obama's inauguration, waiting on the Mall, watching the recording of Pete Seeger from the night before singing This Land is Your Land. Woody Guthrie may have written it, but Pete Seeger could sing the heck out of that song.

I actually interviewed for an outdoor educator job on the Clearwater. It sounded really cool, but I wasn't that sad about not getting it because that boat is really tiny for the amount of time you spend on it.

Pete Seeger had quite a remarkable late career, remarkable because he too all intent and purposes blew it by trying to get Bob Dylan unplugged at the 1965 Newport Festival. In essence he tried to switch off rock the day it was born.

But of course Dylan worshipped Seeger and wouldn't have been up there if it wasn't for him.

According to Billy Bragg, Seeger had nothing against electric, and applauded an electric set by Muddy Waters at the same festival. He wanted Dylan to unplug because feedback from the amps meant the audience couldn't make out the lyrics. And if you can't hear what a protest song is saying, what's the point?

With our Education Secretary's ill-informed blathering about the First World War, "What Did You Learn In School?" is particularly poignant right now.