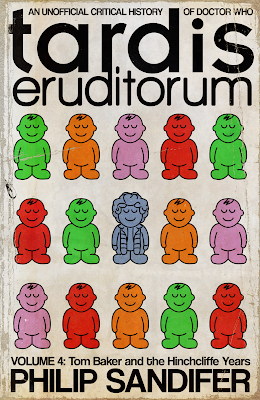 Planet of the Ood will be covered on Tuesday.
I am pleased and indeed thrilled to announce the release of TARDIS Eruditorum Volume 4: Tom Baker and the Hinchcliffe Years in print and digital release.
You can get it at the following locations.
Amazon.com ($13.99 print, $4.99 digital)
Amazon.co.uk (£8.99 print, £3.59 digital)
Smashwords ($4.99 digital, and available in non-Kindle formats)
Over the next couple of weeks it will appear in other ebook stores like Kobo, Barnes and Noble, and Apple, though if you have e-readers of that sort, I advise buying from Smashwords. Previous volumes, including the soon to be out of print first edition of the Hartnell book, are available from all of the same sites.
This book collects the TARDIS Eruditorum entries covering the first three of Tom Baker's seven years in Doctor Who, from Robot through The Talons of Weng-Chiang. And so it includes:
If you do enjoy James's phenomenal cover, mugs and t-shirts based on the design are for sale in the Eruditorum Press store.
On Saturday, I asked what people were thankful for. I'm thankful for a lot of things, but one of the things I'm most thankful for is the community of readers that has formed around this blog, and that are unflaggingly and stunningly generous in their support. Every time I do one of these book launches I usually have a big spiel about this, but I'll keep it short and sweet this time: writing is my job. If you enjoy my work, taking opportunities to support it by buying stuff is what keeps me able to do it.
I expect the second edition of the Hartnell book to be available in early January. The second Tom Baker book will probably be in late summer of 2014. The Logopolis book will be slightly before that.
Thank you everybody. This has been a heck of a month.
Share on Twitter Share on Facebook

I'm thankful that I can take a break from reading Brand New articles because I now have four blog entries on book-cover design process to go through!

So, it is true! The evil one prints books with jelly babies! :-D

(To be fair, this cover might've worked better with the more "fun" Graham Williams era, but that's a minor quibble; it's a lovely cover.)

Bought it. At first glance I was like "THAT'S the cover?" That feeling lasted about five seconds, and then I fell in love with it. I'm WAY behind on reading these but the extras sound fantastic.

Reacting to a tangent in the TARDIS translation essay:
If the TARDIS is translating based on intention of the speaker it is presumably translating based on the Gricean intention. That is, the intention of the speaker to produce an effect upon the listener by means of the listener recognising that intention itself. I think that takes care of lying, and I think also irony and sarcasm. (The speaker's intention is that the listener recognises the intention to use irony.) To think that it wouldn't translate sarcasm seems to me to depend on a rather simple model of language in which the purpose of language is to communicate propositions; and on which figurative language only dresses up or decorates (or wilfully obscures) the propositions.
Actually, I'm largely an anti-intentionalist when it comes to language. Intention is a concept whose purpose is to gesture at what wasn't done or wasn't succeeded at. And I think it's important to any theory of language that it makes it possible to say things that wouldn't otherwise be available - and therefore cannot be reduced to anything such as intention that is extra-linguistic. But it's worth getting the ideas clear.

When the Doctor says "allons-y," why doesn't the TARDIS translate it into English?

Because it's meant to be a comment in a language foreign to the listener, but which that very listener might actually be familiar with.

Your TV is not 100% compatible with the TARDIS telepathic circuits

I actually got this Saturday morning; read the new material and am now reading through the whole book.

Quick question: I thought any Kickstarter- sponsored essays from the Pertwee era would have gone into this book as appendixes. Were there none, or did you just merge them into the book itself? (The Master Restitution essay seems like a possible candidate for this.)

The Master Restitution essay was indeed originally commissioned as a Pertwee essay.

Darn, will have to wait to buy this, probably until January. Our spare money is currently going towards a new front door since our current one has become, functionally, a rather draughty section of wall with a letterbox.

Love the cover, though!

I just want to pop in here and say how much I love all these books. Having all the entries bound together like this really brings home the fact that they tell the story of Doctor Who, and you make sure it's an engaging and insightful ride.

I cannot wait for the day that I have enough money to buy all the hardcopy versions of these and can arrange them proudly on my bookshelf.

I love these books, so much.
I'm currently in the middle of a marathon watch of 1 episode per day of the classic series, which I started on Jan 1st this year and plan on finishing sometime around December 2014 before deciding if I'll continue into the new series. Currently at The Green Death episode 4, if you are interested!

Anyway, what I wanted to say was that I have been reading your books alongside each serial, and Volume 4 comes out just in time for me to keep this up into Tom Baker's early years. So I've just bought it!
A great read, thank you.

What Happened To Robbie? 7 years, 1 month ago

I've been getting so excited about your book launches that i've started having dreams about them - in one my copy of Hartnell version 2 arrived in a fridge and you'd kindly left some bread and beer in there for me too. I think it was because I'd just read about this http://thewire.co.uk/news/21538/the-residents-release_100_000-ultimate-box-set