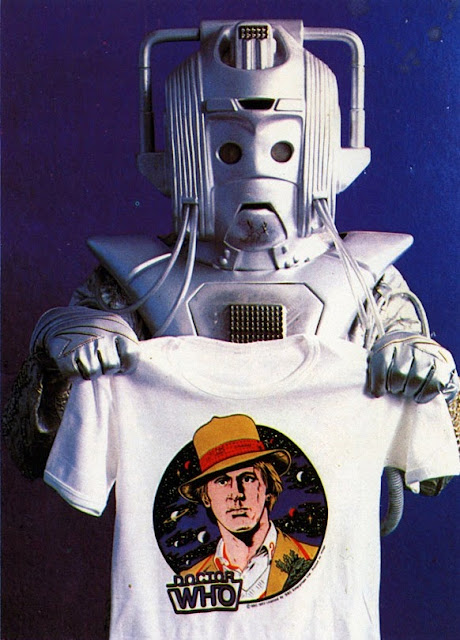 "Can you upgrade this to a larger size?"

"My impression of Peter Davison."

"Oh, eeeeexcellent. It's the wrong size."
-- Billy, the sarcastic Cyberman

BBC's "Behind the Monster"

"Cyberman fell on hard times after the 80's. A decade of living high on the Saward horse had left him broke, and with an addiction to feed. This picture, taken in 1992 shows this once mediocre menace, reduced to pawning his memorabilia of better days, just for one more upgrade."

Ah yes, back cover images of DWM circa 1983. Mick Austin artwork in the comic strip. Photos of Councillor Hedin. Adverts for ET sweets. Beat the Panoptropic Net. Chorley Award of the Month. Archive features with strange red blobs on some of the photos. The TARDIS Log. Jumpers for goalposts...

In other news, they torment us again: http://www.mirror.co.uk/tv/tv-news/106-doctor-who-episodes-uncovered-2343474

Not believing anything until the BBC confirms.

And by a BBC confirmation I don't mean Radio 4 reporting the rumour. Sorry, Ian Levine.

Right now I'm assuming that there are no missing episodes about to turn up. Would love to be proven wrong but it's just too much of a tease to invest any realistic hope in it.

My theory: George Lucas has diligently tracked down all the lost episodes, but is insisting that Jar Jar be digitally inserted in all of them before he will hand them over.

Compared to some posts, Phil, this one is positively flippant.

Just seems too good to be true.

I can't help thinking that the only way of retrieving lost episodes will be to invent wormhole travel, open one up just outside wherever the 1963 radio emissions shell has got to by then, send through a TV and video, and record them. I think that's more likely to happen than finding every missing episode in an Ethiopian archive, sadly.

Thing you have to remember is a standard off the shelf VHS recorder wouldn't cut it. Too many lines. You'd have to custom-build something to record 405 line transmission. Would be easier to open up your wormhole into the tape library a week or so after transmission and copy the original video recording. Either that or masquerade as a potential buyer of film copies from another country (although you'd probably miss out on "The Feast of Steven" there).

You see I've thought about this a little too much...

Jeesus H! First Radio 4 news, then the Radio Times. For a supposed hoax or unsubstantiated rumour this story seems to have been unofficially confirmed by everyone except the Pope and the BBC so far. And I've heard the Pope's about to make an announcement...

Even if episodes were found I cant see them releasing them for download so quickly. They would need to go through the restoration process first.

I wonder if there are any online odds markets that will let me short the possibility of the BBC actually announcing something on Tuesday?

Fool me once, etc. I'll be happy to be wrong, but refuse to hold my breath again.

Hmm. That ad showed up in some of the Marvel UK books with Alan Moore stories, if I recall correctly...

I think Tuesday you maybe shouldn't write anything, just give us an open thread for the inevitable comments once the Press Conference happens...

You do recall correctly. In this case I cropped it out of a scan of The Daredevils #6.

You know, I think I'll do that, actually - I'm behind on everything ever, and the thing I started for Tuesday had events shift out from under it such that everything I wrote needs to be scrapped and started over.

I had figured someone would go with "I killed Adric and all I got was this lousy t-shirt."

It's gonna be an interesting Tuesday. Out of interest Phil what was the subject of your pulled post which had events shift under it?

Well remains to be seen if it is true - but so want it to be the case! Baited breath till then...

Something else to grease the rumour mill - I was at a small convention called 'Regenerations' a couple of weeks ago in Swansea. Anneke Wills who played Polly with Troughton was on panels there. She did a weird thing a couple of times in response to rumours/thoughts around lost episodes. In a Ben-like mockney accent she said "Power of the Daleks, I know nuffin - I ain't seen nuffin!" And all with a glint in her eyes... does she know something we don't?

In vaguely related news, I'm startled by how much Jon Pertwee looks like Tom Baker in this pic: http://i4.mirror.co.uk/incoming/article1796400.ece/ALTERNATES/s1227b/Jon-Pertwee-returns-as-Dr-Who-1796400.jpg

I find it hilarious that the man who inspired the Abzorbaloff just accused our good host of talking out of his arse. :)

Have to say I'm appalled with the behaviour of some fans in comments (no, I don't mean here!) now that the BBC has postponed the press conference & screening for a couple of days. In particular, Ian Levine's Tweets are dreadful.

Yes it's annoying, but language like that does nothing for the reputation of the average Doctor Who fan. It just makes us look like a bunch of childish foul-mouthed anoraks.

I'm dreading the possibility that there's a large haul that's going to take a year or two to get fully released. The years of nonstop bitching that will cause...

Then again, I'm as annoyed as anyone that Underwater Menace 2 is going to end up having taken over two years to surface on an official release. Beaten to release by piracy. To the tune of months. That's got to be a black eye for the BBC.

Sadly you can't blame them. The BBC has a lot more on it's plate than just Doctor Who these days, and unlike US TV networks (who are only answerable to their advertisers), the Beeb is constantly answerable to the British Government. Doctor Who may be a big thing to us, but it's still small potatoes to the Beeb.

For someone who's main information is coming from Twitter...where is this about the Web of Fear having been found?

And now the alleged press conference has been allegedly delayed, allegedly to Thursday. Unless it's Friday.

The Guardian's reputation is too valuable for them to screw around reprinting tabloid stories. If it were the Sun or the Mail I'd assume it was the Mirror. But the Guardian?

If they ran it, they have something good.

Maybe. But does the Guardian put their "A" team on their pop culture / entertainment stories? If they get this one wrong, it's not like I'm going to stop reading their Middle-East news desk.

That said, if this is a straight-up hoax then I do think it's more likely that the same hoaxer(s) was the primary source in multiple stories than that the papers were just echoing each other. Hopefully.

I imagine the Guardian has as high caliber entertainment writers as it's possible to hire. I doubt they'd go to press without someone from the BBC talking, albeit clearly off the record. And the writer of their article has covered the BBC pretty extensively.

It seems David Tennant is photobombing to the right of the second Dalek.

OK, I think this counts as official confirmation: http://www.bbc.co.uk/news/entertainment-arts-24448063

No hint there as to how many though.

Life would be so much easier for the poor BBC if there were only a few, but if there's a lot.... Ian Levine's tweeting that it's the solemn duty of every Doctor Who fan to download these episodes officially from ITunes or else there'll be no more. Much as I deplore his frequent descents into hysteria, I have to admit he's got a point. Sadly what will happen is that they will soon surface on torrent and newsgroups, unavoidably reducing any revenue the Beeb is hoping for.

We'll hear the old "but we've paid our licence fee so they should be free" mantra several times over the next few months too, neatly forgetting that the UK license fee only covers the initial making of the programme. it doesn't cover renegotiation of royalties for actors and writers, the fees paid to the Restoration Team for cleaning up the film, and the money the Beeb probably had to pay to get access to the films in the first place. Oh no, because my grandad paid for a TV licence in 1966 I should be allowed a free copy of "Power of the Daleks".

It saddens me further to think that fans wish and pray for times like this, but yet when this once in a lifetime event has come along (discovered episodes! Plural!) a significant number of them are whining, complaining and swearing online.

Here's hoping the public's response is good, and if it takes the Beeb a year or more to dribble these out, then so be it. I hope they make as much money out of it as they can.

Well hot damn. Delighted to be wrong. Now... let the wild speculation begin! The full 105 seems like obvious nonsense. (Then again, 24 hours ago I thought the whole thing was obvious nonsense.) But presumably they wouldn't go through this kind of song and dance if it were just another thimbleful a la the Galaxy Four recovery?

Ah, screw it: if we just get Power of the Daleks, dayeinu. Heck, if we just complete any of the first-season Troughton stories I'd be happy.

This won't be the most popular...but I really want the Massacre back.

A single-digit haul looks like the most probable now, (I see rumors of nine.) Still hoping for double digits, obviously, but not expecting. The triple-digit Shangri-La I'm not sure is even probable enough to be hoped for; it slides into the category of the merely wished-for. (Though feel free to prove me wrong, universe.)

Spacewarp
It saddens me further to think that fans wish and pray for times like this, but yet when this once in a lifetime event has come along (discovered episodes! Plural!) a significant number of them are whining, complaining and swearing online.

Well done Daily Mash! Hit it on the head there.

Yeah I've heard rumours of 9 recovered, but that some of those are Troughtons. So that's kind of sad news for all those Marco Polo fans, and it doesn't bode well for Power of the Daleks either. Would be nice to see some completed Troughtons (2nd Doctor fan here), but I think we should be be prepared for the likelihood of a few more odds and sods.

Doctor Who episode recovery does tend to go like this though:

1. Entire story missing. Has mythic status.
2. One episode recovered. Is pants. Fans conclude entire story is crap. Story's reputation rapidly declines.
3. Ten years later a second episode recovered. It is excellent. Entire story re-evaluated. Reputation starts to improve.
4. Repeat with varying success until...
5. Suddenly entire story is completed! And it turns out to be "Tomb of the Cybermen" all over again.
6. Everyone agrees that it's not the Classic of legend, never was, and we all knew that anyway.

Dear Santa...I would like The Daleks Master Plan and Marco Polo thankyou.