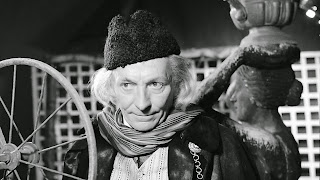 Sorry to those of you who are already annoyed about how much I'm delaying ending this thing. You can always stop reading and end it now - I won't mind. But I've always put on the brakes at the end of an era, slowing down and relishing the opportunity to make a definitive statement. The end of the blog, unsurprisingly, is going to be like that but even moreso. The last entry will go up February 9th. It's scheduled through, I know what I'm doing with it, we're doing the ending of TARDIS Eruditorum with deliberation and knowledge, and it's not going to be much more self-indulgent than the end of Sandman.

But first, we're going to go through these BBC America specials done, one a month in 2013, to lead up to the 50th Anniversary. Mostly because it's an opportunity to look at how Doctor Who itself gave an official self-history at the same moment as we wrap up our history of it. These will generally be short entries. But they're worth doing, as part of the end of the ritual.

These are basically clip shows with talking heads and ...

A Chrysalis Case After Its Spread Its Wings (The Tenth Planet)

It's October 8, 1966. Jim Reeves is posthumously at number one with Distant Drums. The Rolling Stones, The Supremes, The Who, Dusty Springfield, and The Troggs are all charting. Distant Drums will hold #1 for three weeks, before The Four Tops take it. In the news, we have our standard smattering of 60s misfortune with a side of a massive coal disaster that kills 144 people, mostly children, in the Welsh village of Aberfan, and the infamous escape of George Blake, a British spy and double agent for Russia, from prison in London.

But let's be honest, it's hard to approach this one from that direction. Which is a pity. There are stories fandom has done some mean things to over the years, but few we've been as brutal to as this one. Ask a reasonably dedicated fan, and there are two things to know about this story - it's the first regeneration story, and the first Cybermen story. And that basically defines it. The trouble is, it's neither.

It's certainly not the first regeneration story. Wood ...

These Books Are From Your Future (The Smugglers) 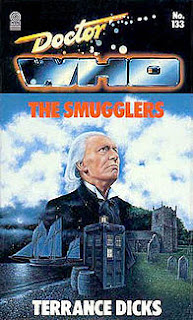 It's September 10, 1966. The Beatles are at number one again with the double-single of Yellow Submarine and Eleanor Rigby. Also in the top ten are the Troggs, the Beach Boys, and Napoleon XIV.  Over the course of the next four weeks we'll also see The Small Faces take #1 with "All or Nothing," Jim Reeves will take it with "Distant Drums," and Roy Orbison, The Seekers, Sonny and Cher, The Supremes, The Who, and Manfred Mann will also pop around the top 10. Not on the Top 10 but still enormously important, since we last saw Doctor Who, The Doors released their debut album. Also, the first episode of some American sci-fi show called Star Trek aired, which is surely just some cheap Doctor Who knockoff or something that we can safely ignore. And over in reality, while we were sleeping the Cultural Revolution began in China.

Meanwhile, Doctor Who has returned for its fourth season with The Smugglers, filmed, as with Galaxy 4 and Planet of Giants before it, at the end of the previous production block, and thus in many ways the last story of Season 3 more than it is the first story of ...

You Were Expecting Someone Else III (Daleks - Invasion Earth: 2150 AD)

You Were Expecting Someone Else is a recurring feature covering non-televised Doctor Who from classic eras, generally more or less in the period where they came out. Today we look at the 1966 film Daleks - Invasion Earth: 2150 AD, starring Peter Cushing as Doctor Who, Roberta Tovey as Susan Who, and Bernard Cribbins as Not-Ian-Chesterton.
It's August 5, 1966. The Troggs are at #1 with "With A Girl Like You," a nice, proper, crunchy record. The rest of the top ten, however, is mostly pretty unambitious pop, with The Kinks chillaxing at #9. Since we last saw Doctor Who, the news has been a standard mixture of war, mass murder, military coup, and the like. Beyond that, as mentioned last entry, England won the World Cup. Also, The House of Lords issued the Practice Statement a somewhat important milestone in political liberalism in the UK in that it freed the House of Lords up to be more progressive, and August 3rd, 1966 happened, which is interesting only if you're a Simon and Garfunkel fan. Also, Revolver came out. And, as it's the summer break in ... 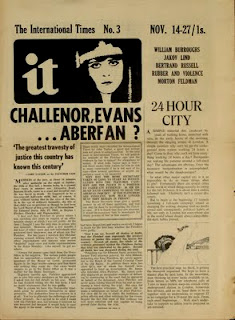 Pop Between Realities, Home in Time for Tea is a recurring feature in which things that are not Doctor Who are looked at in terms of their relation to Doctor Who. This time, we engage in the frankly insane task of looking at 1960s counterculture, extremist occultism, and the FIFA World Cup.
There is a 60s that we all know originated in San Francisco, and through the haze of marijuana we can still just about make out that there was some sort of revolution lurking underneath that tie-dye. Some aspects - sexual freedom, the de facto legalization of marijuana (which is, let's face it, not so much illegal to smoke as it is illegal to be caught smoking, with virtually no police forces in European or European-descended cultures actually bothering to seek out individual users), and certain hazy new age concepts have stuck around. But the hippie movement is, by and large, a dessicated corpse of a rebellion now seen as defined primarily through its failure - i.e. as a symbol of a failed revolution whose proponents are too naive to realize that they have long since failed.

It's June 25, 1966. The Beatles are at number one with "Paperback Writer," and will trade it to The Kinks in two week's time. The remainder of the charts display a fairly standard blend of irritating traditionalism and pleasant edginess as it proceeds towards a more contemporary style. In the news, not a lot happens - some shuffles of foreign leaders, France leaving NATO, and the Vietnam war gets worse and worse. Oh, and the 1966 World Cup started five days before the finale of this story. But it's not like that had any influence on British culture of the time.

Meanwhile, on television, the Doctor fights a renegade computer that's controlling people's minds out of Post Office Tower. So I guess the odds were fairly high after all, and we're going to have to talk more about Quatermass.

Much of the point of taking The Quatermass Excursion on Monday was to make sure it was clear just how bizarre this story is in the context. As much as Doctor Who has felt a bit all over the map since Verity Lambert left (but never with ...