Phil Sandifer and I have created another set of episode commentaries, this time for 'The Three Doctors'.  It's a fun set of tracks, largely because about half way through I abandon any attempt to be serious and just start giggling and pissing about. 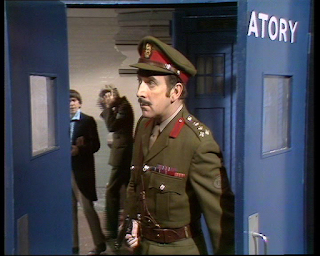 Strange, isn't it?  Years go by without you hearing my voice... and now I won't shut up!  But yes, there's some more audio for you to enjoy with your ears.  This time it's another Eruditorum/Shabgraff co-venture, with Phil Sandifer and I talking over the top of one of the greatest Doctor Who stories ever made.  Very much for people who think Doctor Who is best when you can't hear the dialogue... but can hear two bloggers talking about it.  Hmm.

I'm only kidding.  These commentaries are actually all brilliant.  Especially my bits.  (Phil's are quite good, but he does insist upon letting actual knowledge and erudition interfere with the flow of manic blithering... which is not a problem I have, let me tell you.)

This time you can download all the episodes at once, which is a better way of doing it (I think).  Just click here, my poor innocent trusting fools.

Yes, Shabcast 2 is here.  This month, you get the first part of my immensely long (and ongoing) discussion with the wonderful Josh Marsfelder, writer of the Star Trek blog that makes all other Star Trek blogs look like nothing more than Star Trek blogs, Vaka Rangi.

There will be more of the discussion up next month in Shabcast 3.

Meanwhile, Shabcast 1 - with me and Phil Sandifer - is still available here.

And, once again, thanks to the lovely lads at the Pex Lives Podcast for providing me with the bandwidth to make this project possible.  Pex Lives' latest edition is just out, and is about 'The Trial of a Time Lord', and is very funny and opinionated (I think they're a bit hard on Colin Baker to be honest, and far too kind to The Verve).  Download or listen here.