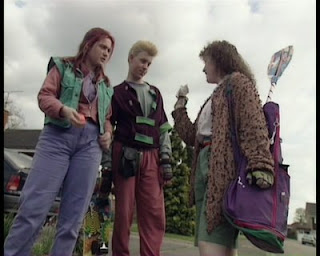 If you want to date your argument from Press Gang then the story of Doctor Who’s return begins a few months before its final season. But Steven Moffat didn’t bring Doctor Who back, and indeed has said in interviews that he could never have done what Russell T Davies did with the series without having seen Davies do it first. In that case, then, the return of Doctor Who begins about two years after its cancellation, in November of 1991, with the debut of Russell T Davies’s first created television series Dark Season.


Dark Season is a straightforward show - a bit of a nostalgic throwback. It features a trio of schoolchildren investigating sci-fi mysteries going on around their school. The plot is split into two three-episode runs, with the fifth episode cliffhanger suddenly revealing that the villain of the second story is in league with the villain of the first story. Our main character is Marcie, whose conceit is that she more or less recognizes that she’s in a sci-fi television show and so plays for the right set of conventions instead of bumbling about trying to figure out things that the audience had ages ago ... 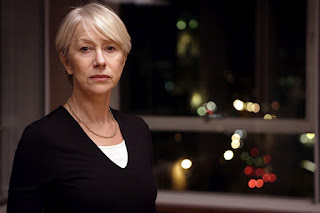 Prime Suspect, debuting in 1991, and Cracker, debuting in 1993, are two of the most iconic British television series of their eras. For the most part it is easier to list their similarities than their differences. Both are exceedingly dark detective series featuring psychologically and emotionally troubled police detectives. Both are award-winning and breakout roles for their lead actors (Helen Mirren and Robbie Coltrane respectively). And both are very, very good.

There are differences, to be sure. Prime Suspect goes for a structure of a single case per season (save one experiment in its fourth season with doing three cases over three episodes), while Cracker goes for a three-story arc over a longer season. Prime Suspect had more US success, getting aired on PBS and picking up Emmy awards, while Cracker got an unsatisfying US remake and less attention over here. (Prime Suspect eventually got its own mediocre American remake as well) More broadly, Prime Suspect is a straight-up police procedural, whereas Cracker focuses on a police psychologist and on that specific aspect of its cases. Prime Suspect thus has a bit more socially realist grit, where Cracker is a bit more over the top.

I kept meaning to do a post on various bits of British comedy over the last year. Really, I did. But, you know how it is. There was always something else to write about, and Doctor Who wasn’t really going for comedy much in the 1980s, and something else always seemed better. And so when I finally found a spot to do it, suddenly there was a lot to do. So we get something in the spirit of our hellish dogpile of late 70s/early 80s science fiction: six mini-entries on assorted British comedy of the 80s and early 90s. 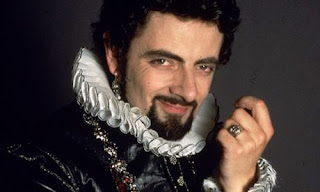 It’s brilliant, of course. But let’s look carefully at what’s brilliant about it. On the one hand it’s taking a bit of an easy route to brilliance: it’s a massive team-up of comedic talent. The sheer volume of talent involved in making Blackadder is outright staggering. Not, of course, that everything that combines a large number of talented people works. Blackadder, however, works wonders, combining a traditional comedic structure with some particularly bitter teeth. It’s notable, then, for being at an interesting cusp between two modes of comedy - an export-friendly traditional ...

Pop Between Realities, Home in Time For Tea 37 (Sandman) 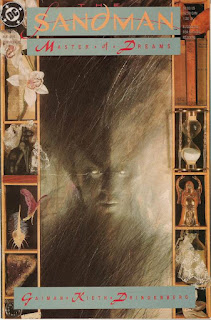 It is in some ways difficult to quite articulate why Neil Gaiman is good. Clearly he is. Even if I wasn’t fond of his writing, and I am, I’m not the sort of critic who is going to try to reject the volume of acclaim that Gaiman’s work has gathered. (Heck, I’ve contributed to it.) But despite all of this it’s maddeningly difficult to figure out what it is about him that makes him so substantial and important.

He is not so much the first of the British Invasion comics writers as he is the middle of them. The forefather, Alan Moore, had made the jump to DC some years before. His arrival coincided with Jamie Delano’s and Grant Morrison's, with a later wave still to come consisting of Peter Milligan, Garth Ennis, and, finally, Warren Ellis and Mark Millar whose British careers didn’t even start until after Gaiman had broken out in the US. In this regard he is, by and large, typical of the style. He’s probably the most successful of them, although Millar’s savvy in making creator-owned comics with the intention of having them turned into films ...

Pop Between Realities, Home in Time for Tea 36 (Snow Crash) 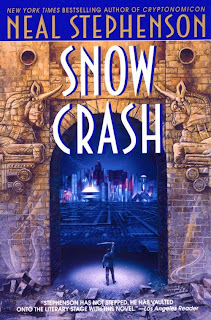 There are two main ways into cyberpunk, and which one you pick is terribly important to how the genre looks to you. The first option is to go via Neuromancer, William Gibson’s 1984 novel. This is not the first cyberpunk work - the term had been coined a year earlier by Bruce Bethke, and had been around unnamed for a few years previous, including in other works by William Gibson. But it is in many ways the definitive one, where it broke out into the mainstream. A year later we had Max Headroom, which we’ve already talked about.
The other way people approach the genre is Neal Stephenson’s 1992 novel Snow Crash. This is an altogether more interesting way, since Stephenson’s next novel, 1995’s The Diamond Age, was self-consciously framed as a post-Cyberpunk novel. The first character it introduces, Bud, is a blatant parody of cyberpunk heroes (the first sentence says it all: “The bells of St. Mark’s were ringing changes up on the mountain when Bud skated over to the mod parlor to upgrade his skull gun.”) and, more to the point, gets spectacularly and ignobly killed forty-three pages into the book. And while ...

Pop Between Realities, Home in Time For Tea 35 (Star Trek: The Next Generation) 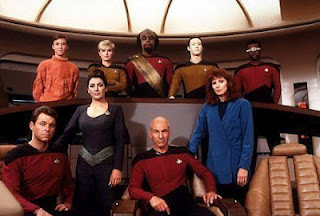 There are several angles from which to approach Star Trek: The Next Generation in terms of Doctor Who. Most of them entangle themselves in a sort of anxiety of influence, either picking over the ways in which Star Trek and Doctor Who’s histories are intertwined or stomping their feet adamantly over the ways in which they are fundamentally different. I think the more interesting relationship, staring from a post-2009 vantage point, is one based far more on material conditions of broadcast and production. But let’s deal with what everyone else is interested in first.

As I noted when last we talked about Star Trek, at the time they were both being made in the 1960s the extent of influence the two shows had on each other was “none whatsoever.” Short of elaborate theories, it’s just not possible to posit that anyone involved in one show had even heard of the other, little yet seen enough to be influenced.

Come the 1970s, though, when Star Trek was off the air, it began having considerable influence on Doctor Who. The obvious one is the roundel in the Season Fourteen control room, but the larger influences come in the Pertwee ...

Pop Between Realities, Home in Time for Tea 34 (Press Gang, Doctorin' the TARDIS) 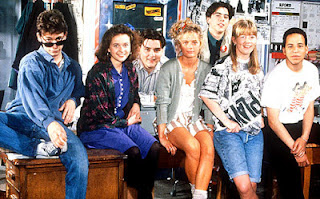 In 1989 Doctor Who ended and Steven Moffat's writing career began. This latter event provides a bookend for Doctor Who's 25th season, propped up on the other end by The KLF/The JAMs/The Timelords hitting number one with "Doctorin' the TARDIS," all of its explorations of the program's history suspended arbitrarily between these two events.

1989 is a conceptual oddity for me - a year zero in every sense of the term. It is the first year I have any associations with - the first one in which I was aware of the calendar as a force unto itself. There is no visible reason for this. It was the end of first grade and the beginning of second, and in that regard a transition from something of an idyllic year in my childhood to something rougher and more uncertain. But those are school years - a calendar that my life has always been well attuned to, but a separate one from the calendar. I am aware that 1989 existed, that it is the first year I have any memory of as a year, but it is an empty signifier, carrying weight but no content.

Pop Between Realities, Home in Time for Tea 33 (Marvelman) 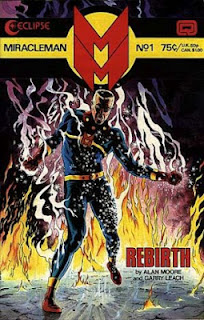 I always knew there would be an Alan Moore entry around here. I wasn't completely certain where - it could have gone at the start of the Cartmel era, but it was always probably going to go right here, before the "canonical" Cartmel era begins. No, the hard question was what I was going to pick. I mean, one of these years I'm going to get around to doing the book I want to write on Alan Moore and Grant Morrison. Which means I really don't want to do a general "Alan Moore" post here. Which left me having to choose among The Ballad of Halo Jones (which Cartmel apparently handed to anyone coming on to write for Doctor Who), V for Vendetta (for the anarchism), Swamp Thing, or perhaps Watchmen (for their revampings of past characters). All would be perfectly reasonable choices for the time period. But Halo Jones felt too close to the 2000 AD post I'd already done. V for Vendetta felt too oversignified and not quite relevant enough to Doctor Who. Swamp Thing and Watchmen felt too American.