The Point is to Change the World (The Last War in Albion Book Two Part 5: Before Watchmen: Minutemen)

Previously in The Last War in Albion: Actually, it basically just left off in the middle of More's lengthy description for the first panel of Watchmen.
THE SECOND ITEM OF REMARK IS A 1” DIAMETER SMILEY BADGE, COLORED A VIVID SUNSHINE YELLOW AS IT LAYS THERE IN THE GUTTER SMILING UP AT US AGAINST A BACKGROUND OF LURID BLOOD RED. IT HAS SOMEHOW LODGED IN THE GUTTER SO THAT IT WON’T GO DOWN THE DRAIN, AND SIMPLY REMAINS STUCK THERE, STARING UP AT US WITH ITS JARRINGLY INANE EXPRESSION. A SMALL SPLASH OF CRIMSON STAINS THE FRONT OF THE BADGE. A SINGLE TINY SPATTER ACROSS ONE BLACK CARTOON EYE ON THE FACE OF THE BADGE. THAT’S BASICALLY THE WHOLE OPENING IMAGE, UNLESS YOU WANT TO STICK A CANDY WRAPPER THAT’S ABOUT TO FLOAT DOWN THE DRAIN, IN WHICH CASE WE HAVE A PACKET OF MELTDOWNS, WHICH ARE LIKE TREETS (ENGLISH) OR M&M’S (AMERICAN) ONLY WITH LITTLE BRIGHTLY COLORED ATOMIC SYMBOLS ON THE WRAPPING. ONLY INCLUDE CANDY WRAPPING IF IT DOESN’T DETRACT FROM THE SIMPLICITY OF THE IMAGE WITH THE GUTTER, THE BLOOD AND THE BADGE, THOUGH, BECAUSE THIS IMAGE IS PRETTY IMPORTANT. IT GIVES US THE BLOOD SPATTERED SMILEY-BADGE, WHICH IS A PRETTY WORKABLE SYMBOL OF THE COMEDIAN’S MURDER, WHICH RUNS THROUGH THE ENTIRE SERIES, AND IT ALSO GIVES US A FAINT SUBLIMINAL PREDICTION OF THE ENDING WITH ITS IMAGE OF THE GUTTERS OF NEW YORK AWASH WITH BLOOD. ANYWAY, SEE WHAT YOU THINK AND LEAVE OUT THINGS LIKE THE SWEET WRAPPER IF YOU THINK THEY’RE EVEN SLIGHTLY DISTRACTING. WE’LL HAVE PLENTY OF TIME TO GET ALL OUR CUTE BRAND NAMES IN LATER ON IN THE SERIES. THE ACTUAL TEXT UPON THIS FIRST PAGE IS ALL TAKEN FROM RORSCHACH’S JOURNAL, WHICH WILL BE A MORE-OR-LESS CONTINUING FEATURE OF THE NARRATIVE THROUGHOUT THE SERIES. I MENTION THIS IN CASE YOU THINK IT MIGHT BE NICE TO VISUALLY DIFFERENTIATE BETWEEN RORSCHACH’S JOURNAL AND ANY OTHER CAPTION BOXES THAT MIGHT OCCUR BY GIVING IT A SPECIFIC COLOR A SPECIFIC SHAPE OR LETTERING STYLE OR SOMETHING. I SUPPOSE IT’D BE NICE IF WE COULD ACTUALLY GET SOME OF THE CHARACTER OF RORSCHACH HIMSELF BY THE WAY HIS JOURNAL IS WRITTEN, ALTHOUGH I SUPPOSE A SUITABLY WARPED-LOOKING STYLE OF HAND WRITING MIGHT BE OFF-PUTTINGLY DIFFICULT TO READ OR TIME CONSUMING AND DIFFICULT TO MAINTAIN. MAYBE YOU COULD SUGGEST A SORT OF SCRUFFINESS WITHOUT GETTING TOO ELABORATE, THOUGH. PERHAPS A MORE RAGGED EDGE OR A FAINT SPATTERING OF MESSY INK BLOTS INT HE BOXES HERE AND THERE AS IF THEY’D BEEN LETTERED BY A PEN WITH A SPLIT NIB OR SOMETHING. ANYWAY. THE OPTIONS ARE THERE, SO JUST DO WHAT YUOU WANT. IN FACT, IF YOU’RE ANXIOUS TO SEE ANYTHING THAT EVEN SMACKS OF VISUAL FLUMMERY THAN PLEASE FEEL FREE TO MAKE RORSCHACH’S BOXES THE SAME AS EVERYONE ELSES AND RELY UPON THE TEXT IN THEM TO SET THEM APART FROM OTHER NARRATIVE WITHOUT IMPOSING ANY VISUAL GIMMICKS NEEDLESSLY. OKAY. THAT’S THE PRE-AMBLE OUT OF THE WAY. SO GIVE IT ALL YOU’VE GOT AND LET’S SEE SOME GOOD DRAIN ART HERE” in 1985.

Indeed, that’s the crowning irony of Watchmen: that the work that established Moore as the most important voice in American superhero comics was also the work that predicated his furious departure from that industry, and one that Moore has backed away from in so many regards. The result is that the insistently visible authorial presence becomes defined as much by Moore’s retrospective absence from the text as it is by Moore himself. There is, as Morrison observes, a conspicuous god of Watchmen, but what is most conspicuous about him (and one can, at least, be confident about his gender) is a god comprised of negative space. The god of Watchmen is a tangible lack within it - a gap that demands to be filled in on the map of its psychic territory, to be named and outlined, as though doing so will finally, at last, serve to snap all the pieces into place and explain everything.

"Art that cannot move people effectively loses the war. Take the techniques that make it a masterwork and use them for changing the world. Your purity only hurts the reason you’re doing it. Do you want to feel self-righteous or do you want to win? I like to win. The point is to change the world.  A story is a machine that kills fascists. A story is a machine that kills whatever you want it to. Be afraid of stories, be afraid of storytellers. They are only trying to lie to you." - Kieron Gillen, Kieron Gillen Talks Watchmen 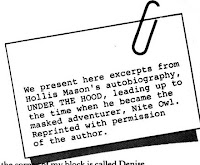 Depth of palette, not palate, shirley?

Moore's script is the utter opposite of that "how to write a comics script to make an artist's life easier" thing that was popular on Tumblr a few days ago. though you get the sense he's writing in part to make Gibbons crack up.

Spoilers Below 4 years, 7 months ago

Indeed, arguably even Alan Moore, the one writer who can definitively and unambiguously be said to be capable of writing something as good as Watchmen only ever did so the once.

I'm curious what your answer is for this one. I'd guess From Hell, but watch it be something totally out of left field like his somewhat under appreciated WildCATS run...

Spoilers Below 4 years, 7 months ago

I recall reading that after a while, Gibbon's wife would go through the scripts with differently colored highlighters to mark the bits that were actual panel descriptions, so he'd know what to draw, but that might be apocryphal...

I may be misunderstanding, but I thought he was referring to Watchmen itself.

I believe it was Gibbons himself who did that; and yes, the script pages reprinted in Absolute Watchmen are highlighted that way.

Moore's scripts are easily parodied, but I've always appreciated the way in which they give guidance not just on what to draw, but on why to draw it.

Ice has the intended meaning. Note, of course, the "arguably." I'd personally say From Hell is superior to Watchmen, as are Snakes and Ladders and The Birth Caul.

"I've always appreciated the way in which they give guidance not just on what to draw, but on why to draw it"

Exactly why I really love Moore's scripts, it's a great approach that leaves a lot of room for the artist (speaking as one). Whatever problems he may have had with editors and comic book companies, I feel (I may be wrong) that Moore has a lot of respects for artists.

Beautiful artworks and colouring above by Cooke and Stewart on The New Frontier.

I never had any inclination to read Before Watchmen at all, but I received the Ozymandius issue as a gift - which felt a bit like getting an odd jumper that you'd never wear. I did read it though and was utterly underwhelmed, and it added zero for me to Watchmen.

But the Minutemen above looks pretty lush and I may look at it sometime.

I would just like to bring up the very interesting article Who Whitewashes the Watchmen? by William Leung for an alternative take on Darwyn Cooke's contributions to Before Watchmen. I haven't read any of Before Watchmen so can't actually comment on the quality of the actual stories, but I did find this to be an interesting article, and haven't seen it mentioned by anyone else here:

Oh and love the moment of seeing the section of the interview with Kieron Gillen and how it ties into essay titles so far. Look forwards to the upcoming titles and how they fit in (if it works like that). Excited about what is said about stories and storytellers.

"The point is to change the world." - *this* is how I feel about stories.

I've only had a chance to read a bit of part one, but this looks like a really interesting essay. Thanks for the link!

Make sure you read through the comments as well as they also make for some interesting reading, with both support for and against the main arguments in the article