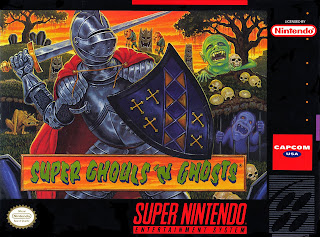 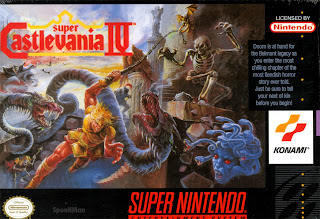 This also played out on a larger level. Super Castlevania IV has a password mechanism, which, especially combined with its comparatively accessible difficulty level, meant that the game was firmly beatable. Super Ghouls ‘n Ghosts was not unbeatable, but was at least less beatable. You could give yourself a large number of starting lives, and continues are fairly easy to come by (and easier the more lives you have to rack up points with). This was enough to make it so you could chip away at the game and eventually beat it. But it’s still quite the timesink, especially given that beating it requires two playthroughs. With no continue mechanism, unless you have the luxury of being able to leave your console on between play sessions (which is to say, unless you’re the only sibling who plays it - not even plays it regularly, frankly, given that, let’s face it, any self-respecting sibling would take you wanting to leave the console on as an obvious reason to want to play a game, even if they do not regularly) beating the game is not necessarily feasible for reasons beyond raw difficulty.
But the bulk of these differences are not really ones of quality. I’m inclined to treat the technical unfeasablity of beating Super Ghouls ‘n Ghosts as a comparative flaw, along with the second quest padding, but both are titans of their genre, showing the way in which careful design of control schemes and rules can make for amazing games.
Both are also games about the undead. This is an interesting issue on early Nintendo consoles. As part of its basic strategy for breaking into the US market in the mid-80s, Nintendo of America created an aggressive licensing system where games would have to be approved by Nintendo before they could be sold, thus creating the Nintendo “Seal of Quality,” which did nothing to actually ensure quality, but at least provided a useful marketing contrast to the Atari era, which, in popular wisdom, was brought down by an excess of sub-par games. (The fact that the most infamous of these was made by Atari perhaps indicates the degree to which Nintendo’s plan was not entirely based on a reading of the facts on the ground so much as it was on the dominant interpretation of them.)
A pragmatic side-effect of this was a bevy of censorship. This fact will become a significant detail in the Sega/Nintendo rivalry in terms of the portrayal of violence, but for our purposes the more interesting one is the censorship of depictions of religion. This has already dramatically impacted two games we’ve talked about: both ActRaiser and Final Fantasy II were much more explicitly religious games in the original Japanese, but had this largely pared down and reworded into mealy-mouthed alternate phrasings. (God becomes “The Master” in ActRaiser, the Tower of Prayer becomes the Tower of Wishes in Final Fantasy II, etc.)
In terms of these games, it resulted in the scrubbing of a lot of crosses. For Super Ghouls ‘n Ghosts, this mostly was restricted to the coffins out of which the first level zombies emerge, which went from having crosses on them to, somewhat puzzlingly, having ankhs. Super Castlevania IV had considerably more to scrub, with crosses scattered throughout the game (along with bare-breasted statues and blood, both of which were also removed).
But the result of this censorship was half-hearted at best. Yes, the stained glass window overlooking the password input no longer has a cross in it, but it’s still clearly the stained glass window of a church. And in nearly a quarter-century of playing Super Ghouls ‘n Ghosts, I never once noticed that all the crosses in the cemetery were actually ankhs, simply because the two are similar enough that I never actually noticed that there was anything odd about them. All of this, in other words, is still firmly within the Christian aesthetic of the undead as affronts to God. Just with the actual, “Christian” bit clumsily filed off.
The horror of the undead, as a concept, comes from the way in which they provide a perversion of life - from the inherent difference between life and the negation of death. They are qlippothic, to borrow a term from the wider reaches of magickal theory - empty and twisted shells of a thing. But in Super Castlevania IV and Super Ghouls ‘n Ghosts, so is their ostensible opposite. The thing that the undead lack has itself been hollowed out.
Which is an oddly good metaphor for a genre that was unknowingly in decline. Throughout the 16-bit era the history of technology was an unceasing push for 3D. While there certainly are good 3D platformers, this was not a boon to the genre. And so these games are oddly perfect images of the time - opulent, “super” versions of classic games that are, at their core, also oddly rotted and decaying things.
Something between hindsight and foresight tells us that this is an important metaphor. Certainly there is a sense of rot that plays out over the course of the 16-bit era. But at the end of 1991, in the rush of initial games, it all seemed like such a wonderful idea - a sudden and thrilling improvement to the long-beloved world of Nintendo Games. None of us with the slightest idea that we were just zombies lurching towards the business end of a whip. Or possibly just a dangling one.
A Brief Treatise on the Rules of Thrones 2.01: The North Remembers will post on May 26th.
Share on Twitter Share on Facebook

One of the things I always found interesting about the Ghosts 'n' Goblins franchise is the fact that it is always indebted to its origins as an arcade game, despite the console ports being the reason for the franchise's longevity. The difficulty in trying to beat the game, for example (limited continues, few save points in levels, etc.), is patently a mechanism to get more quarters in the machine, and so much of the game seems tailored for the arcade experience...which of course ends up being bizarre when you realize Super Ghouls 'n' Ghosts was console-only.

Ah, well. One of those games that perhaps work slightly better now that emulators and save states are a thing.

I love the Ghosts n Goblins series. Somehow. Super's second loop may be the toughest of the lot, because the ultimate weapon you need is in no way suited for fighting the penultimate boss. At all. Still, beating it and learning its intricacies crackled with a forbidden nature. Then I went after the rest of the series. It wasn't until 2006 that we got one that actually allowed saving. The best one, however, has to be Ghouls n Ghosts for Sega Master System. Lost between the cracks, of course, since nobody was playing SMS in 1987, let alone in 1990 when the Genesis was already out. Its main difference? Upgrades you find are permanent, and the treasures respawn if you die. It, therefore, is the only Ghosts game that gets easier the worse you are at it. Marvelous.

When will you be fulfilling your obligation to your Patreon backers and publishing the overdue State of Play for Sunday's GoT?

"At $300 a week, I will, on Sunday evenings, as fast as I possibly can without sacrificing quality, write up Game of Thrones reviews, consisting of a "State of Play" in the style of A Brief Treatise on the Rules of Thrones, and a review, which, unlike the "Analysis" section, will be very much a first impressions (well, second impressions, since I'm not going to do the State of Play during my first watch) review of the episode as a piece of television, with all opinions subject to change in the fullness of time."

I don't want to speak out of turn or jeopardise the usual amicability of the comments section, but...I'm hoping that's some kind of satirical parody of Martin's fans badgering him to finish the next book or something. If you're serious, that's a pretty petty question/quibble.

Yeah, I feel like there was a much less rude way to say this.

It's up, isn't it? Isn't this it? http://www.philipsandifer.com/2015/05/unbowed-unbent-unbroken.html

/glances at list of Patrons to see if there is anyone named Ray who might be in a position to ask this question with the slightest bit of moral authority.

Of course, the tradeoff for that is absolutely *atrocious* graphic and sound design. Far preferred the port for Genesis (which had an invincibility cheat if you just wanted to appreciate the levels).

I'd argue that Super Mario Maker is a definite rebuttal to the idea that platformers are dead. As that relates to The Work go look at Nemesis' reaction to a democratized game. I'm of the opinion that Nintendo's continued survival vs Sega is directly related to which side each chose to take in the early stages of the Console War and that until that battle is ended (which involves one subsuming the other) Nemesis will be a part of the larger culture.