“You hear, but you do not understand”: Babel 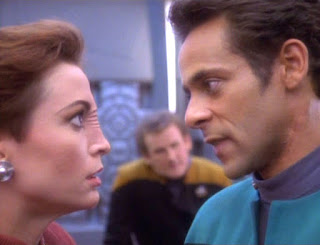 \
Realistically speaking, I don't think this is an episode anyone is particularly excited or enthusiastic about. I do think it's a grave misconception and the deepest of follies to dismiss this first half-season outright, as much of mainline fandom is wont to do: In fact I'd argue this crop of episodes is part of the single greatest season in all of Star Trek, counting Star Trek: The Next Generation alongside it, of course. On the other hand this is not to say that each and every story this year is a triumph, and, on Star Trek: Deep Space Nine at least, we're about to enter a run of episodes where the new show, so imperious and strong right out of the gate, is...less than successful.

Not unrelentingly terrible, it must be said. I don't think there's an episode in this run that is unwatchably or offensively bad, and there's at least one interesting and/or memorable scene in all of them. And each and every one does contribute something to the show's rapid and astonishing rate of development and maturation, even if it's only something as simple as “never do that again, ever”. But even so, we are entering a phase where Star Trek: Deep Space Nine seems to be struggling to define itself a bit, and while there's no shame in that it does cast perhaps more of a shadow over the year than it otherwise would have given that, from this show's perspective, it's a truncated half-season. Normally I would applaud a restricted episode count like this and while I do still definitely believe it's infinitely preferable to have fewer episodes a year than more, that usually comes with the unspoken expectation that each and every episode is going to be, if not a masterpiece, at least really, really good and demonstrative of how attention to quality trumps quantity.

“Babel” is not that. None of these episodes are. Although that said it's probably by my count the second-best of this run...It's entirely watchable, and I didn't ever find myself annoyed to the point I wanted to switch it off and go back to rewatching Original Dirty Pair (any time not spent watching Original Dirty Pair ought to be well-justified). The actors' performances are still remarkably compelling and they've all already clearly found their voice with their respective characters (even if they're being given material like this to read) and it's got a decently suspenseful pace to it. It doesn't have any cripplingly massive flaws that are worth spending an entire essay complaining about...except for the obvious really big one that the premise is too self-evidently ludicrous and silly to take seriously or get invested in (not the last time this will happen in this run of stories, I'm afraid).

A pandemic isn't even a terrible idea to base a Deep Space Nine story around, especially a pandemic involving a breakdown in communication: We had a murder investigation in “A Man Alone” and an episode all about differing perspectives and Kira's past in the resistance cells in “Past Prologue”, and there's a lot of potential mileage to be had in exploring how a team of operations administrators deal with an outbreak and having to invent quarantine procedure effectively on the spot. I'll even go so far to say making aphasia a plot point was a decent concept: Just two episodes ago we were looking at the barriers that we run up against when people of different backgrounds come to work together, and here's a story all about a literal inability to communicate with one another. Aphasia in particular means you can have characters who make perfect sense to each other, but not to anyone else. There's absolutely the makings here of if not a masterpiece, at least a solid story and a minor classic.

The problem is that somewhere in the execution things never quite add up to more than the sum of their constituent parts. For one, making Miles O'Brien and Jadzia Dax the first victims and then shunting Colm Meaney and Terry Farrell off-camera to go lie in a bed for the majority of the episode strikes me as somewhat of a mismanagement of your cast, even if Avery Brooks, Sidding el Fadil, Nana Visitor and René Auberjonois all give commanding performances and carry the episode fine. “Babel” also marks the beginning of a brief but annoying trend in this show for what I call “Odo and Quark Save the Day” stories. It's just as obnoxious as the old “Wesley Saves the Day” stories from Star Trek: The Next Generation, but with the added whiff off rubbing it in the faces of the allegedly detached Starfleet tightasses, most likely courtesy Ira Steven Behr. If you must watch one of these, “Babel” is not one I would recommend: There's another episode coming up later in the season that ends with this plot device that at least has more to offer.

There is also the minor issue that “Babel” was pitched to Star Trek: The Next Generation and languished around in production limbo for years until someone decided to give it a try on Star Trek: Deep Space Nine. And the fact that both Star Trek: The Next Generation and the Original Series did tepid pandemic stories early on in their first seasons. It's demonstrably a better fit here, yes, but only marginally more effective.

There's a lot of good individual scenes, though. The bits in the teaser before Miles is infected where he's being run all over the station to fix things are endearing, although they do border on the cartoonish (and why can't Jadzia fix her own lab?). Quark and Odo obviously steal the show, especially in the last few acts, but there's a bunch of other little moments where different characters interact with each other: Kira and O'Brien are already cute together, and that bit of ad-libbed physical acting between Avery Brooks and Cirroc Lofton is wonderful to watch. Kira's eleventh-hour gambit with Surmak Ren is marvelous and Nana Visitor plays it to a T. And even though she gets criminally little to do in this episode, Terry Farrell makes the best use of what few moments of screentime she gets-She plays Dax every bit as competent technically as Chief O'Brien even when the script doesn't seem to want her to be, and she has Jadzia light up whenever Commander Sisko comes to the improvised ward. And it's easy to miss because it's only ever in the background, but she's also very tender and caring with Jake too. Jadzia doesn't need language to express herself.

Really the best I can come up with to say about “Babel” is that it's a functional and competent episode of Star Trek. And let's not forget that back in these days, that's perfectly fine: You tune into a show for an hour a week because it's on and so long as it's reasonably entertaining it can be called a success. I daresay this is a far better position to be in where we can call something like this mediocre instead of “Allegiance” or “The Loss”. Not every episode needs to be an event. This does mean, however, that not every episode is going to be one that resonates strongly enough to warrant being revisited years after the fact. “Babel” didn't offend me or make me angry, but I don't think I ever need to watch it again.

It's true of this run of episodes, that while they're not the same as the opening episodes, being firmly entrenched in the "peak Trek" timeframe is all the redemptive reading they really need.

I like Babel a lot. But I mean, I like Captive Pursuit a lot, too. I can even understand the ... well, ill-thought, story logic of writing out your two most competent characters (and two of your best actors, incidentally) right out of the gate, though writing out your science officer in an episode like this seems like a major brain hiccup.

Ironically what I think probably makes this episode average is that a pandemic episode on this station should be something with higher (like, midseason or season-ending) stakes. And that's why it feels like an imported TNG episode. Because it's the sort of thing the Enterprise would just encounter then brush off the next day after Beverly had cleared it up, where obviously Data would have been the one to save the day at the end, perhaps with a Worf assist, or perhaps even with Worf hijacking the sciencey doctor at virus-point to get the job done.

Avery Brooks and Cirroc Loften nail the pathos here, though. Every episode seems them bring it home more and more and show how the family dynamic in space should be done. And Quark saving the day with Odo hasn't gotten to be a recurring meme yet, but it does effectively express his insane resilience, which is character building this early on.

Great period of "peak Trek" or not, it's not as though contemporary TNG doesn't have some odd stuff coming up, either. For every Move Along Home there's a Masks.

Am I the only person who really likes "Masks"?

Nope, I adore "Masks" too. That post is going to be an absolute spectacle of redemptive reading when I eventually get to it.

Hm, my problem with this episode - and, like you, I think "problem" is perhaps too strong a word for something that is as fun to watch as this - is something you considered fine: the pacing. It felt to me that some scenes dragged a bit, whereas others felt rushed - basically, the emphasis was in the wrong place.

I didn't find the concept ludicrous at all - it's basically turning a real-life injury into an infection, which is a pretty mild SFisation for Trek. I also thought the virus having a secondary "fever" phase was plausible, although totally unnecessary. I did, however, have a problem with how they dealt with it. Why pack people into crowded makeshift wards when their only symptoms are linguistic (plus maybe tiredness, that wasn't clear)? Can't most of them just be confined to quarters? Also, linguistic communication isn't the only sort (as the scenes with Ben and Jake showed), and they ought to have done more with (for instance) pointing.