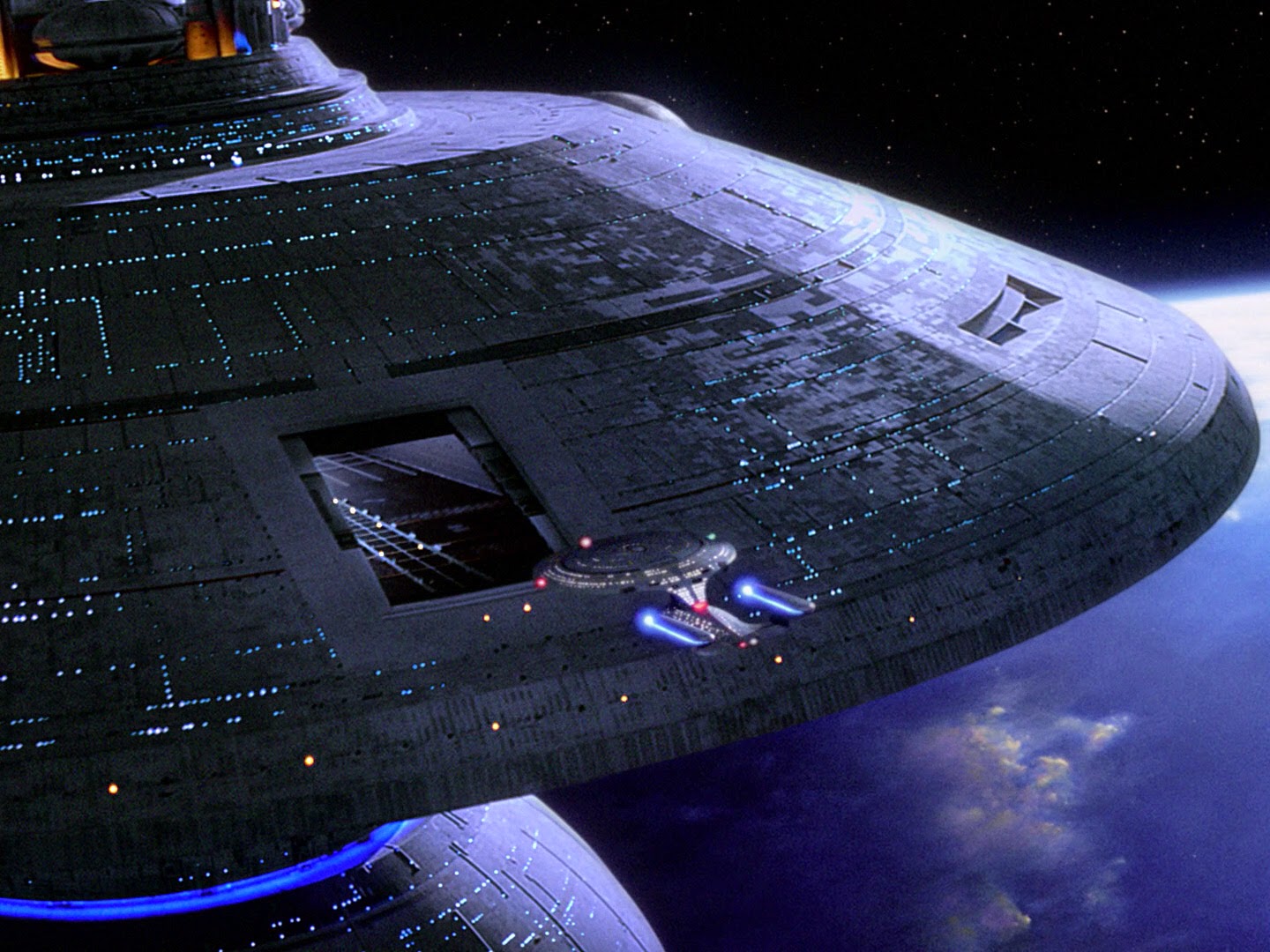 A common theme in much science fiction, we've dealt with the subject of both transhumanism and posthumanism rather extensively already. In Star Trek, this has traditionally manifested in the multitude of non-corporial entities, godlike beings and androids that tend to show up. The Original Series was notoriously ambivalent on the subject, for as much as 1960s Gene Roddenberry hated the idea of machines replacing people, he also seemed somewhat fascinated by the notion that humans might become hyper evolved beings of pure thought, in essence, ideal rational actors. 1980s Gene Roddenberry, along with his contemporaries, have a very different viewpoint: First of all, there's Data, who, while he doesn't yet carry all of the symbolism he's eventually going to, is already an indication Star Trek: The Next Generation might be toying with a novel conception of humanity.

But also 'round about the 1980s, transhumanism came to be associated in the pop discourse first and foremost with a very specific set of beliefs, typically involving augmenting or replacing bits of materialistic human life with mechanical, robotic and digital components. The rise of the personal computer allowed for a general ossification of the definition of cyborg, and the belief humanity's future lay in becoming more and more intertwined with computer technology. The Borg are commonly read as a critique of this notion, a very simplistic and reductive pop Frankensteinianism that wrings its hands over unchecked material technoscience. But, as we will eventually discuss, this is not what the Borg actually are and, for various reasons, Star Trek: The Next Generation has a far more complex and nuanced relationship with the transhuman than this interpretation would lead you to believe.

This is, however, what “11001001” looks at with the characters of the Bynars, an entire species that has evolved in such close proximity to computers that their thoughts have become indistinguishable to binary code. Well, partially, because the episode is obviously not a critique of them: The crew is incredibly sympathetic to the Bynars all throughout, and Jonathan Frakes was so enamoured of them he wishes they'd stayed on as regular characters. And the way they're realised is rather charming, with each half of a “base pair” acting as a kind of gate and decisions being made through relaying thought-bits between them. Even the joke explanation they give for why they stole the Enterprise at the end of the episode, “you might have said no”, ties into this: As entities of pure logic on a life-or-death mission, they could not accept any potential failure state, so they engineered a situation where that would be impossible. It's a perfectly delightful conception of digital transhumanist philosophy as it popularly exists as of the Long 1980s.

This specific kind of transhumanism is, predictably, very grounded in technofetishim and materialism. The most recognisable manifestation of this in the contemporary political climate is likely the Church of the Singularity, a Silicon Valley-based faith that professes the rapid increased in digital computer technology over the past thirty or forty years is evidence of a looming “machine singularity”, where either our computers will become self-aware or will end up absorbing humanity somehow (a common version is the belief that humans will soon be able to upload our consciousnesses onto the Internet). It's the logical end result of the existentialist, positivist, materialist, technoscience-dominated flavour of Westernism that's come into vogue over the past few decades: When humans are reduced down to machines and , shortsightedness dictates that we can improve on the inherent randomness of nature with our Will through our evolved, superior deft mechanical touch.

There are a considerable number of concerns regarding the Church of the Singularity. Most obviously, by being an outgrowth of Nerd Culture it by default comes out of an inherent and extremely patriarchal superiority complex, and then there's the matter of so much of it being driven by corporatist technocrats with an already heated interest in selling you the latest digital status symbols. Most actual scientists will be quick to tell you that nothing the Church of the Singularity espouses is remotely scientifically feasible, and most of it rests on fooling you into thinking computers are much more sophisticated and intelligent than they actually are. But more to the point, it's completely repugnant to the worldview I'm increasingly interested in: This kind of rote materialism is not only anathema to any kind of animist or spiritual understanding, by reducing human existence down to the level of what amount to tools, it also denies humanity itself. Thankfully, this is not the only kind of transhumanism, and this is not the only kind of singularity.

Throughout genre fiction there is, and has always been, a strong predilection to what can be and has been described as a “singularity archetype”: A kind of poorly-translated vision of what humanity's future might look like. Star Trek itself has already given us a few, such as the aforementioned hyper-evolved beings of pure thought, comparatively crude as they might be by the standards we're now holding ourselves to. But the best one the franchise has given us by far has been The Traveller: A person who instinctively understands the connection between space, time and thought. There is a further link between us and these things that the spirits understand, even if they only exist sometimes in the realm of pataphor and allegory. There is a desire to return to this understanding; to reclaim our identification with our spiritual selves, and it's a desire I frequently map onto the relationship we as readers and writers have with idealism and utopianism. Now is not the time or place for this discussion, but this drive is but one manifestation of our yearning to reclaim what we call a Glorified Body. And there *is* a place for technology here, as it can help us construct a rough approximation of what that reclamation and rejoining feels like. Remember, Star Trek: The Next Generation manifestly does not say the Bynars are evil-They help the Enterprise and have their own role to play in its journey of self-discovery and self-actualization.

The hands-down best example of singularity fiction I can think of unquestionably has to be Dirty Pair, with Kei and Yuri perhaps even acting as a kind of Glorified Body themselves. It's they who demonstrate most clearly a functional median between these two forms of transhumanism: Kei and Yuri are “The Lovely Angels”, because they are divine avatars who represent both valuable and beloved ideals as well as serve as the vessel by which the universe brings about necessary progressive change on a cosmic scale. It is said the singularity is marked by oftentimes catastrophic and traumatic immediate change, and looks like the apocalypse to the unenlightened. But Kei and Yuri are also Angels because they play the role of Angels, diegetic metaphors. But the girls are also supposed to posses material bodies genetically engineered to be perfect; recursive metaphor, if not outright pataphor, for the Glorified Body. And, being a story, Dirty Pair is already a performative allegory for the spiritual and social growth humanity has before it.

And, fittingly, the Holodeck returns in this episode to play a crucial part in the Bynars' plan. We have Minuet, a sentient, hyper-aware programmed being who exists in multiple worlds at once, and the interlink between the Holodeck and the rest of the Enterprise facilitates the Bynars being able to backup their history. In fact, “11001001” was originally meant to air before “The Big Goodbye”, with the malfunction in the latter story going to be attributed to the Bynars' enhancements here. Perhaps a consequence of this blurring of the boundaries between realms can also account for the memorable turns from the regulars: Data and Geordi both take critical further steps to the characterization they'll become famous for, Worf is starting to become more pronounced and developed and even Tasha Yar gets to do some things we might expect to see a character with her backstory and personality do.

Reading “11001001” in this context gives me a newfound appreciation for the shot of the Enterprise approaching Starbase 47. Perhaps counterintuitively, it's one of my favourite images from Star Trek: The Next Generation, despite obviously being a reuse of a shot from Star Trek III: The Search for Spock. But I've always felt it looked so much better here: Crisper, more organic, and more darkly evocative. Perhaps this then is a metaphor in itself, for Star Trek: The Next Generation is finally starting to show signs it might just transcend the Original Series, because it understands a set of spiritual truths its predecessor never could.
Share on Twitter Share on Facebook

*looks at title of article*

No, but seriously, a good piece. The Bynars are one of my strongest memories of Season 1; I'm surprised you didn't make more of their obvious visual similarity to the Talosians. To me they've always seemed to be implying that the technofetishistic singularity ("The Rapture for Nerds") has more in common with that particular portrayal of the dead-end future than said nerds like to think about.

I'm curious as to where you're going to go with the Borg. I've always seen them as a dark mirror of the Federation, imperialist, conformist technophiles who consume other cultures to add to their own in a relentless quest for smug perfection.

Sorry, but you're going to have to explain the title to this dummy.

It's binary code, which if converted to ASCII (the default international method for encoding text) turns out to be two pairs of Japanese characters separated by a space. Transliterating those, they turn out to be "Kei Yuri."

Well, I'm happy someone took it upon themselves to translate all that out at any rate :-)

I would have had absolutely no idea what the code meant! Interesting that this episode was meant to be before The Big Goodbye, as the Holodeck for me is one the powerful transformative tools in the show, and the Bynars were such beautiful characters. Lovely essay.