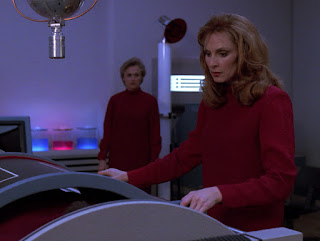 There was an urban legend going around awhile back about an entire intro class failing due to rampant, universal plagiarism, the kicker being the reveal that it was an ethics class. I've also heard a variant where criminals were getting caught illegally profiting off of resold ethics textbooks. That's sort of what I was thinking about as I was working through this episode.

“Ethics” is, to my knowledge, considered a highlight of the fifth season. In Starlog's episode guide from the mid-1990s (which for the longest time was my primary insight into what conventional wisdom on any of these stories was) there was a little Starfleet emblem next to the title of this episode, an indication that this was one of the editors' personal recommendations. Longtime readers of my guides will have doubtlessly picked up on my thoughts about this already: Typically when I go into this sort of background before I actually start analysing things it's a sign that I disagree with it just about entirely. Well, I'm certainly not about to go against type now. I've tried to like this episode, many times, in fact. But I just can't get passed the fact that the fundamental, well, ethical stand the story seems to be taking just seems so fundamentally wrongheaded. Not to mention how there's some cratering characterization problems on display.

So I mean first of all, Worf gets paralyzed in the most humiliating way imaginable. He's “distracted” because he was too busy thinking about losing to Deanna in poker? Seriously? That's not a tragedy, that's a black comedy farce, which would be one thing if that set the tone for the rest of the episode, but it doesn't. And Worf is embarrassed about losing to Deanna in a game of skill and bluffing where she clearly played more strongly? That doesn't strike me as the way an honour-bound warrior would react to losing to a worthy or superior opponent and sounds uncomfortably like Worf is just sexist (and given how he's the favourite of the writing staff, particularly Ron Moore, that's an avenue I'd rather not go down).

This naturally leads into the episode's big “ethical” dilemma, and its big “ethical” screw-up. At least the subplot between Worf, Deanna, Alexander and Will (we'll...come back to Will) basically amounts to an examination of paraplegia and the right to die. And Star Trek: The Next Generation handles both with all the trademark nuance it displayed in such classics as “Blood and Fire”, “Angel One” and “Violations”. I can't actually think of a way this could have landed more spectacularly wrong had it been deliberately trying to: First of all equating disability with something like, say, total brain death is basically appalling from any angle you care to mention and completely goes against the moral of “The Masterpiece Society” from just a few weeks back. Even if you grant the analogy and buy this is a right to die situation, which I very much do not advise you do, the central philosophical standpoint here still doesn't work, what with every other character yelling and screaming about how cowardly and shameful assisted suicide is, especially when it's apparently a sacred tenet of Klingon society. It's like everyone on the Enterprise temporarily forgot their empathy and cultural tolerance.

Will is portrayed the worst in this regard by far, and his depiction in this episode is nothing short of outright contemptible. He angrily goes on and on to Worf, lecturing him about how offensive and distasteful the practice of Hegh'bat is. Setting aside for the moment the fact that this is flagrantly imperialist for a white cis straight male to come in and tell someone who's not that how to live their life and how that runs completely fucking contrary to the values the Enterprise crew are supposed to espouse (and that's a pretty big thing to set aside), this story would also have Will take away Worf's choice in a right to death situation (again, if you grant that this is what this is, which I will solely for the sake of argument because “Ethics” becomes utterly incoherent otherwise), and Will has absolutely zero right to do that. I mean, I guess he technically has the right to complain and throw a hissy fit and refuse to help, but he's still prolonging suffering either way. And then his solution is to pass the buck to Alexander, effectively distilling his entire argument down to “think of the children”. Yuck.

Then there's the subplot with Toby Russell, which is all manner of fucked up for its own reasons. We're clearly meant to side with Doctor Crusher (also badly out of sorts this week), who lambasts Russell's experimental techniques for selfishly putting her research ahead of patients' lives. Well I'm no surgeon, so feel free to correct me on this, but I was generally under the assumption that experimental surgeries were done things in very rare and specific circumstances. Again, I'm not a medical practitioner, but I would gather that the field of medicine wouldn't ever be able to grow and evolve if doctors weren't allowed to take these kinds of risks if there isn't any other option. Which it kinda looks like there wasn't in this case: Worf wanted to die already, so it could only have been a win-win from his perspective: Either he makes a miraculous recovery or dies with honour, and considering we were just talking about patient's rights, it seems like Russell is actually occupying a more defensible position than Beverly here. Even Captain Picard seems to tacitly agree, not just on this but in terms of cultural relativity: He's the only person this week who appears to be talking sense.

(Incidentally, for some reason I keep associating Toby Russel with Doctor Pulaski. It's not that I'm conflating them, I've always known full well they're two different characters, that this is a fifth season episode and Kate was only in the second. Although, I suppose I could be doing something similar to that subconsciously as I can weirdly see Beverly and Kate having this kind of debate for some reason. Maybe it's because both Toby Russell and Doctor Pulaski wear those same surgery scrubs in this episode and “Samaritan Snare”, respectively.)

The one other big thing worth talking about in regards to “Ethics” is how it sets up a major portion of the rest of the show: Like “Power Play”, “Ethics” begins to lay the groundwork for a new romantic pairing Star Trek: The Next Generation will start exploring-Worf and Deanna Troi. It's not a particularly new one, there's been evidence you could cite dating back to the third season, but this is the point where it starts to become more clear that this is where these two characters are in fact going to end up. A lot of people blame Jeri Taylor for pulling the Worf/Troi ship out of thin air late in the seventh season in an last-ditch effort to grasp at straws, but it's plainly not: Deanna has obviously become a part of Worf and Alexander's extended family, perhaps partially because of how she helped them along in “New Ground”, but mostly because of this story, where she serves as a go-between support for both of them. And Worf even asks Deanna to raise Alexander should he die, and she even accepts. And unlike Geordi and Laren, whose relationship is never brought up again, Worf and Deanna remain more-or-less together 'till the end (although they're still hurt, as everything is, by the circumstances of said end).

But I'm getting ahead of myself again. These are all threads to discuss at far greater length in future episodes, and none of them really require putting yourself through the rest of “Ethics” to see them.
Share on Twitter Share on Facebook

Oh, this one! I wasn't particularly politically aware when I first watched TNG - I tended to be a pretty passive viewer - but even I thought the ethics were scrambled here. That's another one coming off my "maybe 50% good ones" list (which was originally based on the Kethinov ratings but has been considerably modified by this blog already).

Hrm... while I agree the episode misfires badly, I disagree on some of the specifics of where. First, it *is* a right-to-die situation in my opinion, because to make any sense at all the right to die has to be based on when the patient feels life is no longer worth living, not some arbitrary doctor-imposed limit. Certainly I personally would say that Worf's attitude that death is preferable to physical disability is ableist, but that doesn't change that it *is* his attitude and his choice, and it's not an out-of-character attitude at all (unlike the way that, say, his fretting over Troi beating him at poker is out of character, as you rightly point out).

As far as experimental surgery is concerned, AFIAK that is only ever done with patient consent. Unless I'm misremembering badly (which is entirely possible, it's a long time since I've seen this one), the problem is that there's at least one past case where Russell DIDN'T have that prior consent, and as a result Crusher doesn't trust her, even though IIRC she does get Worf's consent for this procedure.

" First, it *is* a right-to-die situation in my opinion, because to make any sense at all the right to die has to be based on when the patient feels life is no longer worth living, not some arbitrary doctor-imposed limit. Certainly I personally would say that Worf's attitude that death is preferable to physical disability is ableist, but that doesn't change that it *is* his attitude and his choice, and it's not an out-of-character attitude at all (unlike the way that, say, his fretting over Troi beating him at poker is out of character, as you rightly point out)."

Yes, totally. This is a more nuanced and compact way of phrasing what I was trying to say. When I complained about it being framed as a right-to-die situation, I was aiming my critique at the writers equating paraplegia with something like brain death. Obviously as you say it makes sense in-universe for Worf to hold the beliefs he does, though it is worth mentioning IMO that Ron Moore pushed for that and Worf wasn't originally going to have such hardline views.

I always thought Will's attitude here, albeit pretty closed off for an Enterprise space traveler, was terribly human. Maybe his attitude isn't right ... but it does feel like a natural reaction that he might have, thanks to the way Frakes plays it.

But possibly more importantly than his personal hang-ups, Riker does something here nobody has actually done in Star Trek yet but which eventually we'll see more of. He calls out the inherent cowardice of the whole Klingon Honor Dogma.

"So I mean first of all, Worf gets paralyzed in the most humiliating way imaginable. He's “distracted” because he was too busy thinking about losing to Deanna in poker? Seriously? That's not a tragedy, that's a black comedy farce"

Understanding the issues you go onto mention here, one thing I do like in the show is whenever the hardline image of the Klingons as a race of pure warriors is taken apart a bit. I'd like more comedy Klingons (though I know this one isn't funny).