Posted by: Forest of Illusions 5 years, 9 months ago 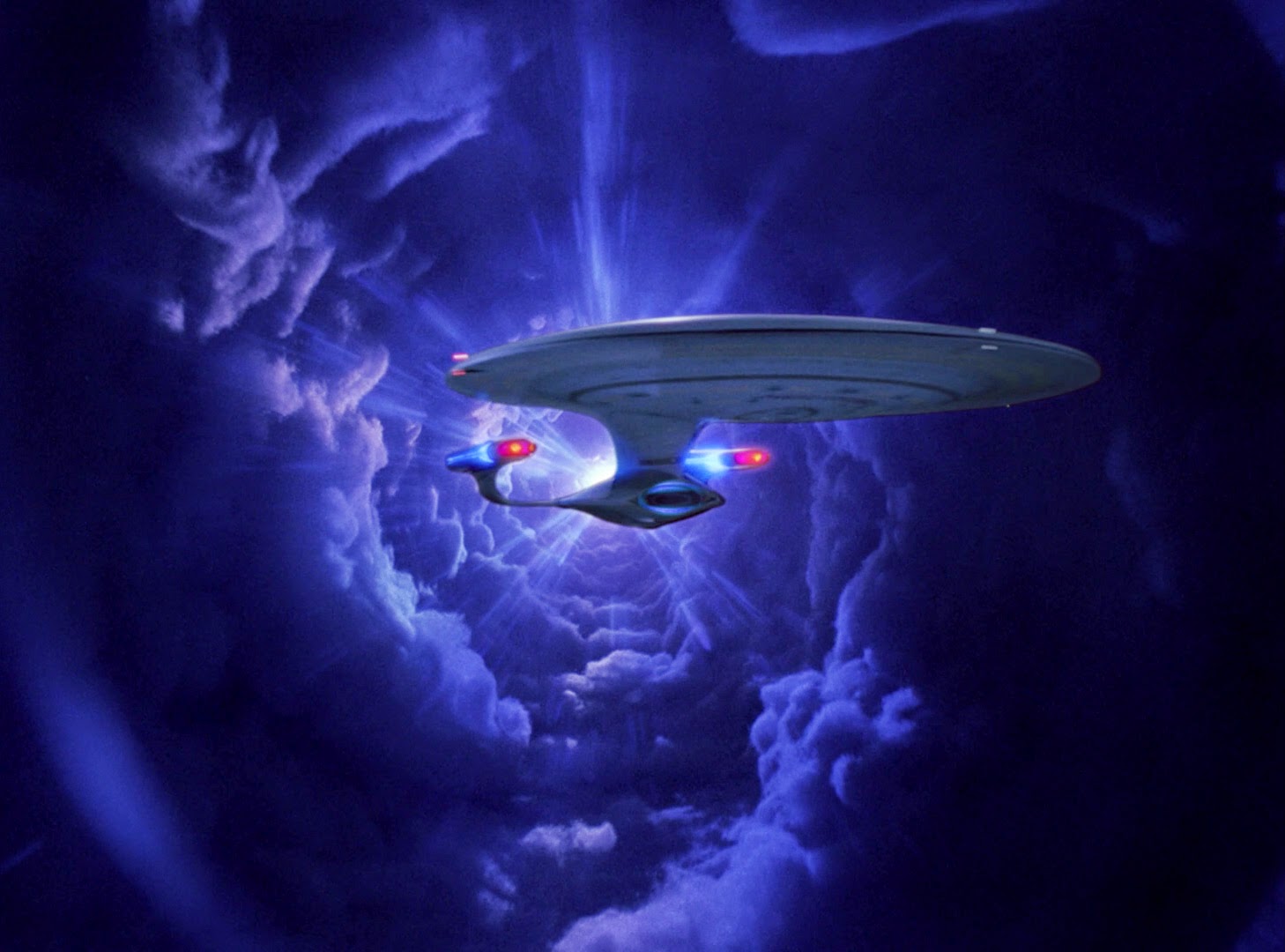 There came a moment while watching “Time Squared” when I was suddenly reminded for a brief moment of what it felt like seeing Star Trek: The Next Generation for the first time over twenty years ago. Somewhere, in betwixt Commander Riker making breakfast, Geordi and Data trying to figure out how to get the shuttlepod operational, Geordi's later tech briefing to the staff in the conference room and Deanna's conversation with Doctor Pulaski in sickbay, this momentarily stopped being “the show I write about for work” and once more became “the show I remember”.

This might be partially because the central conceit of this episode, a causal time loop, reoccurs again a few seasons later in “Cause and Effect”, which is one of my very favourite episodes in the series. Not that the actual plot of “Time Squared” is any sort of precursor or that “Cause and Effect” is derivative; what happens here is far more oblique and mysterious than the time loop from the later story. It's a bit more accurate to say that what we see here is an example of a branching dimension, and Troi even says as much at one point during the episode. One way to read this would be to roughly compare it with an actual physics theory called the “many-worlds interpretation”, which, put general, states that when witnessing the spin state of an electron, there are two possible observations: One where the electron is observed to have a positive spin “up” and one where it's observed to have a negative spin “down”. Well, the many-worlds interpretation states that for every individual instance where the particle is observed to spin “up”, there is another world where, for that same instance, the particle is observed to spin “down”, and vice versa. This is frequently extrapolated to the level of physical actions by humans on the macroscopic scale in the pop discourse.

So in “Time Squared”, we have two possible worlds: One where Captain Picard leaves the ship in the shuttlepod in an attempt to save the Enterprise from the energy entity and one where he doesn't. What would appear to be happening is a temporary intersection between these two universes, and the dilemma the crew faces is that they know from the log tapes that Picard's attempt to save the ship in the “leave the Enterprise” universe proves to be futile, but they can't figure out what the other observational state is. And here's where Star Trek: The Next Generation shows itself to be better than other science fiction, because not only does it not stop here (it would be perfectly acceptable, after all, for a Hard SF work to make a big deal just about doing a story built around the many-worlds interpretation, leaving it at that and waiting for us to tell it how clever it's being), but this gimmick isn't even the real point of the episode: Instead, it's a narrative device to tell a story about Captain Picard.

The reason Picard is so freaked out at seeing his alternate dimension counterpart is because they are in fact so very explicitly the same person, and the only thing that sets them apart is how they acted in one crucial moment. Our Picard cannot accept the idea that he would abandon his ship and his crew in their time of need, and yet he has to because there exists a world where he did precisely that. Of course, as the timelines start to sync up it does go a ways to redeeming him when it becomes clear he only did it because he thought it was in the crew's best interest and the only way to save them. And yet that in itself is revealing and where the alternate Picard made such a critical mistake: His assumption was that the entity saw the Enterprise as a living thing with himself as its brain and wanted to absorb him...And how freaking presumptuous is that? Even when Picard is trying to make a selfless act, he still does it in such a way that he makes it all about himself. He even tries to make a big dramatic heroic sacrifice that plays right in to the notion of him being this romantic and tragic leading man: The mistake is in forgetting Star Trek: The Next Generation is an ensemble, and you can see this revelation shakes Picard to his core when he stands alone in the observation lounge at the end of the episode.

Wonderfully, it's Doctor Pulaski who realises this. She immediately recognises what's troubling Picard and worries he might get so panicked and despondent she'll have to relieve him of command, and flatly warns Troi she won't hesitate to do so if she feels she has to. This is an interesting bit for how it provides yet another example of how the actors often give very counterintuitive readings and performances that directly contrast with what the written intent would seem to be: This is a Maurice Hurley script, and he seems to want to give the moral high ground to Troi here, having her sputter indignantly at Pulaski's doubts about Picard's mental and emotional state. But both Marina Sirtis and Diana Muldaur seem keenly aware that the far more effective way to deliver that scene would be to give it to Pulaski, and that's just what they do. Sirtis plays Troi taken aback and wrongfooted, trying to retain a facade of haughtiness while scrambling to tell Pulaski off: In a way, Troi comes across almost as arrogant and self-assured as Picard. Muldaur, meanwhile, remains calm, collected, remorseful and understanding-I adore how she tries to play the voice of reason and dejectedly sighs and shakes her head when Troi storms out of sickbay. The body language of both actors is out of this world, and, combining that with their delivery, they just knock the whole scene out of the park.

(In fact, given this and the pre-existing metatextual relationship we know the two characters have with each other, I'm inclined to read this scene as another instance where Troi's shipboard counselor role is showing signs of being deprecated.)

This theme of forcing the Enterprise crew to confront their own hubris isn't all that surprising once you learn the original draft of “Time Squared” had Q behind everything and that this episode was meant to be a lead-in to “Q, Who?”. Hurley says Gene Roddenberry prevented the team from using Q two stories in a row for whatever reason and that this hurts the final product-I'm not so sure about that, as I think the episode works well enough on its own, but I can see how adding Q would have reinforced its central concept a little bit more. But the question that merits raising here is whether Star Trek: The Next Generation *in particular* needs to be knocked down a few pegs the way this episode, “Q, Who?” and debatably “The Measure of a Man” (if you're inclined to read that episode that way) would seem to imply it does. It's not like the show is in an amazingly healthy state right now: Given the writers' guild strike and the calibre of stuff it's been tossing out this year, it's really not in a position to be boastful about much of anything. And it's certainly not the case that Star Trek: The Next Generation behaves with the same ham-fisted didacticism as its predecessor: It's proven that many times over by now.

And yet the threat is still there. The very last episode to air before “Time Squared” was “The Royale”, which was nothing if not an unapologetically retrograde throwback to the Original Series. And this wasn't the first time this show has done that, hell, it wasn't even the first time the show had done that *this season*. One gets the sense something is in badly need of being shaken up, regardless of whether or not it's even Star Trek: The Next Generation's fault that this needs to happen. It may someday turn out to be the case that the show will need to take the fall for things it didn't even do and isn't responsible for, and that's an eventuality we should be ready for. Whether it deserves to or not, Star Trek: The Next Generation has to face the prospect of answering for all of Star Trek's previous (and sometimes future) sins, which is why the spectre of Q looms over affairs even now. My Captain Picard doesn't have this on his conscience, but a reality exists where Captain Picard does, and that's not something I can completely ignore.

And this is maybe why “Time Squared”, while quite a good episode that works significantly towards building a thematic consistency in a lame duck season of television, only gave me a fleeting glimpse of that intangible ideal of mine. There are days where I really hate writing about visual media.
Share on Twitter Share on Facebook

Like "The Royale", this is one that I remember very strongly as one of the Weird and Wonderful pre-beard episodes -- this time, it's the image of the negative space wedgie, probably because almost every other magic space swirly thing in the franchise appears in front of the ship, but this one appears below it (and doesn't it look like the enterprise is getting flushed?). And like "The Royale", it always fares less well when I re-watch it, because it turns out that a huge chunk of the middle of the episode is just "People debating what they should do" rather than stuff actually happening.

It's funny that you word "Picard having this on his conscience" just because this and a few episodes surrounding it have determined for me that if he serves a role beyond 'leading man', Picard seems to be the conscience of the Enterprise. There's a real move this season to make him stand in contrast to the "old guard" or the outsiders, where we realize that what separates him from the previous generation is that he looks at history as historian, even as someone who presumably has a bit of his own, gleans the best of the past and tries (key word) to use it in a way to frame context, but not to influence his perception of the future.

Which is a long way to say he's open-minded even while he's an old bloke who by the nature of our species is a bit stuck in his ways.

The way Muldaur and Sirtis play it is interesting as they rightly realize it's nearly impossible to make Muldaur sound anything other than professional and right-minded, but I'm more interested in the possible good aspects of depreciating Troi's role as councilor (even as Guinan is raised up this season). Because as an empath, and indeed as Picard's confidante, when we say it's possible that she's too close to him in this and other situations it takes on a different meaning.

For an empath - and we'll cover this a little in the upcoming episode where she and he talk about horses and Betazoids with pets, too, perhaps - proximity could severely impede objectivity. Doctor Pulaski is no longer an outsider but she is not one of Picard's mentees - one of the next generation of hopeful adventurers helping him learn how to buck his generation's flaws and grow and in turn learn from him - she's his peer.

Real like empathic tendencies are a fascinating notion to explore. An empathic person can't be confused with a sympathetic one. They (we) basically have to exist in codependent states in some form or another. And I wonder if we can find this in Marina Sirtis's upcoming performances even as Troi gets kind of lost in the shuffle.

I'm a bit of a fan of time loop episodes myself - good essay Josh, thanks.