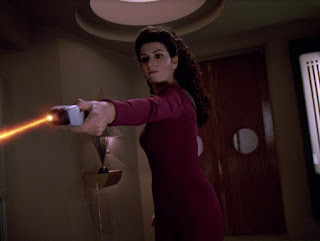 OK, OK, we'll cut to the chase. No-one is pretending “Power Play” is anything other than a rollicking action show. There's really not a whole lot more under the surface here than that. But damn is it ever a good one. Michael Piller seemed to think this was a hollow, empty and effectively mediocre outing, but even if it's not as openly provocative as Star Trek: The Next Generation can get on its best days, that doesn't mean there isn't a whole lot to love in “Power Play”.

The first obvious thing to say about it is that it's plainly an actor showcase episode, and it's very probably the best damn actor showcase episode this show ever does. It takes three of the best talents out of an already preternaturally talented cast, Marina Sirtis, Brent Spiner and Colm Meaney (and with the utmost respect to the other actors, all of whom I deeply adore, they are) and just lets them run completely wild for 45 minutes: Because of them (as well as the episode's ample direction that works seamlessly with them), this never for one moment stops being positively gripping. Marina Sirtis is obviously the biggest draw here, and this is the moment she's finally, at long, long last, allowed to come into her own and show us what she's truly capable of. Now she finally has the chance to play the imperious hardass she's always wanted to, and she absolutely owns and relishes every ounce and every second of it. As much as Marina Sirtis will say she appreciated and respected Deanna Troi's empathy as a virtue and as an acting challenge, there's just no way she's not having a total blast here. We're frankly sorry when it's all over.

Colm Meaney gets to show off his range a little differently. His character starts off more of the muscle of the team and he's perfectly capable of playing a hardened hired thug archetype, but the scripts give him these little moments where Miles' personality starts to reassert itself a bit, possibly because it's his technical know-how that's crucial to the convicts' plot. This I suppose makes him probably the most interesting of the three from a character development standpoint, and Meaney's good at working his material so the little flashes of Miles come across as warped, twisted distortions rather than moments of actual sympathy: Even though he may superficially appear to have more dimensions than his co-conspirators, he's still very much a hardened heel and we're meant to never lose site of that. Brent Spiner, meanwhile, is just absolutely fucking terrifying: He's back in his element playing a psychopath, but this is still a true challenge for him, as he has to make sure his character here isn't too reminiscent of Lore (something Spiner often admits and comments on when talking about this episode). Of course, he succeeds well beyond the point of comfort.

As much as this is unquestionably Sirtis, Spiner and Meaney's hour, the rest of the cast do get some important bits. This is another really strong ensemble piece with everyone working together to avert the crisis in ten forward, with Captain Picard, Commander Riker, Doctor Crusher, Worf, Geordi and Laren all contributing something of value. Hearteningly I'm finding it trivial and unnecessary to point that out: Even less than a year ago it was something of a rare treat to see everyone in the main cast given such equal and even-handed treatment, but this year it's become the norm to such an extent it's not even noteworthy to mention anymore, and that's wonderful to see (one of the best ensemble pieces is coming in just a few weeks, in fact). Keiko O'Brien once again gets stuck with a pretty stock and stereotypical wife role, but Rosalind Chao sells it with perfect conviction as always. But among the remainder, I actually have to say my favourite scenes are part of the brief subplot Geordi and Laren share as they try to set up the technobabble pain drill force field thing to ensnare the convicts in the rafters, although some of you might not be terribly surprised to hear me say that.

I unabashedly, unapologetically ship Geordi and Laren, and while I'll plead my case more in the obvious episode, I argue “Power Play” gives us the first little hints of where that relationship is about to go (and where it should have gone). It's not much, of course, but the few exchanges they did have definitely got me to take notice: I love that they're on the same wavelength about the plan from the beginning, with her suggesting a plasma pulse and him immediately picking up on that and thinking of an engineering solution for the delivery device-This sets Laren up as someone who understands lateral thinking and the Enterprise's inner workings (which are basically the same thing anyway) just as well as Geordi. I also love how they gripe to each other in the access shafts about starship designers' conceptions of “easy access”, and I love how Geordi is the first one to comfort Laren as she slowly grows more frustrated with the constant setbacks and failures that she's clearly internalizing and blaming herself for.

LeVar Burton and Michelle Forbes have instant chemistry with each other that's quite frankly above and beyond anything Forbes has with anyone else in the cast (except perhaps Whoopi Goldberg), including Jonathan Frakes. I also feel it's the perfect extension and realisation of the roles both their characters always should have been playing, but I'm getting ahead of myself.

Then there is the fascinating potential hinted at with the jat'yIn and the false backstory given by the entity possessing Deanna's body. I know it turns out to be a ruse, but it's an incredibly intriguing one nonetheless: The concept of consciousness living on as part of the latent energy fields and magnetosphere of a planet is tantalizing to say the least. It's an overtly, openly animist way of conceptualizing reality that Star Trek: The Next Generation hasn't really done before (at least not since “Haven”) and this might be the boldest and most spiritually out-there Star Trek *itself* has ever been, except for maybe some odd bits of interesting stuff in the 1970s. And even the final “reveal” about what the entities are doesn't totally discount this: They still exist as a part of the ionic storm. You can read this as a more-or-less straightforward (if rote) demonic possession story, but it might be more rewarding to think in terms of aggressively territorial nature spirits here instead, especially given “Deanna's” last line: “I warn you, Picard, not to pass our way again”.

What this all adds up to is something that is, by my count, yet another high-water mark. No, it's not as overtly “deep” and “serious” as some other stories, but “Power Play” remains deceptively intelligent in its own way. It's quite frankly an insult and a dismissal to call this middling: If nothing else, it's some of the most intense and supercharged fun you can have with Star Trek: The Next Generation. Share on Twitter Share on Facebook

I feel like as these progress there'll be a constant theme of Michelle Forbes' chemistry with the existing cast. Even as I could see her being a match for Riker last episode, I suspect once I sit down and watch Power Play tonight I'll be on the same ship-train as you. But it's key that every time she plays off a new core castmember, she feels integral - she feels like she's filling a niche that was missing.

And of course, it's because she is. She's filling the void left in Tasha's absence, that's essentially been a sucking chest wound for five years. Albeit, filling that hole and expanding it and doing it somewhat better, with more agency, gusto, and better writing. But so it goes.

Another example of Season 5 giving us "Peak TNG". This episodes use of Keiko and Miles essentially does what last episode forgot to do - remembers that there's families on the Enterprise, and uses them as the prime example of what happens when all the space magick comes along.

And this is some pure space magick, too. Demonic possession, lies upon lies, a literalized Planet Hell. We're finally back in immram or echtra territory. Actually a pretty great place for an empathic princess and a working class space Irishman to have a bad brush with the Otherworld.

I'm quite eager to give this a watch specifically for the Burton, Forbes and Frakes performances, to see how the archetropes of teacher/heart of the ship and best friend/soul of the ship play with the fact that their closest BFFs are the ones taken over and violated by hostile aliens. Or to glean a little guilt in Frakes' performance, since as I recall his injury this episode is the thing that prevents his possession, right?

Things to look out for.

It was all there, I'm pleased to say, though because of the pace and urgency of the action events of the episode, nobody got much time to deal with their inner lives, and then poof, crisis over, back to normal, episodic storytelling.

One thing I chuckled at was the sheer size of the device Geordi and Laren were lugging around. It's what can only be considered something of "retrograde futuristic", because nowadays the device used or attempted would be the size of a cellphone, with maybe a fiber-optic cable attached to it.

Back & catching up after holidays and working away from home for the summer. So looking forwards to the posts from you to catch up on Josh!

This is one of my fave episodes so thanks for highlighting what's great about it - and I ship Geordi and Ro too! What a good pairing.