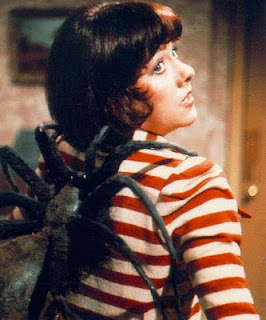 I have the thing pretty plotted out, you know. I mean, there's a lot of episodes I haven't seen in a long time and things I know I'll discover. But on the other hand, I know my Doctor Who well enough to know some of the major beats and points. I know what's going to be in some of the entries. There are parts I could write right now, today, without rewatching the episodes. One thing that will eventually happen with the blog, as you can probably imagine, is that as the show develops, multiple senses of what it is are going to come into play. And eventually, one of those senses...

Well, let me show you. Let me just quickly write one of the bits I know how goes. This is going to be the start of the entry on Planet of Spiders:

It's mid-September, 1992. The Shamen are at number one with "Ebeneezer Goode." At least, in the UK. In the US, somewhat less fortunately, "End of the Road" by Boyz II Men is at number one. As it was for three months that year. Perhaps more importantly, at least for our purposes, in a small town in Western Connecticut, a newly minted ten year old flips through a book he just got from a family friend a week or so after his birthday. By a man he's never heard of called John Nathan-Turner, about a television show he's vaguely heard of called Doctor Who, the book is called The Companions. After the friend leaves, and it is no longer rude to do so, he asks his mother what this Doctor Who thing is. She looks around in a drawer, and hands him a VHS tape, which he goes to the basement to watch. The Delia Derbyshire theme, familiar to so many people, plays, and something called Planet of Spiders comes on. And so, in the wrong country, in the wrong decade, but every inch at the right time, I became a Doctor Who fan.

And I figured that, a few months after that, in one of those standard wrap-up entries where we say goodbye to a regular, I'd get to talk about all of this. That at that point, when one of the things the blog is about is my experiences of Doctor Who, and how one of the things it is - not the most important at all, but one of them, is how it is the story of one little boy growing up and realizing who it was he wanted to be. I assumed, because that is what you assume, that then, and in the entries that follow that (and of course, some of those that precede it) I could talk about the extraordinary character that is Sarah Jane Smith. I had the whole Hand of Fear entry for that - a story designed around the knowledge that it was the character's departure, and that tortured the audience by putting her into mortal peril over and over again, threatening us with the absolutely unthinkable.

As if Sarah Jane Smith could ever die.

I won't lie and say Sarah Jane was my favorite companion. She wasn't, and never has been. Well, I mean, I suppose she was for a bit in there, because all I had access to were basically random third and fifth Doctor episodes, and she won out over those companions handily. But once I got to know the whole series, Romana and Ace and now Amy edged her out. But she was my first companion, and I loved her, and in time, I've always known I'd celebrate that fact here. In time. I had time. Lis Sladen was young, and still the leading woman on a successful television show in her own right. She was going to be around for years to come. I had plenty of time to gather my thoughts and give an incredible woman the tribute she deserved.

I don't usually cry at celebrity deaths. People I cared about. People I respected. I've written eulogies for great men and great women without shedding a tear. So I suppose it must just be some glitch that's making my computer screen all blurry. And the rest of the world blurry too, for that matter. And my face wet. Some sort of glitch.

I could say all of the obvious things. That she was the first truly feminist companion. That she was literally, genuinely, an inspiration to a generation of little girls. That she taught them that girls could have amazing adventures and be brilliant. That she taught them that a girl could stand up to any boy on the planet, or, for that matter, any one off of it. That there was such a thing as a girl even the Doctor looked up to.

I could talk about how last week, my sister and I introduced a ten year old son of a family friend to Doctor Who, giving him a DVD set of Matt Smith's first season. How he, much like me twenty years earlier, didn't know what it was, but sat down with it and, less than 24 hours after he watched The Eleventh Hour, had caught up on the show. How we got him Season 2 of the new series, and just yesterday he watched School Reunion, and met Sarah Jane Smith. At the same age I did.

I could talk about what that means. About how important it is that there's a TV show that's clever and funny and exciting and that teaches people not only that it's OK to be clever, but that clever people have more fun.

I could talk about her other appearances on Doctor Who. How it's her farewell to Tennant in The End of Time Part 2 that is the most heartbreaking, more than any other scene in that segment. How, with twelve seconds of screen time and no line besides "What? What is it," she manages to convey nearly 40 years of emotion and character and love for the Doctor, and more to the point, for Doctor Who, for all that it was, is, and will be. I could ask who would have thought an actress who'd only worked sporadically since leaving the show some thirty years ago could come back and do that.

I could ask that. But the answer is obvious. Anyone who ever saw an episode with Lis Sladen in it. That's who. Perhaps her banter wasn't as fun as Lala Ward's. Perhaps her anarchic pluck wasn't as flashy as Sophie Aldred's. And perhaps nobody ever wrote her a scene as good as Karen Gillan got with Amy Pond's wedding. But if you look under the feet of any of them, or of any woman to stride through the doors of that silly little blue box in the last thirty-five years, you'll see the shoulders of a giant, and that giant's name was Elisabeth Sladen.

Doctor Who is the show that can run forever. And there's going to be a long list of amazing women standing on those shoulders yet.

I was hoping you'd write something today and I knew it would be everything I'd wanted to express. But more, you also managed to balance the sadness with positivity by including in it your own personal 'back story'. A friend and fellow Whovian rang me last night to tell me Lis Sladen had died and I haven't stopped thinking about her since. It's like I'm mourning two people - the actress, Elisabeth Sladen and the character, Sarah Jane Smith. Because unlike the Doctor she can't regenerate. There will be no more Sarah Jane Adventures (on TV at least). No-one could take on that role because Lis WAS Sarah Jane Smith. Note her surname - SMITH. disregard all that River Song/Mrs. Pond palaver there's only one woman who could have been the Doctor's wife and now she's dead. thankyou Philip for sharing your story about her.

Thanks for writing this.

Over a year later and it still hasn't gotten any easier to accept that she's gone. I'd say something here, but you've said damn near anything I could say, and said it better. Thank you.

How much of The Sarah Jane Adventures will you be covering when you talk about the new series? The series in general deserves at least an entry, and I can see reason to discuss each of the stories where the Doctor appears (The Wedding of Sarah Jane Smith and Death of the Doctor) in their own separate entries since, in a way, they are as much part of the Doctor's story as any of the novelizations and audio stories.

And I share your sorrow. It was hard watching SJA knowing that it ended as a result of her death. After the final moment of the series, I found myself unable to hold back tears. To borrow from a much better writer than myself (aka Joss Whedon), "I wish that Liz Sladen didn't die... because she was nice, and now we all hurt."

Hey. I normally abhor necroposting, but yeah, I've got something I need to to say here. In my life I've had things I wished I could have done, and one of these was meeting Elizabeth Sladen and thanking her for introducing me to Doctor Who. The very first scene of Doctor Who I ever saw was Sarah Jane Smith dressed in a brown flared pantsuit stepping out of the Tardis and encountering a 10th-12 century bowman attempting an assassination. Yeah, my first doctor was John Pertwee, my first companion was Sarah Jane Smith, and my first Alien was the Sontatans. No wonder I became an instant fan. When I first encountered "regeneration" I kept watching because even though the Doctor had changed (into something I initially despised [yes, I know it was Tom Baker, but he's a total a***ole in robot]), I could rely on Sarah to provide continuity. Let's face it she had some horrible scripts that relied on her doing stupid things and screaming, but dammit she could make it believable. The first moment I said "No how can this still be Doctor Who" wasn't when the doctor regenerated, it was when Sarah left. Vale Elizabeth Sladen, you were a subtle and better actress than any of your roles required,