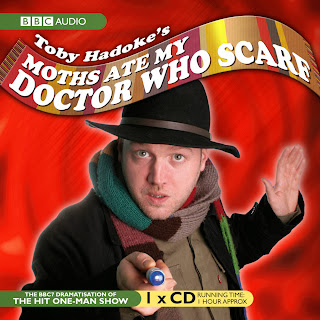 Abigail Brady will get the sole power to decide if you ever get to see me play Soldeed. She is also responsible for starting the entire Chelsea Manning feud on Wikipedia by moving the article to its correct title. Beyond that, she's invaluable for checking random facts about London for various projects and is an Iron Man villain. She also happily stepped in for a guest post on short notice. She is, in short, one of the five greatest people never to be Verity Lambert.

Now, I know what you’re thinking: what’s the connection between Phonogram and Moths Ate My Doctor Who Scarf  other than on November 17th, 2013 I went straight from seeing a panel discussion containing the writer of the first to a performance of the second?  After all, one is a comic taking an adult perspective on the someone from the middle of nowhere in the West Midlands’ teenage obsession, whereas the other... is the exact same thing but in plural. 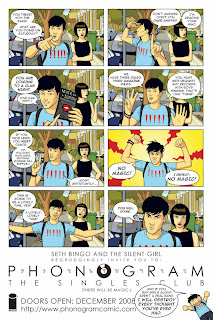 If you're covering this is it too much to hope that Nebulous will get a look in...?

I enjoyed Phonogram but, not being very familiar with the indie music scene, understood maybe one in ten of the references.

Which, if nothing else, was very good at developing empathy for what it must have been like for most people to watch Doctor Who for large parts of the 1980s.

I love love love Phonogram. It's a lovingly-written, beautifully illustrated pair of series.
I also didn't know many of the references (I'm a little bit older and a lot more American than David Kohl), but I've experienced the same transformation of my reality from Sonic Youth and Pere Ubu that the Phonogram characters get from Kenickie and Manic Street Preachers.

This is lovely! Thanks for stepping in. You've sold me on Phonogram (and also on digging out my Kenickie), and unfortunately unsold me on finally getting around to checking out Hadoke's shows. I adore Running Through Corridors and Hadoke seems like a nice enough bloke in interviews, but something always made me think I didn't want to see his show. I didn't quite imagine what you describe would be that something, but here we are.

You've also reminded me that it's been far too long since I've watched Spice World, which as we know reveals that the band were managed by the Great Intelligence. And also includes Jennifer Saunders.

Before reading this, I had no idea that Phonogram existed. So it looks like another new book is going on the list. Abigail's thoughts about Hadoke's shows are very intriguing as well. I haven't had the opportunity to see his stage shows, what with their taking place on the opposite side of a rather large ocean to me, but like Encyclops, something about Hadoke has always bugged me in the few times that I have seen him in Doctor Who related material.

It seems he embodies the same traits about Doctor Who fandom of a particular kind that Phil quite roundly critiqued in his essays covering the 1980s. There's an alienating exclusivity to some aspects of Doctor Who fandom, the presumption that the trivial details about the stories are the best part, that the spectacle of the monsters and the trivia is what makes Doctor Who good. But just as Abigail points out, if you focus on the trivial details of a cultural property, then any cultural property of the same kind can serve the relevant function for yourself. Hadoke's Doctor Who fandom is no different from that of a fan of Star Wars, Star Trek, Lord of the Rings, or you name what else major franchise you want. There's a hostility to new entrants because they don't already know everything, and a hostility to female fans for reasons I've never been able to comprehend completely. I'm glad to share fandom of Doctor Who with Hadoke, but I don't know that Hadoke would necessarily like my approach to being a fan. Indeed, his approach seems quite opposed to the perspectives of the fans who currently run the show.

See, this is what happens when you jump into someone's time scar and are spread across all the days of their life in various avatar forms.

By the way, has everyone checked out the Google Doodle on google.co.uk today?

It's fantastic, isn't it? Though as I've said elsewhere, the gleefully smiling Ninth Doctor is a bit unsettling.

I enjoy the fact that whoever did it is a Big Finish fan as they knew enough to give the Sixth Doctor a blue coat.

In fairness it kept the audience entertained and heart-warmed. It was only during the second show that I started to think "hang on, I can see what he's doing here; this is actually quite mean."

I think the exigencies of doing a standup routine that will be accessible and funny to the pissed-up man on the street who may or may not have watched an episode of Doctor Who once *probably* prevent him from doing the perfect, enlightened investigation into what it means to be a fan.

i love to play mini miltia on android