I Can Lock All My Doors (Super Mario Kart) 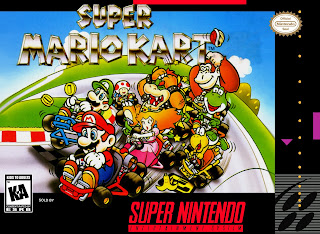 I remember, in January 1993, asking my younger brother to pick up a copy of this as he was going shopping. And this is particularly memorable as I also recall him coming home with the worlds most stupid trousers. The size of an airship and with each leg in 2 different colours. He was the Sixth Doctor of rave culture.

Console games almost completely passed me by. I was a Commodore PET child, and as such learned to play computer games with a keyboard, and indeed to examine the code therein. Again, though, solitary pursuit. A keyboard does not really facilitate multiplayer experiences.

We did get an Atari 2600 when it came out, but the graphics were so horrible in comparison to arcade games that I just as soon go to the arcade and spend gobs of quarter than sit in front of ghostly Mondrianish blocks flitting about on a crappy TV set. So I got used to controllers and buttons mounted on an immovable object. And so now I completely suck at console games, with their handheld controllers filthy with buttons.

I actually prefer "in-person" games when it comes to multiplayer -- games like Scrabble (a particular family variation I'll write about some time) or Pinochole.

TRS-80 child myself. My parents got me a Snes for Christmas '93, after seeing how deeply I dug Super Mario World on a visit to friends whose kid had a Snes, but it stayed home when I went off to college, and I eventually sold it to a used-game store.

I think this is the first time I've recognized a title quote without even needing to think about Googling. It's the only way to live.

While I'm here, I want to shill for one of my favorite current alternatehistory.com threads, and one relevant to the Project: Player Two Start, a history of the SNES-CD and the butterflies it launched. It's particularly relevant to this post in that the that-timeline version of SMK was the SNES-CD launch pack-in.

This was probably the game I played most frequently on my sisters SNES, before it got handed down to me. As you say, because of the joys of the multiplayer, since I was, by definition, playing it with her. I was fairly terrible at it, at least by comparision, but it was so much fun, especially on the rare occasions I managed to beat her.

But yes, later versions are a great improvement.

Oh, also, this was the first time I realised Donkey Kong was part of the Mario family, and that Mario's presence in some LCD Donkey Kong game my uncle owned wasn't some weird cross-promotional thing.