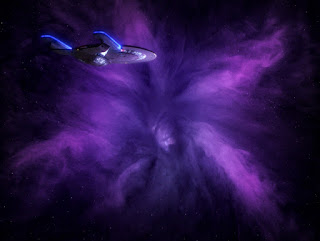 For some reason, the Warp 5 speed limit is a concept that really stuck with me. I have no idea why, it's no less outlandish then some of the other artificially out-there concepts this franchise plays with on occasion, but for some reason this one connected with me. When rewatching Star Trek: The Next Generation's earlier years back in the day I would *always* self-correct whenever Captain Picard had the Enterprise go somewhere at over Warp 5: “Well, they didn't know any better at the time”, I kept telling myself. For some reason. Because, famously, this is a plot thread that is pretty swiftly abandoned and the speed limit is a rule that has more exceptions and gets broken more frequently than the Prime Directive. I would always let this one through in my personal headcanon, even though I didn't particularly enjoy watching it, because to me it introduced a critical piece of worldbuilding: A “Datalore” for the latter years.

Except it's not critical. At all. The warp speed limit is only mentioned I think like three other times, so I have absolutely no idea why this struck me as such an important piece of Star Trek universe worldbuilding. I can tell you why I think it's important to talk about today though: “Force of Nature” is attempting, albeit clunkily and embarrassingly, to address environmentalist issues, which don't get considered anywhere remotely near as much as they should. Environmentalism is a fundamental part of my political philosophy because I believe in a holistic utopianism that would reunite all forms of life energy in the universe. Connection to our land is an extension of empathy, of course, and perhaps the highest form of it because at that stage you've finally shed all the artificial boundaries you have erected between the self and the perceived other. A great deal of my most formative intellectual background is actually in the fields of zoology, ethology and natural history (my interest in genre fiction media studies is honestly a kind of aberration, albeit a big one) and I'm a big supporter of Donna Haraway's conception of ecofeminism and multispecies ethnography, although that's best saved for a look in a specific essay down the road a bit.

(Apart from the weird warp speed limit thing, as I looked at "Force of Nature" this time some of the effects shots with the space rift and scenes with Data and Geordi in the Jeffries tubes felt familiar to me: This may have been an episode I saw way back when, or it's at least a part of the same landscape of visual memory.)

It's important that Star Trek: The Next Generation adopt ecology and environmentalism as part of itself, but sadly, the way “Force of Nature” goes about doing it is fairly terrible. First of all, it's a story about ecoterrorists, and though it absolutely tries to be sympathetic to them (apparently writer Naren Shankar attended an activist rally in Hollywood for research and, in Jeri Taylor's words, “came back galvanized” about how to crack the pitch), it makes the critical mistake of putting them in dramatic opposition to the Enterprise crew. The problem with this is that it goes against the way Star Trek: The Next Generation is supposed to work in a number of key ways. Put most crudely, the Enterprise crew ought to be fairly right-on politically for their universe: If anything, *they* should be the ecoterrorists and, rather than having a crisis of consciousness over it, someone like Geordi should have been the first person to spot any potential harmful side effects on the space-time continuum caused by warp drive. Having the ship get hijacked and needing to be lectured by a bunch of sanctimonious asshats makes the Enterprise crew look codgy and out-of-touch, and doesn't do a great job painting environmentalists in the best of lights either.

(And the title is even a misnomer: There's no real “Force of Nature” here to come in and set the universe straight. That would be too much like Dirty Pair.)

The other problem, from my perspective, is that this poses a problem for my experiment to compare Star Trek: The Next Generation's voyaging starship motif to Polynesian wayfinding. Because the voyaging canoe is meant to be an ecosystem unto itself: The way everyone plays an important role onboard and the non-invasive methods of shipbuilding and navigation are all meant to reflect a certain environmental fragility while at the same time promoting a harmonious unity: Given that Polynesia is a culture spread across tiny islands in the biggest ocean on the planet, its people have always known that resources are by definition finite and scarce and that the natural world must be respected and treated with care. The canoe represents the island, just as the island represents the Earth: That's the message the Hōkūleʻa and the Polynesian Voyaging Society currently sail to promote. Or rather one of them, the other being a campaign to call attention to and pay tributes to indigenous people and indigenous knowledge.

As I've mentioned here before, I think a disconnect from the land is a very Western phenomenon that's a consequence of modernity's long heritage of imperialism and colonialism. It's something a lot of people need to be re-educated about. And yet I also believe voyaging is a great way to reconnect: I don't think you necessarily need to be born in a certain place to be connected to it (if anything Westernism proves that), so long as your travels through life and around the world are done with a sense of mindfulness, awareness and empathy. There's no better example than nomadic or seminomadic hunter-gatherers, who live simple, elegant subsistence lives as they migrate from place to place (indeed, the settling of Polynesia has been described as the greatest migration in human history). And this is also, I think, something Star Trek did once understand.

Cast your memory all the way back to “In Thy Image”. Do you remember how Alan Dean Foster depicted San Fransisco? For him, it was to be this surreal utopia where futuristic architecture wove itself around the natural surroundings, and children interacted freely with cheetahs. This was even something (some of) the creators of Star Trek: The Next Generation were especially mindful of: Everything about the Galaxy-class Enterprise was built with natural harmony in mind, from the organic curves of the ship itself to the accessibility built into the interior design. What this means is that were Star Trek: The Next Generation to do environmentalism properly, it would be a utopian proof-by-negative: We wouldn't need to do a story about this sort of thing because the idealistic themes the show was trying to be convey would be imbued within the setting itself. That's also a classic science fiction trope, the very same one that makes science fiction so ideally suited to be paired with abstract art and avant-garde cinema.

And that gets at the other big problem with “Force of Nature”. It has the same problem as “Melora” in that its trying to Say Something Important about a Hot Button Issue and in the process forgetting to actually be utopian. The only difference is that “Melora” is kind of good in spite of that and “Force of Nature” kind of isn't. The catch-22 is outlined very well by Shankar himself in Star Trek: The Next Generation 365:

“It's a cautionary tale on why you should not let an issue drive a story. We were trying to talk about the environment. When you start from an inherently nondramatic premise and try to craft a nondramatic premise onto a message, it hardly ever ends up well.”

And you know what? Shankar is absolutely right. The only thing is, he's right on more levels than perhaps even he realises, and this has some fairly serious repercussions. What this does is effectively scuttle the entire premise of Star Trek as conceived by Gene Roddenberry, that is an episodic series of morality plays in a science fiction setting. This is the final, definitive proof that “Issues” stories of the sort that have been Star Trek's signature since day one simply do not work, and indeed have never worked. Which is all well and good as my esteemed readership and I figured that out roughly around 1966, but what concerns me now is that I'm not sure either this creative team or the one on Star Trek: Deep Space Nine has any ideas besides this.

"I don't think you necessarily need to be born in a certain place to be connected to it (if anything Westernism proves that), so long as your travels through life and around the world are done with a sense of mindfulness, awareness and empathy."

What a great article Josh, thanks, and an interesting development on themes touched on in your ideas in 'Cardassians'. I agree *so much" with the idea that if we are working from the premise that The Next Generation is utopian, then there's no way this story should happen. And surely the writers could have found another way of depicting those affected by the warp drive other than as terrorists?

I like that you bring up the canoe as both a vehicle for travelling and as representing the ecosystem too - as within Welsh and British myths, there is an analogue within the 'Spoils of Annwn', where Arthur travels in ships to the Otherworld, Annwn, seeking the magical Cauldron of Annwn. The part that relates to your text though, is that Arthur's own ship is called Prydwen, which has too been seen to represent the land itself, a Goddess and the island of Prydain, or Britain later, as a whole.

I love the image of the island I live on being a ship, a Goddess entity, which one can journey in, even to the Otherworld.

Empathy as you say is key, and it seems that the writers here have pictured the Enterprise crew as having very little as they have apparently been journeying through many spaces completely unaware.