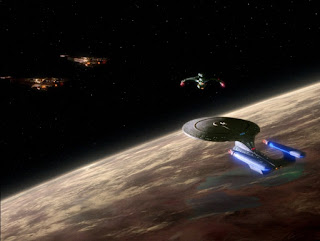 “The Chase” is definitive Star Trek: The Next Generation for me. It's one of those episodes I find truly iconic, everything I want this show to be and one of the first stories that comes to mind whenever I think of it in passing. There's quite a lot of those this year.

And yet I'm finding it hard to come up with things to say about it that aren't obvious. I guess I'll address the only real potential criticism I can think of straight away: The von Dänikenism stuff at the end is a little bit iffy and arguably anthropocentric, even if it does fit into the continuity of the established Star Trek universe without incident. But that's sort of the problem with this kind of writing, isn't it? Science fiction writers can focus on details like world-building minutiae and miss the larger social implications of their work. It must be said, however, that Ron Moore and Joe Menosky cite Carl Sagan's Contact rather than Chariots of the Gods? and “The Chase” does provide the interesting wrinkle that the protohumanoids were responsible not for the cultures and religions of the species they gave birth to, but to existence itself, theirs being the only intelligent life in that part of the galaxy (and I like the stipulation “this part of the galaxy” because it hedges against the common sci-fi tendency to downplay the immense size of the observable universe: Maybe intelligent life evolved in other forms elsewhere in the universe. Maybe even in our galaxy, like, say, on the other side of that wormhole near Bajor).

I also adore the protohumanoid's speech: It's such a beautiful and fitting Star Trek message delivered with warmth and conviction by Salome Jens. And from a Vaka Rangi perspective, it's even more appropriate: Cherish and respect life, because we are all living beings bound together by consciousness. And it's entirely fitting that this is a message we hear at the conclusion of a vast, galaxy-hopping adventure (and it's a testament to how much progress we've made this year that I don't even feel the need to point out how well served the cast is, with everyone getting to show off their skills in an effective and memorable way to help solve the puzzle): It's a perfectly effective Star Trek metaphor for the very things we voyage to understand.

Jens' one-scene wonder also showcases what an absolutely killer week this is for guest stars: Apart from her, Norman Lloyd is absolutely wonderful as Captain Picard's old archeology professor and mentor, and he brings a lovely and moving bittersweetness to every scene he's in. Just in passing, Professor Galen's subplot with Captain Picard is a naturalistically flawless demonstration of what's become such a hallmark of this series: An examination of your life guided by awareness, and acceptance, of the weight of your past on your present self. Jean-Luc's words to Beverly about the weight of the past resonated particularly with me: I think it's the best depiction of this theme in the season, and one of the best in the whole series. Galen even provides us with another barbed critique of Starfleet and what stands for: The Professor's stinging indictment of the Federation as a “dull and bloated empire” and Picard's role as “a centurion off patrolling the provinces” is absolutely devestating...But so is Jean-Luc's contention that he wouldn't trade being an explorer for anything.

Then there's Linda Thorson's Gul Ocett, the first adult female Cardassian we've seen in Star Trek: The Next Generation/Star Trek: Deep Space Nine, and the only female Gul we'll ever see. She's a delightfully commanding presence with an incredibly striking style, but the even in spite of all that the standout for me this week is and has always been John Cothran, Jr.'s positively amazing Captain Nu'Daq. I absolutely love this guy and always have: I'll always vividly remember his look, his bombastic inflections and the way he goes around calling everyone a dishounrable Topah, whatever that means. Frankly, he's probably my favourite Klingon character in all of Star Trek and just about the codifying example of the Klingon warrior character archetype-For my money simply one of the all-time greatest prosthetics guest stars in the show's history.

Captain Nu'Daq also leads me to an interesting point, however. One thing that caught my attention on this rewatch was how actually untrustworthy the Klingons are portrayed here. For one thing, they're paralleled with the notoriously devious Cardassians as another “rival faction” for the Enterprise to compete with for Professor Galen's puzzle, but Nu'Daq even tells us that he's initially unwilling to share what his team have found with his Federation allies, leading to that brilliant scene where Nu'Daq tries to bribe Data (and you couldn't have asked for a better showcase for Brent Spiner's comic relief approach to Data's character than that scene, especially getting to act opposite a performance like John Cothran, Jr.'s). Taken on its own this is an interesting way for Star Trek: The Next Generation to depict the Klingons, at least after “Redemption”: One thing that's easily forgotten in the general knowledge that the Klingons and the Federation are allies in the 24th century is that the alliance was depicted as far cooler and shakier prior to “Redemption” and there was a lot of uncertainty and distrust of the Klingons in those earlier episodes, especially in stories like “Heart of Glory” and “A Matter of Honor”.

But in the wake of “Aquiel” this is even more interesting, because there the Klingons were used explicitly as red herring antagonists. So this is two stories in the same season that seem to walk back the post-Gowron affable familiarity between our heroes and the Klingon Empire. It's also interesting to see them paralleled with the Cardassians here, because in a little under a year we're going to be seeing the galaxy positively lit up by bloodthirsty warmongering and unreconstructed imperialism from both of them, with our heroes caught in the middle. Future hindsight aside, it's also a provocative idea to link the Klingons and the Cardassians in this story following “Face of the Enemy” and the eleventh-hour reveal of the Romulan investment in the search. Because in the denouement, it's the Romulan commander who contacts Captain Picard with that lovely speech about how we're all “not so different as we might think”.

I think it's wonderful that the story gives that scene to the Romulans. It could just as easily have gone to Nu'Daq, our Klingon ally, or Ocett, as the Cardassians were originally conceived of as antagonists who could debate our heroes as equals, something it was thought the Romulans could no longer do. But as I said, we're in a post-“Face of the Enemy” world now, and the Romulans have reclaimed a lot of their earlier symbolism because of that. Furthermore, it calls back to Galen's indictment of the Federation at the other end of the episode and sets up an interesting schism that is potentially starting to develop: On one side are the Klingons and The Cardassians, perhaps foreshadowing their looming confrontation with one another, a conflict born of the fact they're both too proud, stubborn and quick-tempered to admit how similar they are to each other. In the original draft of the script the Ferengi were supposed to be involved as well, and you can hypothetically imagine them being on this side too. Meanwhile on the other side are the Federation and the Romulans, who have always been designed as compliments. No, that's not the way it plays out in the plot diegetically, but thematically this is the arrangement that seems to be speaking to me here.

After all, as the story takes care to point out, its the things we share with other life, our inner and fundamental humanity, that's the best hope for progress we have. That's just empathy, and it's not an anthropocentric platitude because our humanity is bound up with life and consciousness, and life and consciousness is everything. Nobody is better poised to understand that better than the Enterprise crew and Romulus. We really are more similar than not, especially our best sides.
Share on Twitter Share on Facebook

The Romulan commander played by Maurice Roëves of course, a very fine actor.

I don't have much to add to The Chase. I like it more and more as the years go by. I've never been fond of these sorts of progenitor/intelligent design concepts, but the less I think of Star Trek as a table-top game map with unique worlds with their own isolated growth and warlike expansion, and more as just reflections on our common humanity among allegorical fantasy races, the more something like The Chase draws me in. Of course, the progenitors also call to my mind other archetypal "the first beings in the universe" characters, like the Maltusians & Oans and Guardians of the Universe of comics, or the Nibblonians from Futurama.

Anywho, the politicking of the disparate treasure hunters so perfectly encapsulates the current state of the Trek universe. The exploration of Jean-Luc's archaeology interest is organically and well folded into an actual Enterprise adventure rather than his going off on his own. Beverly is in complete Life Sciences mastery mode here. The rest of the crew deftly balancing the needs of the Captain, with Riker and Worf's skilled use of the ruse, while Geordi and Data hand out the technobabble expertise and Troi makes certain Picard isn't violating his own moral compass.

Just rewatched this episode because Mark Watches hit it, and yes, the intelligent design/Von Daniken aspect is irksome but largely overshadowed by how good it is--and as K. Jones points out, it's a LOT more palatable if you read Trek aliens as allegorical fantasy races.

Which, I find it very interesting the Ferengi were considered for inclusion, because if they had been there, we would have had all the major standard fantasy races represented--Space Humans, Space Elves, Space Dwarves, Space Dragons, and Space Goblins.

And while I agree it's only possible post-"Face of the Enemy," looking at them that way shows how right this shift in the Romulans is. Of course the Space Dragons and Space Dwarves end up squabbling while the Space Humans and Space Elves find common ground! That just makes sense.

I've always loved that it's Salome Jenkins in this role, it makes her role in DS9 almost like an evil twin.