One Last Hurrah For The Fiftieth

Janna Hochberg contributes one last bit of festivity for the Fiftieth Anniversary.

Also, do remember that today is the last day of Eruditorum Press's post-holiday sale. 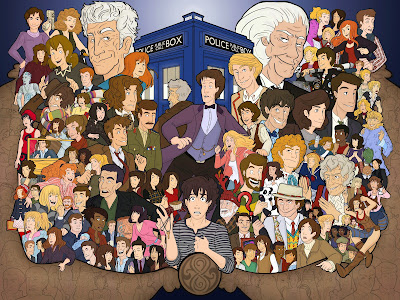 It took me a minute before I realized the giant head on the left was supposed to be Capaldi, not Pertwee. :-P

I'm stuck on several of these. Who's the gentleman in the necktie under Steven, to the left of the seventh Doctor and to Susan's right? How about the four immediately to the first Doctor's right (three blond, one pink)? The one between the third Doctor and Harriet Jones? And the three under the third Doctor's hands?

I think two of the three under the third Doctor's hands are the kids that Clara babysits.

I'll add my own cry of "great!" to the chorus. There are a number I don't recognise and I haven't spotted Victoria yet, but don't tell me - I'll keep looking! That's where the fun lies!

I think the gentleman in the necktie is Canton from Impossible Astronaut. The other person under the Third Doctor's hands is I think Christina from Planet of the Dead.
I think the pink person to the right of the First Doctor must be K'rizz from Big Finish. If there are Big Finish people in there as well I'd guess that the three blondes with K'rizz would be Charlie, Lucy and Molly. Would the brunette be Tamsin? They're all canonical if Night of the Doctor is. And we've definitely got Frobisher. So if Big Finish is allowed then the woman next to Harriet Jones could well be Evelyn Smythe.

I've spotted all the major television companions, except that I think Grace and Donna are to the left of the TARDIS and bottom left, but I'm not sure which way round. That leaves the woman above young Amelia, the two below Jackie (one might be Pete?), the one between Martha and Face of Boe, and the person at the end of Ace's baseball bat.

Oh, yeah - that was obvious! Happy New Year, everyone!

Is Benny in there somewhere? Is that Charlie and C'rizz in the top right corner? This is really really excellent, but it's driving me crazy that I don't recognise some faces and can't find others.

I'm hoping Benny is the blonde in the upper right with the loopy/hoopy earrings. She was always wearing those earrings on the Virgin covers!

"That leaves the woman above young Amelia"

I think it must be Idris/Sexy.

One might be Pete; I think the other is Chang Lee.

"the one between Martha and Face of Boe"

"and the person at the end of Ace's baseball bat."

Why am I doing the covers again?

Same reason I write the books: the massive pay package.

I do wish the artist would publish a key. The artwork is great but I'm having a hard time identifying people except by clothes. I assume that's Harry Sullivan driving Bessie, but I'm sure I don't remember him with an afro.

Good point! Also reminds me I need to email you tonight (not about the pay package though).

I'm guessing the person at the end of Ace's bat is Joan Redfern. If there's a Big Finish crowd next to Hartnell's head, I suppose the dark-haired woman is Erimem?

In this image, Clara is cleverly disguised as everybody.