Outside the Government: Torchwood: Children of Earth: Day Two 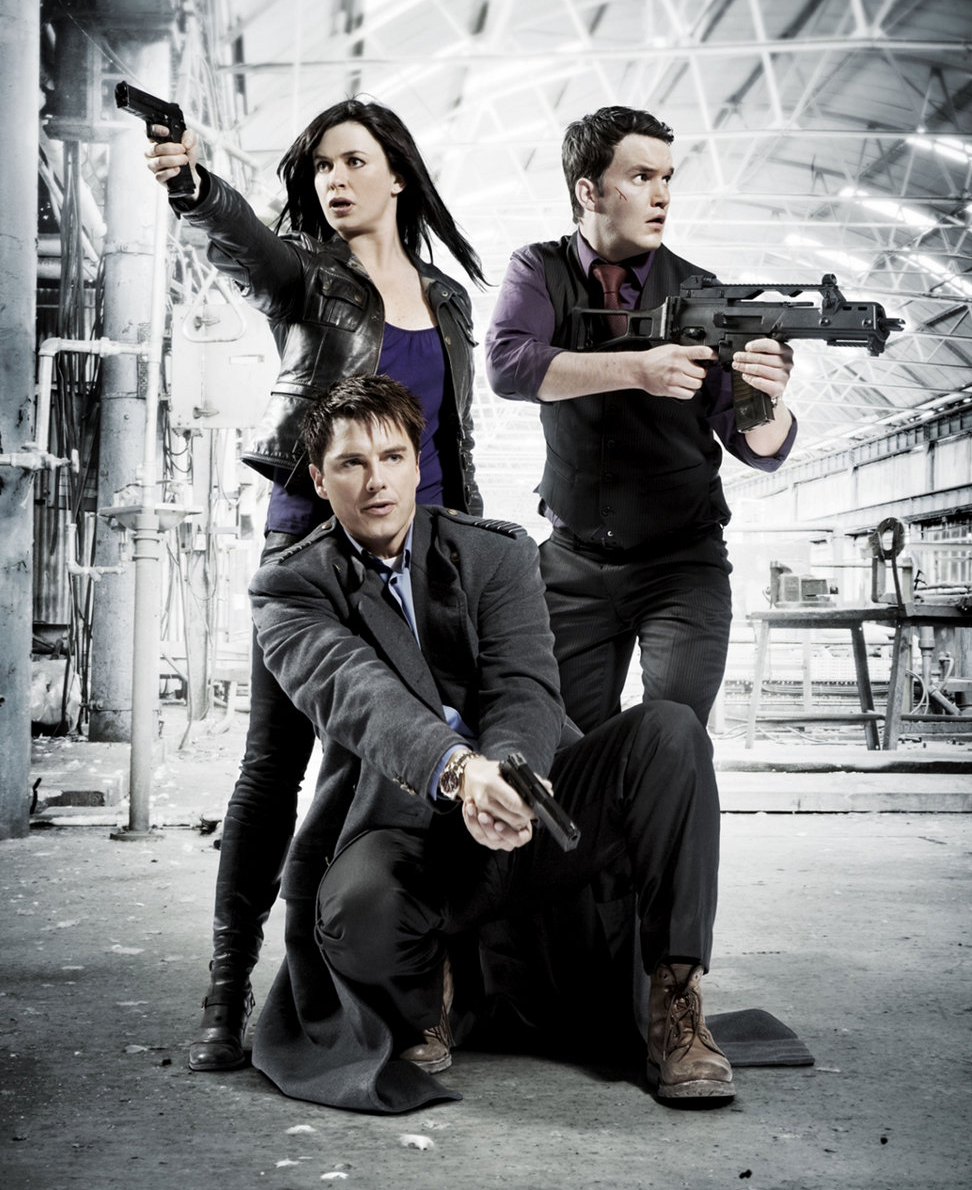 And so we get a world where there is no such thing as fun, and therefore the Doctor's given up on us. And to restore Doctor Who, we're going to have to sacrifice Torchwood...

Incidentally, I never bought that Riley was going to be the next PM, because I couldn't see how Green could be exposed without her being exposed as well. It'd be like if Cameron was forced to resign because horrible things were revealed about the education system, and was replaced by Michael Gove. We'd notice the disconnect.

I'm beginning to wonder if this is actually Gove's plan. It makes as much sense as his policies

"One cannot read Lois as a straight like-for-like replacement of Martha."

Along a similar vein (and, likewise, apologies if I'm pre-empting), my imagination gives out at trying to place Noel Clarke in Days Four and Five - as was originally intended until a scheduling snafu arose.

There's an interesting exchange in The Writer's Tale where Davies goes from being despondent about Clarke's loss to being invigorated by it in the space of a day - instantly devising a way for the story to shape around it. And to his credit, the story now shapes around it so perfectly that I can't even see the seem.

To me, Children of Earth is inseparable from The Christmas Invasion, wherein Harriet Jones asserts the right of Earth through its elected officials to defend itself from alien threats rather than simply hope that the Doctor will always show up in time. And for her presumption, the Time Lord Victorious destroys her career, thereby ushering in the completely amoral government of Children of Earth, which embraces truly monstrous policies when aliens far, far worse than the Sycorax show up and the Doctor never comes. I don't know how PM Harriet Jones would have responded to the 456, but I find it difficult to believe she would have sanctioned the sacrifice of an openly despised lower class.

“Think of the children” being a slogan that almost completely forecloses any possibility of actually doing so. “The children” are in the end a nebulously defined potential utopia severed from the lived experience of any actual people.

I cannot find the link to it, but I remember a study done about ten years ago which showed that poll respondents were, IIRC, 25% more likely to support a proposal -- ANY proposal, not matter what it was -- if presented with an argument that said proposal would be beneficial "for the children." That was when I immediately became suspicious of any organization that had the world "Family" in the title.

It is about children, but they are only objects within the narrative.

Clement MacDonald is a partial exception to this. Admittedly he's an adult when we meet him, but we see events through his flashbacks to his childhood.

We do not see the 456 from a child’s perspective. Indeed, the thing most conspicuously absent from the narrative is any treatment of what it is like for the children to be possessed by the 456. All the children we see are oddly fine with events, joking with their parents about how they want ponies.

Phil, you've already touched on this in your post on the SJA episode Day of the Clown where you said -

In fact, though I think there is little that could be done to make this story any more disturbing than it already is, re-watching it I was struck by how an opportunity may have been missed to explore one aspect of the children's point of view. What if the children were sold the idea of alien abduction as a fun thing? There is a hint of this in the flashback scenes with Jack telling the 1965 kids to walk into the light because it's an adventure. But what a bleak and disturbingly distorted mirror of Doctor Who it would have been if the idea of leaving the Earth with an alien to have adventures amongst the stars was presented as just a cover story for the unimaginable horror of the 456. In 1965, in our world, the children of the U.K. were running around school playgrounds with stiff arms yelling 'exterminate!' in 2009 there was a revival of that phenomenon. How easy, not to mention deliciously meta, it would have been for RTD to have the establishment create...Oh I don't know, perhaps a Saturday evening Sci-fi show for all the family which presented alien abduction as a friendly gateway to adventure.

Reminds me a little of John Christopher's prequel to his Tripods trilogy, in which the aliens, as part of their invasion plan, insert themselves as funny cartoon characters into children's tv.

I think this more than anything puts the lie to the idea that Doctor Who and Torchwood really do take place in the same universe. The events of Children of Earth simply couldn't take place in an episode of Doctor Who, and Harriet Jones couldn't be the PM in CoE. If Jones acted the way she did on the Sycorax spaceship, the Cabinet of CoE would stare at her as if she was mad. The narrative styles of the two programmes are too different for something like Children of Earth to be ported across to the family entertainment world of Doctor Who.

Although there is one sequence in recent Doctor Who where I think it swings the closest to Torchwood as it ever has. The look of cold determination on Eccleston's face in that scene in "Bad Wolf" when Jack and the Doctor break out of detention on Satellite 5. I can't see the 10th or 11th Doctor in "Children of Earth", but after that scene I can see the 9th.

It is about children, but they are only objects within the narrative.

This reminds me of my main beef with Children of Earth: the ending is entirely about Jack, and not about the child he decides to kill.

Hm, most of the way through Tuesday and no new post? I reckon the government must have incased the good Dr. Sandifer in a block of concrete...

He'll deconstruct himself out of that on no time.

That scene around the cabinet table is searing, I can almost feel RTD's red hot anger. My partner, as a mother has a hard job thinking about ever re-watching CoE.

I agree totally with this, and believe it to be the biggest fault of Children of Earth. For some reason, unless I'm reading this wrongly (and I'm writing this reply after Day Three's entry has been posted) the treatment of children as objects in the narrative as opposed to actual characters appears to be justified as the text is a Queer one, and rejects heteronormative reproductive futurism. Which I have a huge problem with, as what if the 456 demanded 10% of one gender, or one religion. Or even, 10% of the homesexual population of the Earth. Would we, the audience, be as accepting of a lack of characterisation and treatment as objects in the narrative if this were the case?

My wife, who thought the first four episodes of CoE were brilliant, felt its ending deeply flawed and showed a lack of understanding of the bond between parents and grandparents.

I felt it worked on one level, showing the curse of the immortal that Jack has exemplified throughout Torchwood: he will out live all is descendants. So for him, what does it matter when they die? His grief seemed from watching his grandchild suffer more than from knowing he will never be seen again. But it is a visible (and possibly the greatest) flaw in an otherwise brilliant piece of drama.

I agree with what you say about reproductive futurism. In a way, yes, the immoral use of the children by the 456 is supposed to mirror the functional uses of children by the humans, who employ them only as political and ideological pieces in a larger scheme. The fact that there is not true child perspective on all this helps to underscore the alien-human similarity - or the human hipocrisy, we might say.

However, it's shocking the extent to which the series sometimes embarks into heteronormativity. The first episode sees all the three main characters seek a child in order to investigate the phenomenon, with the result that Jack and Ianto come across as nasty, predatorial queers trying to leech onto other people's children - Jack's grandson, Ianto's niece (like the 456). Gwen alone is allowed to have a 'moral' relationship to the child she approaches because he is no longer a child. He is one only emotionally. And then BAM pregnant, and we have the thing that Jack and Ianto can never have and that would give them the possibility of not being old predatory gay men going after children.

The scene where they find the bomb inside Jack is horrible. The way it's paralleled by Gwen's pregnancy seems to imply that harboring a bomb inside himself is the only kind of pregnancy Jack-the-gay-man can come up with - in other words, something destructive. There's something of the queer horror in Johnson's planting of the bomb as a spider laying an egg inside Jack.

In the end, the series seemed to imply that anyone who is not in a baby-making, hetero, non-queer tradional family (the 456, the government, Jack, Ianto) can only be exploiting children, while the baby-making family would be the only way of countering that.

I *don't like* that reading as I think it detracts from everything that Torchwood stands for, and I would love to hear your opinions on whether you disagree with it.