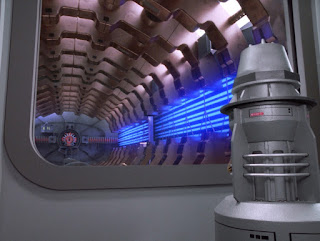 I count up to the double digits, at most, the moments in media that were so primally formative they completely changed my life. Many of them are from Star Trek: The Next Generation, and at least five of them are from this season. We've seen two of them already and there's another two to go, but “Eye of the Beholder” may well be the most momentous and personally meaningful. The degree to which the imagery and iconography of this episode have haunted me all my life, and haunted really is the only truly fitting term, is almost completely unparalleled. Why this episode stuck with me to the unbelievably powerful degree that it did, to the point rewatching it actually gave me chills due to how familiar it felt (even though, prior to this rewatch, I'd only seen it twice)...I have no explanation. Except for, perhaps, that it's really damn excellent.

But it has, and watching it again was like reliving a dream from long, long ago buried deep within the recess of my psyche: I remembered, vividly and to the last detail, the nacelle control room that features prominently in the plot. The hallucinations of the psychic imprint that constantly replay themselves. the lingering single-take shots where the camera follows Deanna Troi as she pensively meanders through the Enterprise's corridors. And, above all else, the unforgettable image of Deanna standing on the landing gazing into the pulsing heart of the ship's warp nacelle. I remember that the way I remember my first birthday, and the first house my family lived in when I was a young child. In fact, it literally was reliving a dream for me: After it was announced that TNN would start airing Star Trek: The Next Generation reruns, which would be the first time in seven years I'd have the chance to see the show again, I got so excited the show started to infiltrate my real, actual dreams. As the date approached, I distinctly remember having an incredibly lifelike dream where I was onboard the Enterprise myself. I was accompanied by Deanna Troi, dressed exactly the way she was in this episode, who took me on a tour of the whole ship so I could reacquaint myself.

One of our stops was the nacelle control room from “Eye of the Beholder”. And, just as I had been reminded once before on TNN, as I watched this inexplicably powerful episode for only the third time in my life, I couldn't help but notice that room looked exactly the way I saw it in my dream. The only difference is that now I can tell it's a stage set.

Perhaps therein lies part of the reason this story remains with me at such a close and intimate level. “Eye of the Beholder” is about the psychogeography of an imaginal space, namely, the starship Enterprise. I could point to the plot point of the empathic echo left by Lieutenant Pierce of the horrible tragedy that happened in that nacelle room during the construction of the ship, or how Deanna reinterprets it through the lens of her own positionality and those thoughts and feelings she's been working through at both conscious and unconscious levels. In essence, she creates her own personal Enterprise world that is shaped, in a negative way, by the forbidden information left behind. Places have their own energy about them, even (perhaps especially) imaginary places that are shaped by the history and lives of the people who inhabit them, both mundane and grandiose (which are, after all, ultimately the same thing). I believe particularly sensitive people can become attuned to this and be affected on a very deep and powerful level, for good or ill, depending on how their own personal information energy resonates with the energy of place. Perhaps this is where our spirits and gods once came from.

Maybe this is something I subconsciously knew when I first saw “Eye of the Beholder” and became transfixed by it at however-old-I-was. Although I stress I always liked everybody, I can distinctly remember who of this crew had my attention the most when I used to watch Star Trek back then. Before I latched onto Jadzia Dax (and later Tasha Yar during my first revisit), I remember watching Star Trek for firstly LeVar Burton, because I recognised and looked up to him, and then Patrick Stewart's Captain Picard and Jonathan Frakes' Commander Riker, because I found them charismatic and fun to watch. But then there was Deanna Troi. I seem to remember being eerily fascinated by her, and no, not for the usual reasons people are “fascinated” by Deanna Troi either: For some reason I think I maybe felt I had some sort of odd connection with her-I'm not so sure I'd go so far as to call her a cipher or someone I projected onto, although perhaps that was the case...But I'm beginning to wonder if my still-forming awareness of the world found some kinship in Deanna's preternatural ability to pull aside the veil and traverse imaginal Otherworlds that operate through the language of pataphor, heavy symbolism and association. I would not have watched this episode too long after “Dark Page”, after all, another story and set of images that had a profound impact on my understanding of Deanna Troi, Star Trek: The Next Generation and myself.

But if this is the case, what are we to make about the fact a grisly passion murder is literally embedded into the foundation of the Enterprise itself, let alone the part of it that actually makes it go forward? Deanna Troi's dream-echo is more of a horrible nightmare woven around an otherwise pleasant set of potentialities. Mine, by contrast, is a hauntingly moving set of visions that seem to always bring me back to somewhere transcendent. It certainly doesn't make me feel especially good about myself. But that's the nature of psychogeography, and of life: The same places bear witness to both bliss and tragedy at different times. And maybe there is comment that can be cast from this, because Star Trek: The Next Generation does in fact have trauma built into itself from its very nascence: The trauma of Gene Roddenberry's legacy and the looming shadow of militarism. A traumatic series of events that have hamstrung this show from the very beginning, very nearly threating to kill it before it was ever born. Murder and loss are, in a very real sense, coded into the landscape of Star Trek: The Next Generation's dream for hopeful progress and utopianism.

This need not be the case forever. Place-energies always ebb and flow. If we want our home to feel happy, we must strive to do things there that make us happy. The energy conduit is not one-way. If we tap it and channel the spirits towards the full realisation of our own true selves and true potentials, we can give back to the land as much as it gives us. And this is something I think Deanna Troi and her shipmates are aware of. In her own mental landscape, she explores love, on her own terms for the first time. All love begins as a potentiality within the imaginal realm first, and is reified through understanding, empathy and the desire of people to make it so. Deanna's perpetually exploratory relationship with Worf thus becomes the most believable, and sweetest, romantic relationship this show will ever depict (that is, so long as you ignore just about everything from “Ethics” to “Parallels” at any rate).

Not does it become a perfect metaphor for relationships in potentia (as all relationships are forever in potentia in one state of being or another) by casting the narrative lens just a bit askance, as all the best genre fiction can do, it's also eminently relatable: Worf, both inside and outside Deanna's reality, behaves exactly the way someone who has just started to view his feelings in a different light and is very nervous and self-conscious about the possible ramifications of exploring them is going to behave. It is, in point of fact, the single best thing that's been done with Worf since “Heart of Glory”. And Deanna, for her part, runs through a very recognisable gamut of dreaming a fantasy a certain part of her desires and would so very much enjoy, yet at the same time imaging all the possible ways it could go wrong. Her tragic melodrama is a perfect introspective mirror of Worf's shuffling awkwardness in the first part of the episode, the only difference is we get to see hers played out for us. Meanwhile, Geordi and Data show us a very different sort of love: Not romantic or platonic for each other, but for all of life. Their conversation about suicide is pitch-perfect and the exact sort of scene these characters exist to play.

“Eye of the Beholder” indeed. Perhaps this is what this story is trying to tell me. Listen to what the world and the spirits within are saying and respond in kind. Together we will make magick that will sublimate the world and take us beyond the imagination. Share on Twitter Share on Facebook

Nice analysis - I particularly enjoyed reading about the psychogeography perspective. A lot of the imagery of this episode was memorable for me too.

I personally have some feminist gripes with this episode. It is the second in the series in which Deanna is jealous over a man - the first being 'Man of the People', which is pretty much unwatchable for me. Eye of the Beholder isn't, though I perceive some unfortunate parallels between the two, as in both there are external forces that have 'taken hold' of Deanna and led to her 'irrational' jealousy. There are just too many cases in the series of the writers using plot devices in a way that justify effectively turn Deanna into dramatically heightened versions of walking, sexist female gender stereotypes. 'The Loss' is another example; Deanna is pretty much portrayed as your quintessential 'hysterical woman'. The extreme lengths that Deanna is willing to go to in EOTB as a result of her jealousy (willing to kill herself) takes the archetypal idea of the 'jealous woman' to a wholly new and terrifying level. Star Trek is bad for this - there seems to be the mentality that if a female character is under the influence of some mysterious alien or enigmatic force, hyper-dramatic stereotypical gender representations are okay. Respectfully, this is where I have to say fuck you, TNG.

I do remember being particularly struck by the imagery in this episode - including the inner workings of the nacelle. The idea of death being at the heart of the Enterprise is pretty shocking and stunning as a comment on the show's origins.

And the Work and Deanna relationship is indeed for me one of the best represented in the show overall for me. I just enjoyed so much witnessing how each character was being open up by the other. Lovely.