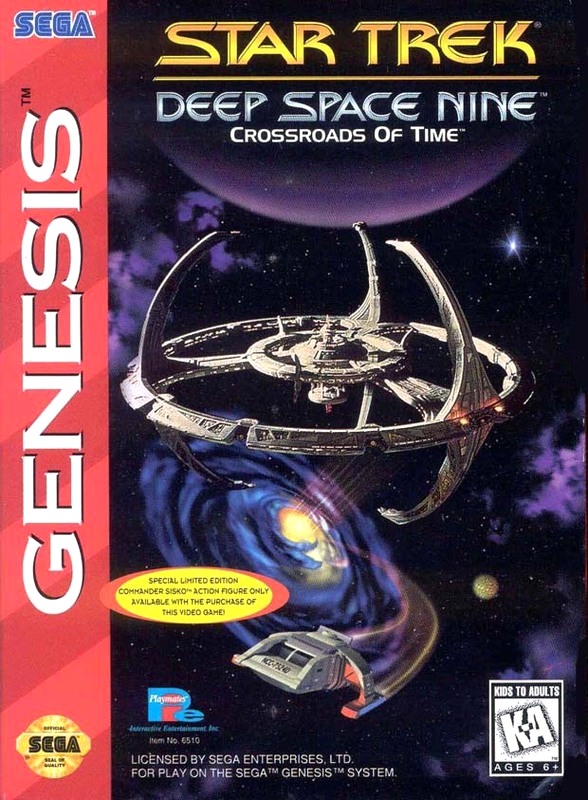 While both official and unofficial video games based on Star Trek: The Next Generation were quick to release upon or soon after the show's premier in 1987 and have been in no short supply over the years (my inability to play almost all of them when they were current notwithstanding), that wasn't the case for sister show Star Trek: Deep Space Nine. It took a good two and half years after “Emissary” before Commander Sisko and Co. started getting representations in video game form, and when it finally happened it happened a weird way.

Without rehashing the whole history of the video game medium again, it's perhaps unsurprising that the earliest Star Trek: The Next Generation video games were fanmade or otherwise small-scale affairs for DOS and similar personal computers of the mid-to-late 1980s. The first proper “mainstream” Next Generation game I was aware of (at least, the first on a video game console) didn't land until 1993 on the Game Boy. There is a very good reason for this, of course: It wasn't until 1993 that it was eminently clear Star Trek: The Next Generation was a pop culture juggernaut that deserved more recognition ...

We also got some new action figures to go along with our new models, all based on stories from the second season. This wave is a healthy mix of variants and new figures (and, like TNG, once again spread out across 1994 and 1995), and really, just about more than anything else from this period, tantalizingly points at how interconnected the worlds of Star Trek: The Next Generation and Star Trek: Deep Space Nine really did seemed poised to be at one time. First up, let's talk about the predictable variants: There's “Emissary” Jadzia Dax and Doctor Bashir, that is, them in the TNG-style two-piece suits with the polygon design instead of the DS9-style black jumpsuit and open collar shirt. I talked about Dax the first time I did Playmates DS9 because she's one of my favourite toys in the whole line, expertly re-using the already excellent Duty Uniform Deanna Troi body sculpt. I don't have Bashir though, because his Wave 1 figure was already pretty good and he feels more superfluous to me. There's also Q in the DS9 jumpsuit, from “Q-Less”. But really, when it comes to Qs, my advice is still to ...

1994 didn't see Playmates unveil a lot for fans of the Star Trek: Deep Space Nine side of the Paramount lot, but what it did release was more than enough. Because for the first time, Starbase Deep Space 9 was finally immortalized in plastic.

If you wanted a model of the one-time Terok Nor back in the day, your options were pretty limited. There was, of course, the laughably expensive and decadent pewter desk sculpture I talked about in my essay on Star Trek: Deep Space Nine Magazine, but you weren't going to be getting that. AMT/ERTL released a model kit of the station in 1993, but model kits are aimed at a very specific sort of fan, and I was not that sort of fan (I did eventually get one, as well as the 1995 re-release that had a fiber optic lighting system, but my crafting skills are so hopelessly inadequate I was never going to be able to do it justice). No, for the overwhelming majority of people, it was going to be up to Playmates to give us a version of Deep Space 9 we could take home and display on our shelves. It ...

The final group of toys in Playmates' Star Trek: The Next Generation line (that is, before all of their Star Trek toys were consolidated under one homogeneous brand label) have something of an unusual release history. The third wave released in three parts over the course of 1994, surrounding the premier of the movie Star Trek Generations, with a fourth dropping in the summer of 1995. I love how, as far as Playmates was concerned, Star Trek: The Next Generation fully remained an extent, relevant and marketable brand for at least a full year after the TV series itself went off the air. Even though the show was over, Star Trek: The Next Generation remained very much a present cultural phenomenon for some years after the fact, a theme I'll be returning to in the remaining chapters of this volume. It almost kind of makes you wish the show itself had been around to bear witness to that, but that's beside the point tonight. Tonight, it's all about the toys.
And what toys they were! Playmates had already endeared itself to me as the makers of probably the greatest plastic effigies of anything ever, and these ...


I first learned Playmates were going to be doing a line based on Star Trek: Deep Space Nine on the cardback for one of my Star Trek: The Next Generation figures. In fact, on the back of my new Sela figure you can still see in bold red lettering the excited announcement that “toys and accessories” from the new show are “coming soon!”. Some of the figures from Star Trek: The Next Generation Wave 2 and the Original Series line (here called “Classic Star Trek”, which is how I knew that show for ages) even came with a mini checklist of all the Playmates toys released so far, with headshots of the figures and close-ups of the vehicles, playsets and prop replicas.

On the back of that checklist was one of the first-ever promotional shots of the Star Trek: Deep Space Nine cast-It's the one where everyone's standing around in costume in front of a brown shag curtain haphazardly draped over the walls and floor of a photo studio somewhere. This was the first static image I ever saw of the Star Trek: Deep Space Nine cast together in one ... 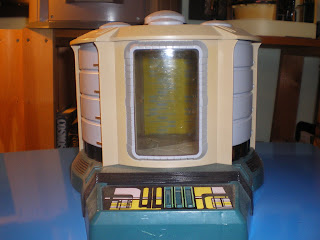 The other playset released this year was a transporter room. Now this was really cool because it actually worked by way of an old theatrical trick called Pepper's Ghost. In a Pepper's Ghost illusion, a one-way reflective surface ... 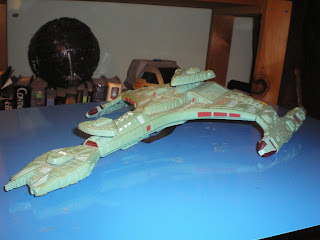 Both of these ships are very nicely detailed. Actually, in hindsight, I have to say they're a bit more impressive than the Playmates Enterprise itself: The colours and proportions of both are screen accurate, which is really important when dealing with starships this distinctive and memorable. The Attack Cruiser does fare a little better in this regard: All of the little details and elevations Rick Sterbach sculpted onto it to emphasize shadowplay with the studio lights have translated perfectly to consumer-grade plastic, and as such I've always considered it one of the most bang-on replicas of the Playmates line. The Romulan Warbird only suffers a bit due to ...


As the Playmates line of Star Trek: The Next Generation action figures expanded, I have to confess I started to get less of them. I know it's hard to believe and that I have to keep stressing this, but I was actually never a hardcore Star Trek fan, and thus didn't possess an encyclopedic knowledge of every single character and every single episode. When it came to toys, I was primarily interested in the Enterprise crew and the most recognisable aliens: My fondest memories of Star Trek: The Next Generation are of images and scenes, not specific episodes or stories. So, as Playmates began to expand beyond the main cast of characters I wasn't as feverish about keeping up with their releases.

It's the second wave where this began to manifest. That's not to dismiss the toys from this wave and beyond in the slightest: They're all of the exact same peerless quality you'd expect from Playmates Star Trek, just to articulate and further highlight where my interest in this franchise really lies. This is the wave where variants, one-shots and reoccurring characters started to ...