1994 didn’t see Playmates unveil a lot for fans of the Star Trek: Deep Space Nine side of the Paramount lot, but what it did release was more than enough. Because for the first time, Starbase Deep Space 9 was finally immortalized in plastic.

If you wanted a model of the one-time Terok Nor back in the day, your options were pretty limited. There was, of course, the laughably expensive and decadent pewter desk sculpture I talked about in my essay on Star Trek: Deep Space Nine Magazine, but you weren’t going to be getting that. AMT/ERTL released a model kit of the station in 1993, but model kits are aimed at a very specific sort of fan, and I was not that sort of fan (I did eventually get one, as well as the 1995 re-release that had a fiber optic lighting system, but my crafting skills are so hopelessly inadequate I was never going to be able to do it justice). No, for the overwhelming majority of people, it was going to be up to Playmates to give us a version of Deep Space 9 we could take home and display on our shelves. It’s kind of surprising this wasn’t a 1993 release: After all, you’d expect people would want the titular space station straight away-The Enterprise was among the first wave of releases for the Star Trek: The Next Generation line. But the Playmates Star Trek: Deep Space Nine line was always smaller and more subdued than its sister, and maybe there was concern during development as to how the new show was going to take with people. 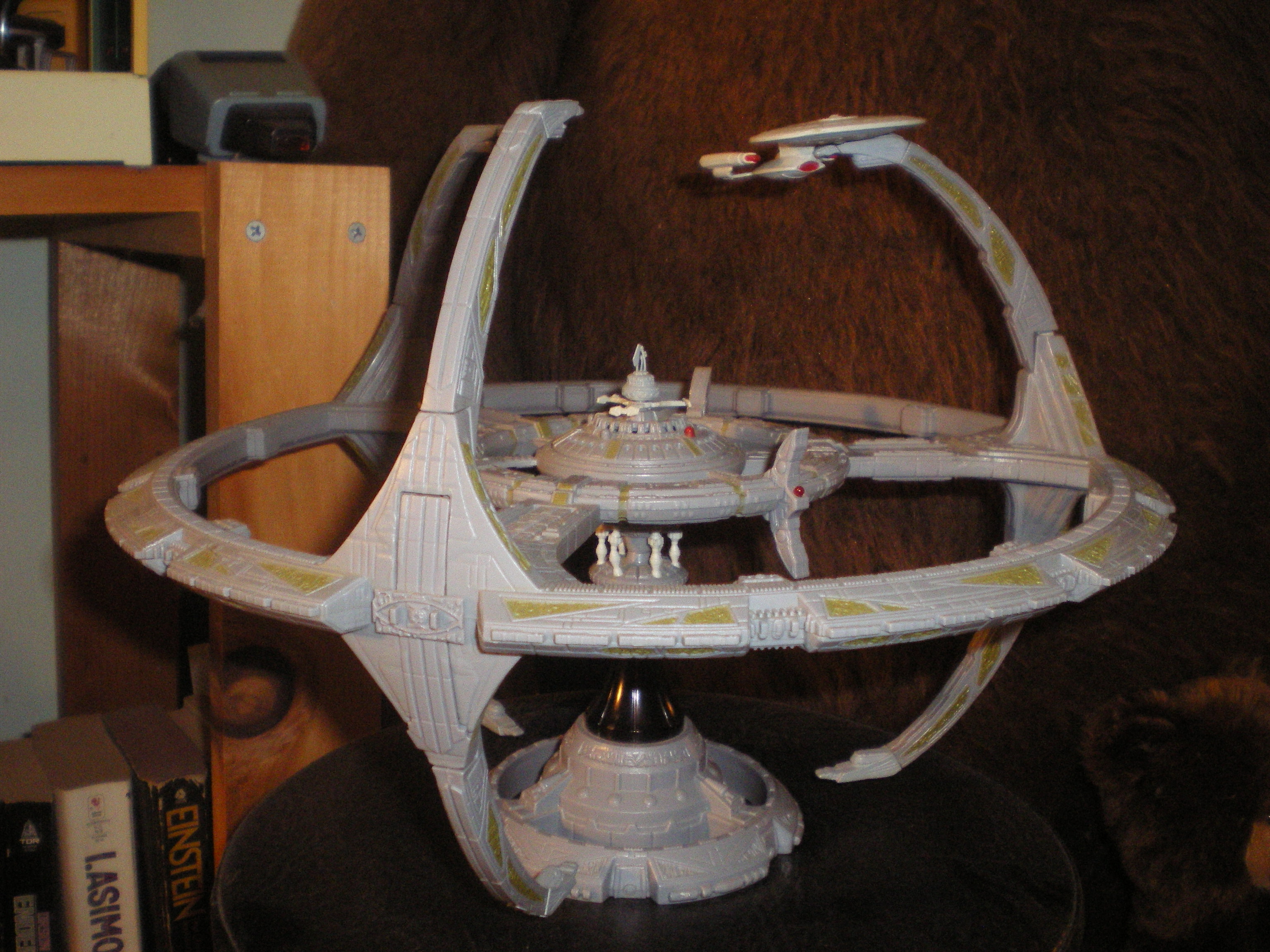 Even when it did come out, I remember this being a right bastard to track down. I seem to recall only actually seeing it in the toy store once, and I keep kicking myself for not springing for it then and there. I never saw it again until eBay was a thing, by which point it was going for astronomical prices as a collectible. Long story short I finally was able to find one for a more reasonable investment (*in 2009*) and I’m proud to say DS9 now occupies a prominent position in my collection. In terms of detail, this sadly trends to the toyetic side of things, and some of the more subtler nuances of the shooting model have been lost in translation. But, it’s of a piece with the Playmates Enterprise at least. Speaking of! The Deep Space 9 toy actually comes with a little miniature Enterprise that snaps into one of the docking pylons! It’s little touches like this that really endear the Playmates line to me, and to this day this is one of my favourite things about this model. 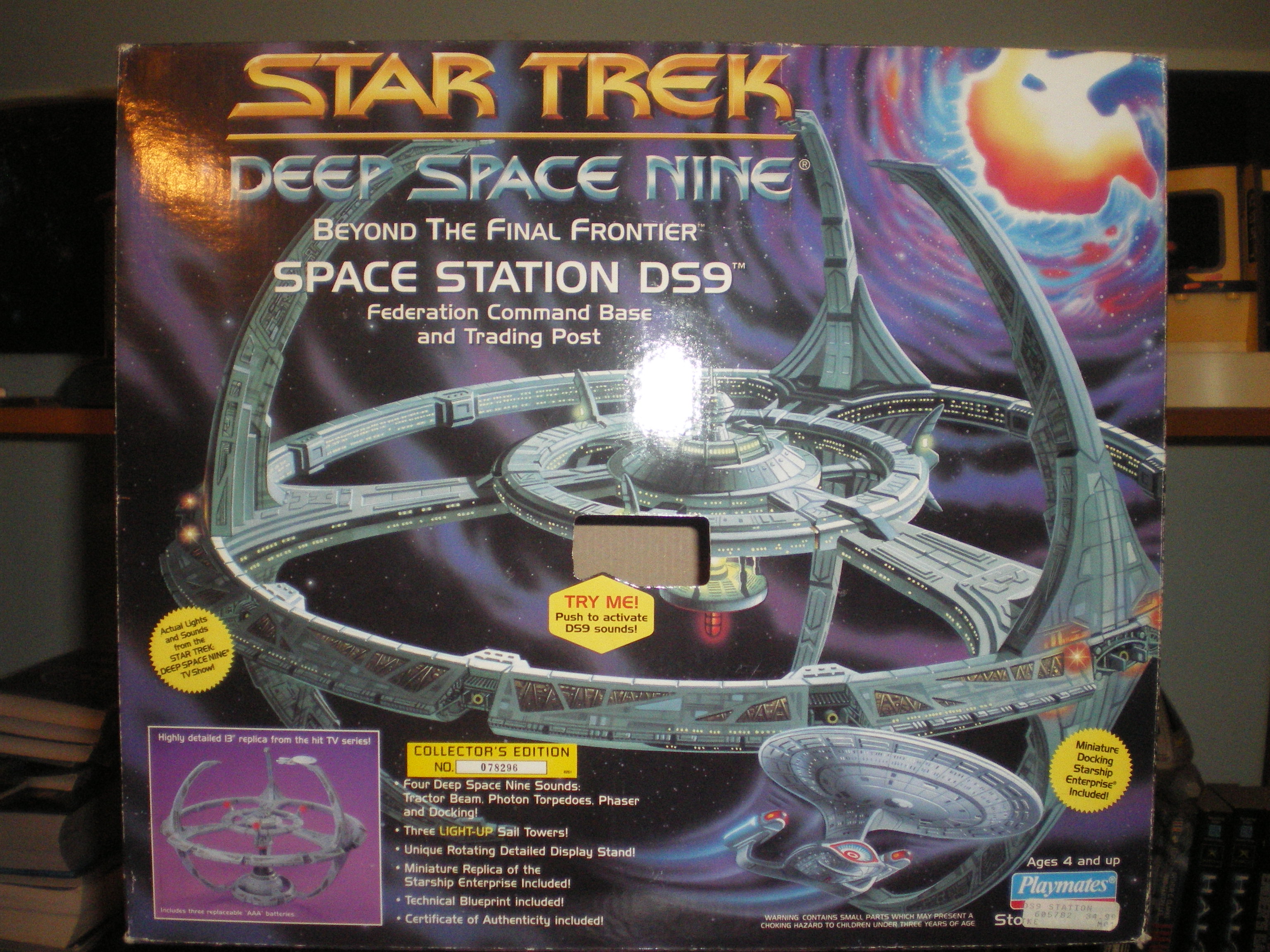 Primarily because it demonstrates how intertwined and interconnected Star Trek: The Next Generation and Star Trek: Deep Space Nine were supposed to be in the beginning. The Enterprise is featured prominently on the box art, and Deep Space 9 is specifically called a “command post”, which reminds me of those old jumbo GI Joe or Micro Machines playsets you could get to play with all your figures in. They were always called something like “command post” or “command centre” or something like that too. You have to imagine DS9 as a kind of home port or home base for the Enterprise, from which it goes off into a grand adventure exploring the Gamma Quadrant before coming back home to report back. Playmates must have assumed the shows were going to cross over a lot, and must have wanted you to have both lines of toys (and therefore both crews) to interact frequently. In fact, this is even backed up by some of the actual action figures Playmates chose to release for this wave, which I’ll talk more about later on.
(The particularly obsessive fans will complain that the Enterprise isn’t actually “to scale”, but I say Fuck That, because if it were it would be a big solid chunk of plastic. And anyway, I actually *like* the implication that Deep Space 9 is way, way bigger than we think it is: It gives a sense of grand scale and splendour to the station that the all-too-often too-cramped TV sets didn’t. In my mind, the station really is that big and the Enterprise really is that dwarfed by it. And, if you go back to the earliest brainstorming concept sketches of the station, it was.) 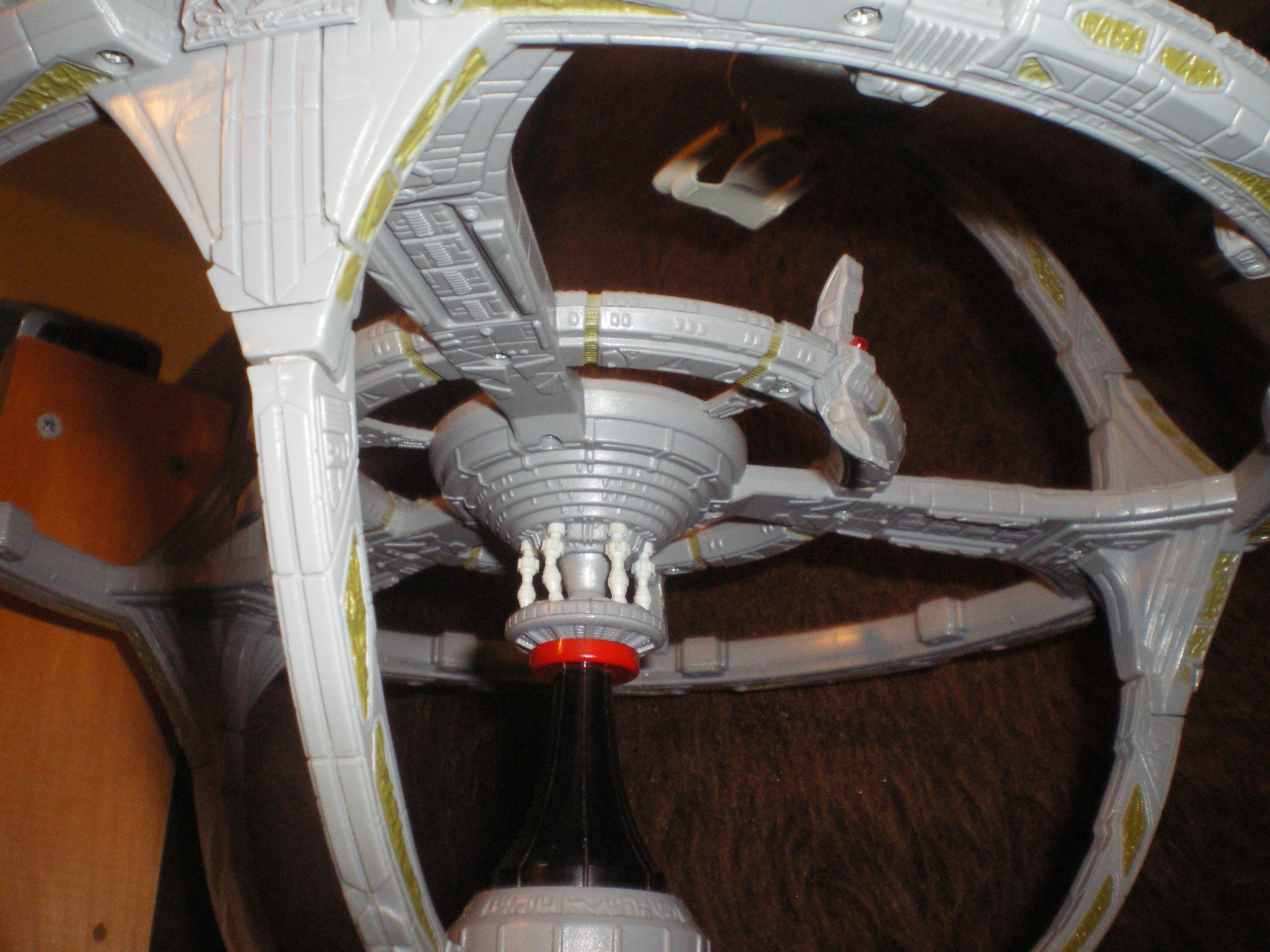 Apart from the Enterprise, Deep Space 9 also has some other nifty features. The station itself sits on a custom base that swivels, so you can make it rotate like on the show. The antennae around Ops also spin, and the sensor towers are wisely made out of soft moulded plastic so they don’t snap off during heavy play. It also has some lights-and-sounds effects, namely phasers, photon torpedoes, tractor beam and docking. The defense sails light up when you push the buttons, and I have to say the sound card on this one is really impressive: The effects are very accurate to the way they sound on the actual show, far more than any of the earlier Playmates Star Trek vehicles and playsets that had them. 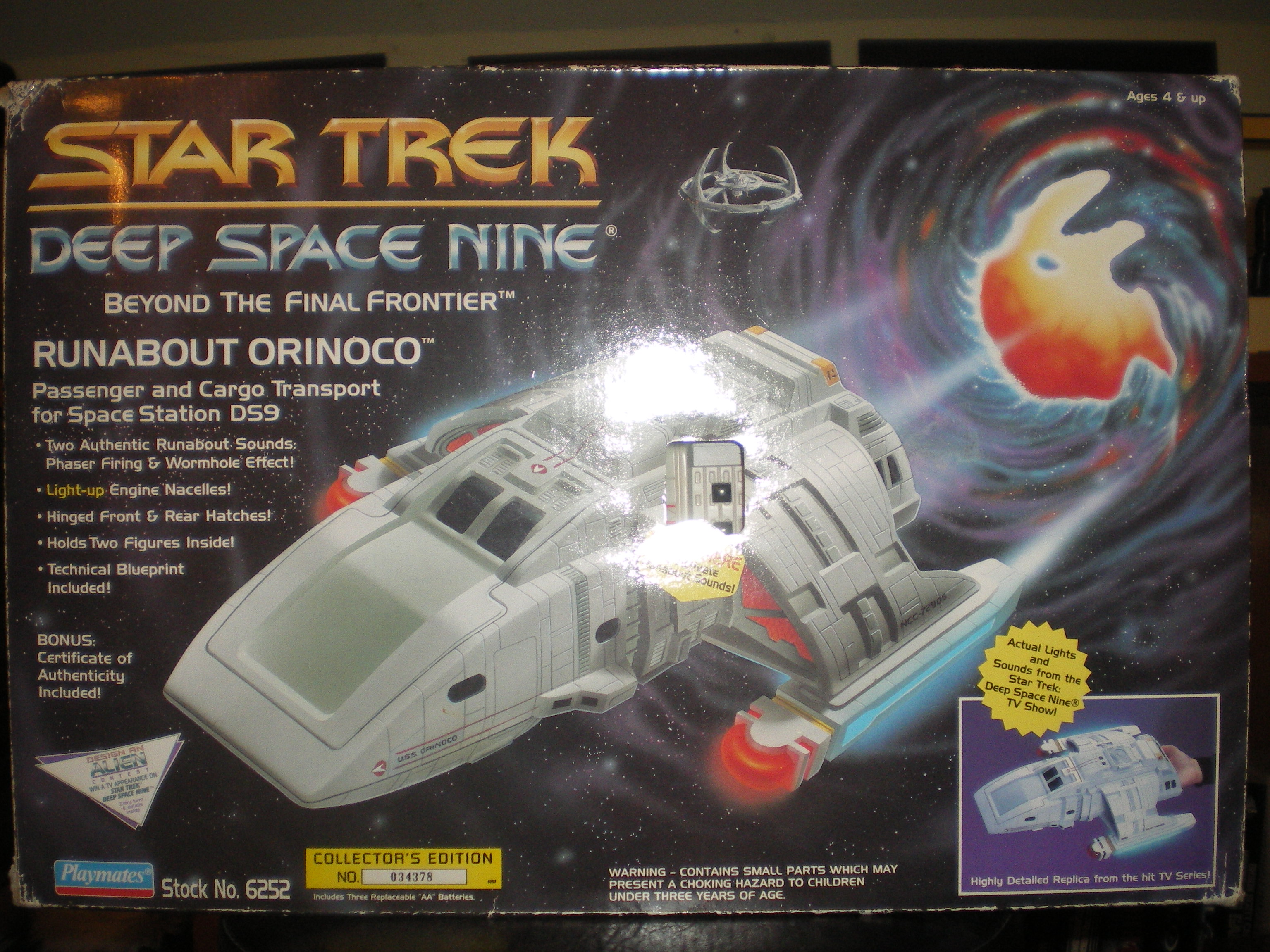 Alongside Deep Space 9 itself, wave 2 also gave us a model of the Runabout USS Orinoco. An interesting choice: Not the obvious, iconic pick (the Rio Grande), but this was the new ship introduced in the second season to replace the Yangtze Kiang that crashed in “Battle Lines”. Playmates probably figured since it was a new ship, it would be featured prominently in the year’s crop of episodes. Either way I’m very happy to have it: Possibly the very first piece of Star Trek: Deep Space Nine merchandise I got was the AMT/ERTL model kit of the Rio Grande, because the Runabout was one of the first things that really stuck with me about the new show. I’ve never had the skill or patience for model kits, but my father put it together for me and I always loved the cool, edgy new futuristic look of the design and the satisfying heft of the kit itself. So I was really happy to discover Playmates made a Runabout model of their own that was built to be played with. 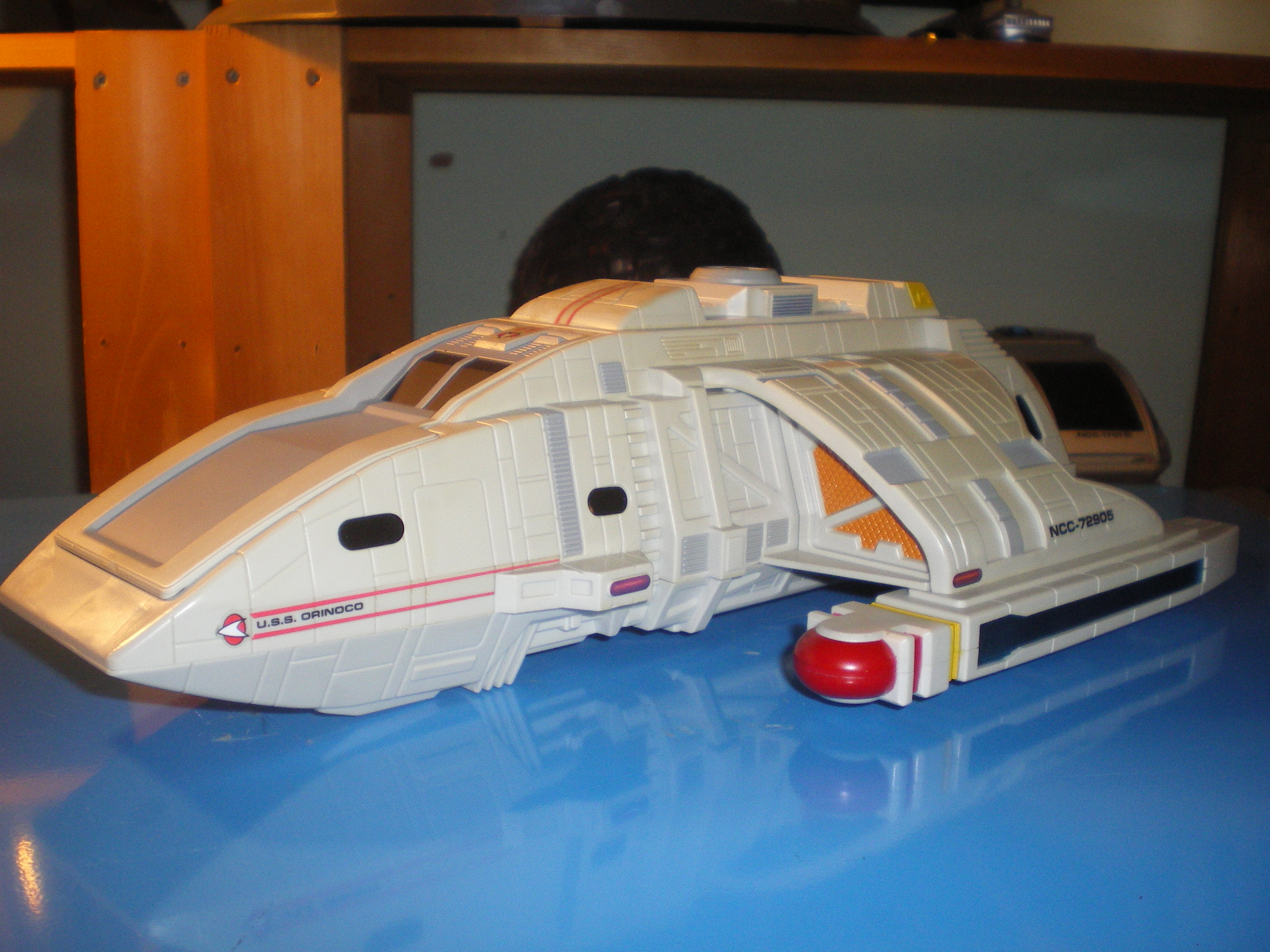 The Orinoco is a bit of an odd duck, however. It’s even bigger and heftier than the AMT/ERTL Rio Grande, which I enjoy. But mechanically, it’s modelled after the excellent shuttlecraft Goddard toy from the first Star Trek: The Next Generation wave (it even has little wheels on the nacelles so that you could run it across the floor, just like the Goddard does). This means you can store two figures in it to emulate how you would often see a Runabout being flown by two pilots on the show (the box shows Commander Sisko and Jadzia Dax, delightfully). The problem is, Playmates had to jump through a lot of hoops to make the Runabout toyetic, and as a result it isn’t anything like to scale with the actual figures. The shuttlecraft is a much smaller vehicle and it translates to toy form pretty effortlessly, but the Runabout is supposed to be an actual starship and it sadly loses a bit in the translation. 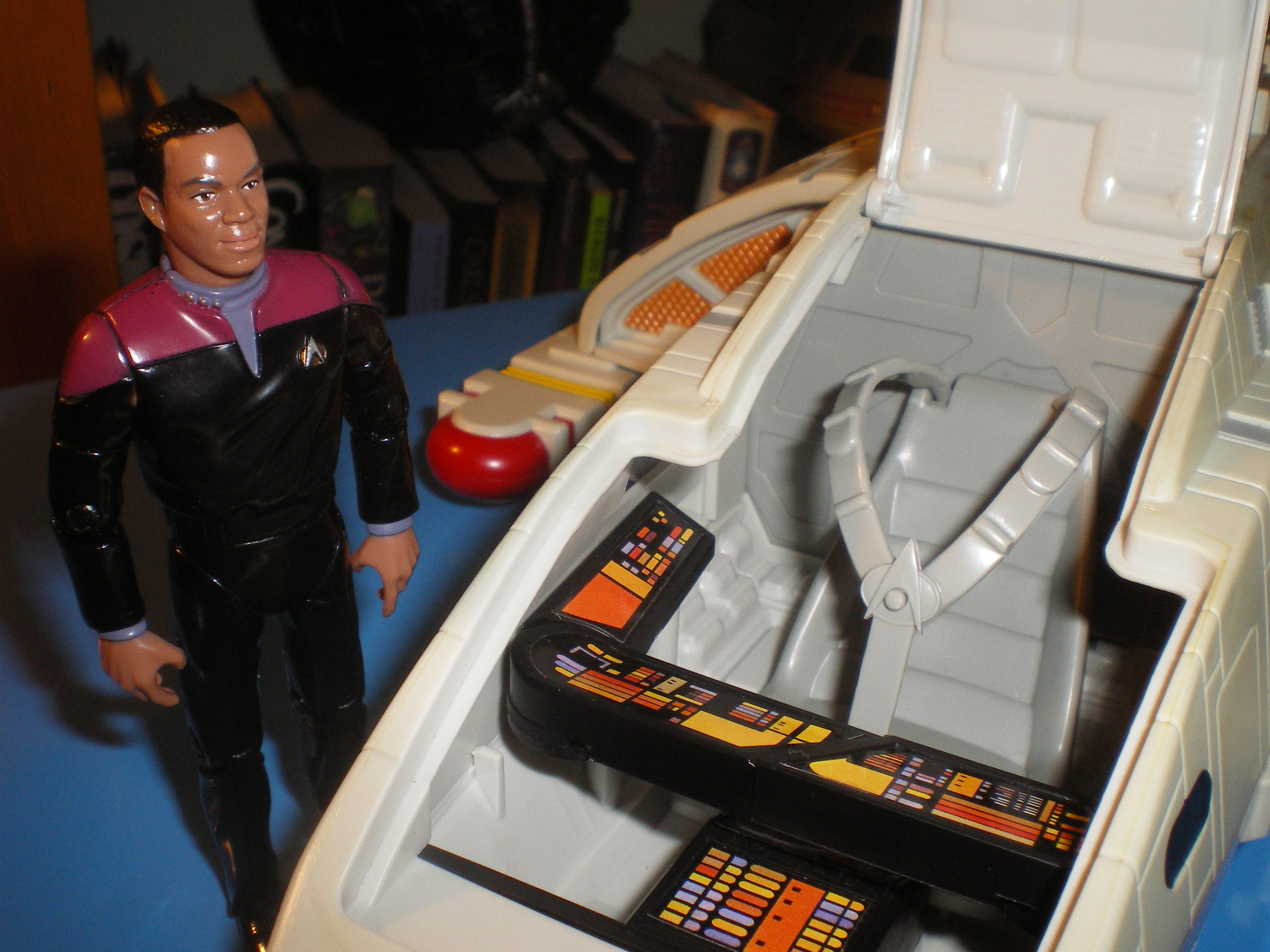 There are two cockpits, one in the front and one in the back because an actual to-scale Runabout would be enormous: You can even see etched detail on the front where the door would be on the actual ship, and it comes up to about your toys’ kneecaps. And the second cockpit takes up the entirety of a part of the ship that’s supposed to be a common room (the part seen in “Timescape”, incidentally). One of the strangest consequences of this is that the whole front side of the ship is reversed, with the two forward facing windows (which are supposed to be fairly sizeable) reimagined as basically a pair of portholes for the pilot to look out of while they’re steering the Runabout. It gives the Orinoco a rather bizarre profile, and yet one that’s also oddly distinctive: There’s no mistaking this Runabout for any other, and one Malibu Comics DS9 story actually uses this interpretation of the Orinoco as a reference model. 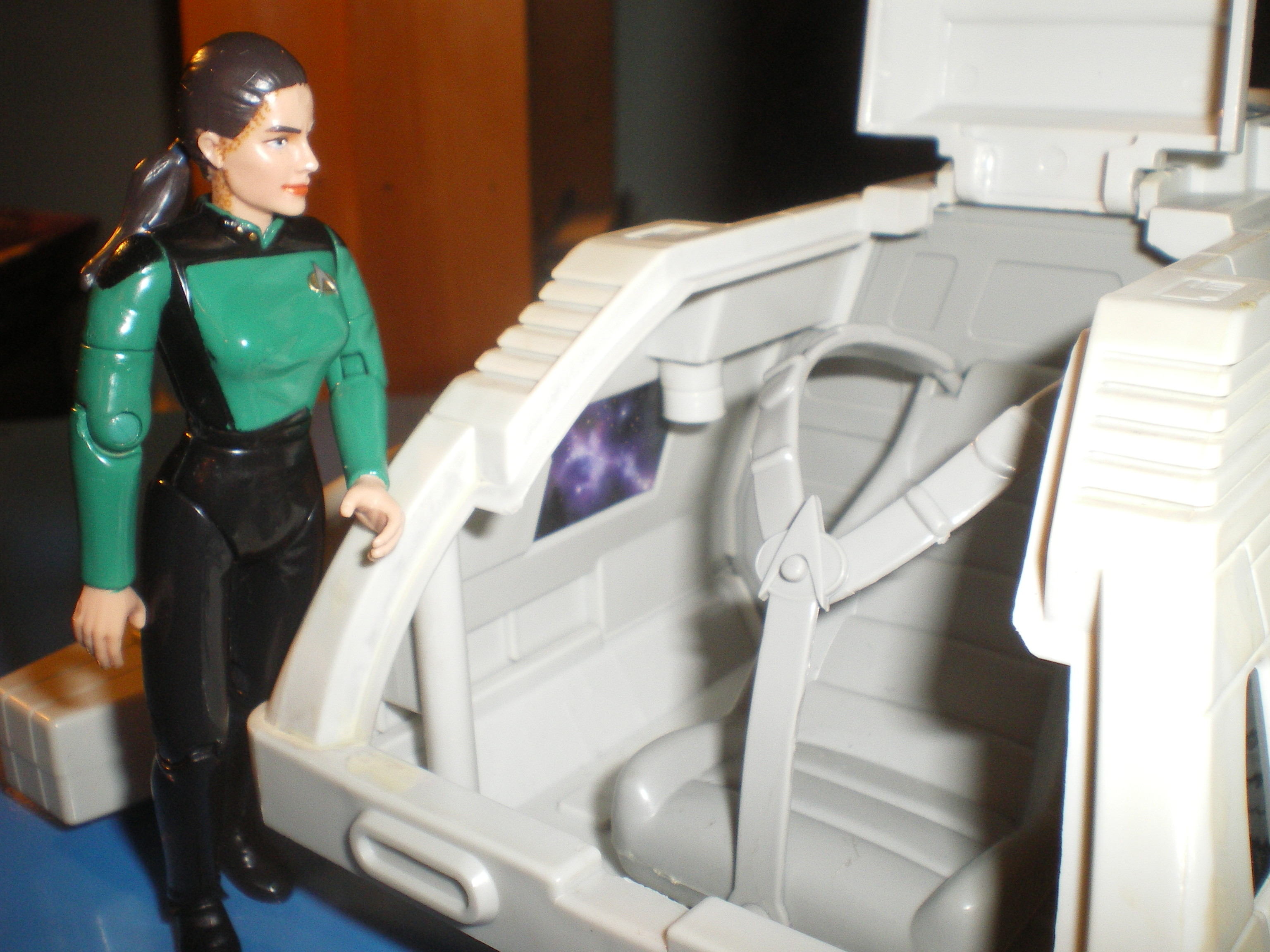 The cockpits themselves look fairly spartan on the inside, and while the Goddard‘s does too, it’s offset a bit there by the fact the ship is all a fairly uniform colour, which the toy is modelled in. The Orinoco, on the other hand, is the same uninspiring off-white that the first Playmates Enterprise is, whereas the actual set was at least a bit more colourful than that. It’s certainly a respectable play vehicle though, and, like Deep Space 9 and all of Playmates’ other models, has lights-and-sounds functionality. The Orinoco gets a phaser blast as well as the distinctive sound of the Bajoran Wormhole opening, and while it’s a passable resemblance to the sound effects on the show it’s a bit less impressive a resemblance then you get on Deep Space 9: Like the Enterprise, these sound a bit muffled and pitched down, and furthermore almost sound as if they’re playing in mono. Like the other starships (as well as the shuttlecraft) the nacelles light up with the sound effects, and while the lights are bright enough they won’t really be lighting up a room.
One more thing on this topic…We were actually supposed to get one more ship model in this wave: The very first advertisements for Playmates’ Star Trek: Deep Space Nine proudly proclaimed that, alongside Deep Space 9 and the Runabout, the Cardassian Galor Warship would be among the initial releases. It was not among the initial releases. It was not part of the second wave. It was not part of any wave. It does not exist. I have no idea why as it’s a heckuva cool ship (one of my absolute favourite Rick Sternbach designs) that appeared in a lot of important episodes in both Star Trek: The Next Generation *and* Star Trek Deep Space Nine and seems like it would have been a shoe-in. It would have made a kickass toy, too-I’dve loved to have one.
Of course, you can’t just have the mecha. The true heart of any ship lies with the people who travel aboard her…

L.I. Underhill is a media critic and historian specializing in pop culture, with a focus on science fiction (especially Star Trek) and video games. Their projects include a critical history of Star Trek told through the narrative of a war in time, a “heretical” history of The Legend of Zelda series and a literary postmodern reading of Jim Davis' Garfield.
A Brief Treatise on the Rules of Thrones 4.05: First of His Name Comics Reviews (June 29th, 2016)