Been watching a PBS documentary about the Scottsboro Boys.  The narration does everything it can to infantilise the Communists who got involved, to downplay their contribution, to chalk it up to cynical opportunism, to suggest their involvement did more harm than good, etc.

The basically accurate account of events makes it clear, however, that it was the involvement of communists (and other people who got involved because communists made the case an issue) which ultimately led to the Scottsboro defendants getting even the meagre amount of justice and freedom they did.

Towards the end, the narration says “not protests or marches or newspaper articles but simply time itself” brought Alabama to free most of the defendants… which, if you stop to think about it, is an absolutely out-fucking-rageous thing to say.  As if just waiting for a while would’ve freed the defendants by itself.  As if the Alabama ‘justice system’ would’ve seen the light eventually even if nobody had ever kicked up a ruckus about it.  As if the Alabama racists didn’t need to be opposed and fought and exhausted and embarassed into submission ...

The BBC's failure to protect kids from Jimmy Savile is revolting, but it's hardly the beginning or the end of their disinterest in violence against children.  Certain children, anyway.  The keepers of Pudsey are strangely uninterested in the child victims of powerful and influential people... be they depraved DJs or depraved states that happen to be Western allies.

For instance, as I write this, the state of Israel - a brutal, aggressive, nuclear armed, apartheid state which is mysteriously supposed to be less of a threat to world peace than Iran - is murdering Gazan children.  (It does no good, by the way, to trot out that old chestnut about them not deliberately aiming at the kids... if you get a machine gun and spray bullets blindly into a school, it's no good later claiming you were only trying to hit the cigar-smoking TV personality lurking in the corner.)

This is nothing new, nor is the BBC response, which is as routine as it is pusilanimous.  Indeed, cowardice in the face of the powerful Israeli lobby (not to mention the backing Israel gets from the USA and our government) is the most charitable interpretation.  ... 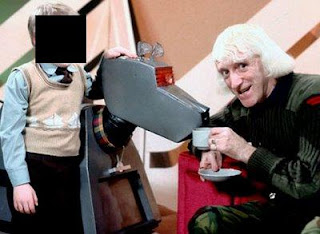 Victory of the Icon 3

I have a massive, endlessly-lengthening list of books, old and new, that I want to get around to reading.  Donny Gluckstein's new book A People's History of the Second World War just went straight in near the top of the list.

Gluckstein's argument seems to be that WWII was actually two wars, fought in parallel.  One was an imperialist squabble between established empires and up-and-coming imperialist nations that were set to clash with them.  Britain, France, Russia and America (which was already a continental empire and was ready to expand globally) found themselves violently competing for hegemony with Germany, Italy and Japan.  Running beneath this conflict there was a people's war against fascism (the form taken by the new empires) underpinned by dreams of freedom and democracy.  The imperialists running the first war knew that had to appeal to the priorities of the people fighting the second war in order to enlist their support, hence the democratic rhetoric.

I mention this here because Gluckstein has done an interview for New Left Project, in which he has some things to say about Winston Churchill, the subject of my irregular 'Victory of the ...

I see the first big trailer for the next installment of Nolan's Batman franchise has been leaked.  It looks consistent with the previous films.

Remember in Batman Begins, the League of Shadows claim to have caused the recession that crippled Gotham when Bruce was a kid. So recessions happen not because capitalism is inherently prone to them but because nefarious Europeans and Orientals come over from outside and artificially create them.

Of course, recessions are something that happens to capitalism, not something that capitalism can't help itself causing... we know this because Bruce's Dad is a noble, wise, kindly man who happens to be hugely wealthy and own a massive mega corporation, so wealth and corporations must be just fine and dandy per se. Papa Wayne has even helped the city... by building a massive elevated train system. Hmmm, that'll help the people who can't afford tickets (or homes) anymore. And naturally it was all done at his expense and he made no profit... something that is even less likely in reality than flying bat-costumed ninjas.

Sure enough, we later learn that corporations are only bad when run by unscrupulous individuals like Rutger Hauer ...

The BBC doing what it does best: "In Iran's iconography of villainy, Britain holds a special place. The UK is seen as the mastermind behind the overthrow of previous Iranian governments. Conservative hardliners believe Britain has in its blood the desire to decide who rules Iran."  Textbook stuff from James Reynolds "BBC Iran correspondent".

Make it all a matter of opinion: "is seen as".  Put it down to someone at the so-called 'extreme': "hardliners".  Pathologise the unacceptable view, make it sound like childish paranoia, sneer at it under your hand: "Iran's iconography of villainy".

Fact is, if people in Iran feel that way about us, they are justified.  The British government, lead by Winston Churchill, were the original movers in the plot to overthrow the democratically elected government of Mossadegh, because he wanted to nationalise the Anglo-Persian Oil Company, which funnelled oil profits out of Iran to Britain (in other words, he had the temerity to think that Iranians should benefit from Iranian resources).  Churchill put up the money.  The CIA took over the plot.  They hired mobsters and Nazi collaborators in Iran.  CIA agents started riots.  They started ...

In his fascinating essay 'M.R. James and the Quantum Vampire' (the link is to a PDF), the author and theorist China Miéville wrote:

The spread of the tentacle – a limb-type with no Gothic or traditional precedents (in ‘Western’ aesthetics) – from a situation of near total absence in Euro-American teratoculture up to the nineteenth century, to one of being the default monstrous appendage of today, signals the epochal shift to a Weird culture.

Miéville charts the way that the cephalopodic suddenly erupts into late 19th-early 20th century "teratology" (monsterology), with conflicted foreshadowings and pre-disavowals (Verne, for example, and Victor Hugo) leading up to a story called 'The Sea Raiders' by H. G. Wells, in which previously unknown squidular monsters suddenly surface and go on an inexplicable rampage off the British coast, and on to the "haute Weird" of William Hope Hodgson and, especially, H. P. Lovecraft.

In this Weird tentacular, Miéville sees much significance.  His argument, as I've gathered from the essay mentioned above (and from listening to various talks he's given), is that the squidular, tentacular and cephalopodic, but especially the octopoidal, arises as a teratological metaphor to supply a need felt by those writers travelling ...