Israel is currently killing hundreds of people in Gaza.  As they do from time to time.  To make something Abba Eban once said true by simply inverting his meaning: the Israelis never miss an opportunity to miss an opportunity for peace.  Though even that is too kind to them.  As even White House senior staff acknowledge, the Israelis don’t want peace.  Give them everything they’ve ever wanted, and it still isn’t enough – because what they say they want isn’t what they want.  What they really want is to continue the war until they have finally completed the work that David Ben-Gurion left unfinished, and eradicated the Palestinians.  The mindset of Israel is genocidal, and becoming more openly so by the day.

It is now clear to a great many people that what happened to the Native Americans as a result of the institution and independence of the United States of America was a scandal, a holocaust and a tragedy.  The idea is so commonplace it’s become a sentimental truism in pop-culture.  Well, Israel had not done very much that America didn’t do in the process of getting where it is today.  Israel has shaken off its origin as a colonial possession of the British Empire.  Israel has ethnically cleansed huge swathes of land of the original inhabitants, and then claimed this land for itself.  Israel has repeatedly started wars for territory.  Israel has herded the original inhabitants of its land mass into tiny, racially-segregated reservations.  And so on.  And yet the obvious – that ‘what happened’ to the Native Americans was terrible – doesn’t seem anything like so obvious to a great many people when you’re talking about the Palestinians.  People seem able to get past the fact that Native Americans did some godawful things to Americans, putting it – rightly – in the context of the Native American’s fight against territorial displacement and dispossession.  Yet Hamas is said to be responsible for the rampage of destruction and slaughter Israel is currently visiting upon the civilians of Gaza, because some people in Gaza have a few relatively meagre weapons which they occasionally have the temerity to use against the nation holding them in a massive concentration camp.  Context be damned.

Clearly, we are more than capable of holding nuanced attitudes to the question of killing people – the problem is that the proper nuances are usually provided for us by people in power.  The nuance allows us to see the sad necessity of killing that is accepted – with a sigh and a tear – by the official goodies, and the utter incommensurable evil of the official baddies.  Sometimes ‘we’ are even allowed to be the baddies – as long as it was a long time ago, and we’re all very sorry now, and nobody defends it (though we all still continue to benefit from it, and do the same things to other people now), and as long as no comparisons are drawn with anything happening today.  We can see that the Native Americans had a context for scalping people, as long as nobody is loopy enough to dare suggesting that perhaps Palestinians have a context for rockets.…

END_OF_DOCUMENT_TOKEN_TO_BE_REPLACED

(EDIT: I originally posted a screencap of Seymour’s tweet of a screencap.  But Seymour has now posted the original screencap itself on his blog.  So it seems only fair to remove my screencap of his tweet and just link to him.  Not that he needs hits from me.) …

END_OF_DOCUMENT_TOKEN_TO_BE_REPLACED

The BBC’s failure to protect kids from Jimmy Savile is revolting, but it’s hardly the beginning or the end of their disinterest in violence against children.  Certain children, anyway.  The keepers of Pudsey are strangely uninterested in the child victims of powerful and influential people… be they depraved DJs or depraved states that happen to be Western allies.

For instance, as I write this, the state of Israel – a brutal, aggressive, nuclear armed, apartheid state which is mysteriously supposed to be less of a threat to world peace than Iran – is murdering Gazan children.  (It does no good, by the way, to trot out that old chestnut about them not deliberately aiming at the kids… if you get a machine gun and spray bullets blindly into a school, it’s no good later claiming you were only trying to hit the cigar-smoking TV personality lurking in the corner.)

This is nothing new, nor is the BBC response, which is as routine as it is pusilanimous.  Indeed, cowardice in the face of the powerful Israeli lobby (not to mention the backing Israel gets from the USA and our government) is the most charitable interpretation.  A less charitable – and probably more accurate – interpretation would be that those BBC content providers covering the ‘conflict’ in Gaza are unaware of the way they are loading and slanting their words. 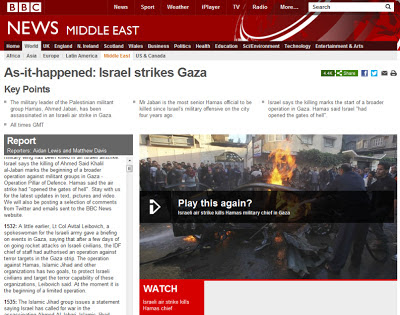 Note that the ‘Key Points’ are all to do with the so-called ‘targeted assassination’ of a Hamas leader.  Note the phrase “militant groups”, presumably including Hamas, a democratically elected party.  Note the prominence given to Israeli officials, who are allowed to frame the Israeli operation as being aimed at “terror targets” in response to “days of on going rocket attacks on Israeli civilians”, the aim being to “protect Israeli civilians” (the only civilians who matter, or even exist, apparently).

No mention of the Gazan civilians, including young children, slaughtered.  Can you imagine how differently the page might read if the Palestinian rockets had caused any comparable damage to Israel, or if Iran had bombed somebody and caused as much suffering?

This one from today too: 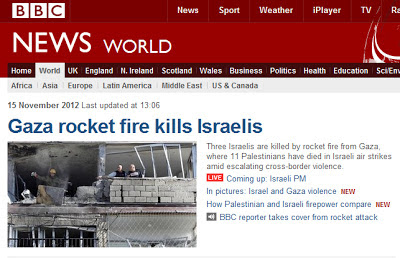 Here’s the headline.  Note the relative sizes (and thus importance) given to Israeli and Palestinian deaths… bearing in mind the ratios and the fact that Israel is immensely better armed.  Notice the decontextualised way the attack becomes “cross-border violence” in line with the BBC’s usual way of depicting Israel/Palestine as a two-tribes-squabble issue, rather than the brutal domination of a subjugated captive minority by a powerful state.

Yesterday, the blog Electronic Intifada published a “statement from international academics who recently particpated in a conference on linguistics at the Islamic University of Gaza which decries major media outlets’ failure to report on recent killings of Palestinian civilians by Israeli forces in Gaza.”  The statement spells out the issue far better than I could, and takes in the BBC’s role as peddling the unbalanced and dishonest message. …