“That's my evil twin who's doing that. We've got to stop him!”: Datalore 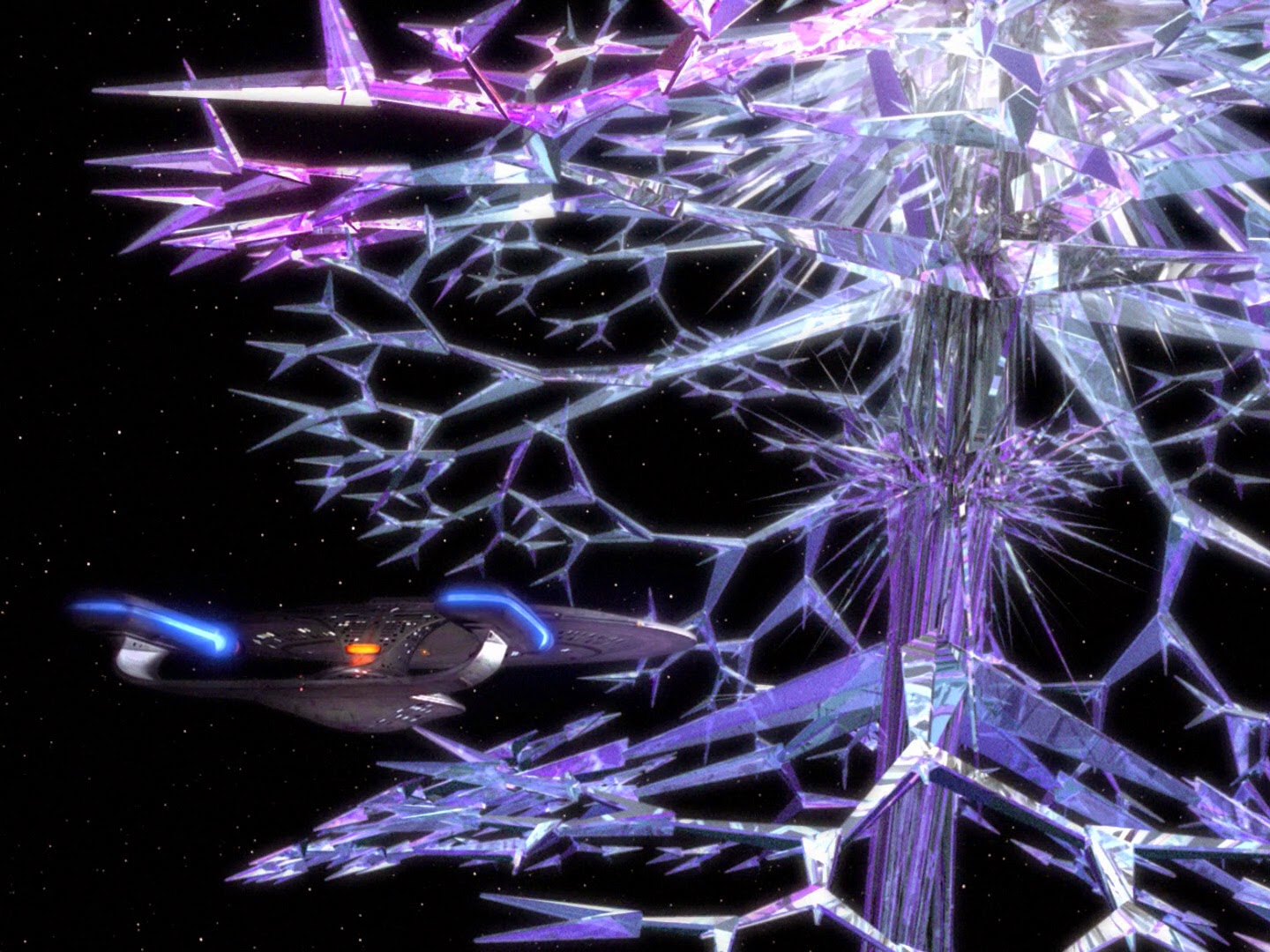 Almost as iconic to my memories of Star Trek: The Next Generation and the timespace it inhabits as Data is his brother Lore. I always found him to be one of the great antagonists of the show, even trumping the Borg. It's him who I think of along with the Klingons, Romulans and Ferengi as people the Enterprise would frequently and regularly come into contact with, and the two-part episode “Descent”, in particular the climactic scene where Data debates Lore in a darkened, bombed out corridor before shutting him down, is permanently burned onto my psyche as one of the show's most legendary and unforgettable moments.

As a result, this episode, Lore's first appearance, is always one I eagerly look forward to rewatching whenever I revisit Star Trek: The Next Generation's first season...And it's one I'm always profoundly let down by. Most recently, this happened when I was trying to introduce my sister to the show as I excitedly talked up how cool Lore was, how brilliant Brent Spiner was in the role and how important a role he played in my personal history with the series. After I put the Blu-ray on and we'd seen it, my sister and politely, yet firmly pointed out that, no offense, but “Datalore” was crap, the evil twin story was precisely the sort of artificial conflict we both hate in scripted drama and Wesley Crusher rendered the whole thing essentially unwatchable. She's right, of course: There are a few episodes of any show that really aren't very good, but you have to begrudgingly recommend to a new viewer because they lay the groundwork for later, far superior story arcs. Unfortunately, the very best I can say for “Datalore” is that it's in that category.

“Datalore” is actually Gene Roddenberry's final contribution to Star Trek as a writer and, well, it shows. This is absolutely the worst Wesley has been yet, and it's impossible *not* to lay that at Roddenberry's feet. He's obviously responsible. And, all the usual criticisms of Roddenberry's style of writing apply here too. I'm not sure if it's better or worse that Data's origin is established to be on an old Earth colony as the creation of an eccentric human inventor instead of “unknown aliens”, but that's definitely the case now. At the very least it gives Brent Spiner a lot more to do in the future, so that's good (though interestingly, Noonien Soong was originally supposed to be played by Mike Okuda. Seriously. That would have been cool in its own right). However, the one part of the script we can't blame on Roddenberry is its stock nature: The idea to make “Datalore” an evil twin story actually came from Brent Spiner. In the original script, Lore was apparently going to be Data's twin sister, a good android who was even going to join the crew to do mechanical work in environments humans couldn't go, like the exteriors of starships.

I'm not sure if Data's sister was always going to be named Lore, but, if she was, this does of course open up a raft of unpleasant gender essentialist concerns. “Lore” is in many ways the opposite of “Data”, the latter being measurable, quantifiable results of scientific inquiry while the former is accumulated tradition and folk wisdom, little of it being “rigid” or “scientific”, most of which tends to contradict itself. Put crudely, data tends to be the province of “hard” (horrible people would say “proper” science), while lore is the domain of the humanities and, well, oral history. Given the way the humanities are stereotyped as being feminine pursuits, It's not terribly difficult to see how someone of a more limited and provincial viewpoint might say data is masculine while lore is feminine, and this is absolutely something I could see Gene Roddenberry slipping up on. Even if he had the best of intentions, which I'm sure he did-He probably looked at the show and decided there needed to be more female characters to balance out all the men and thought someone like Lore would offer a perspective the Enterprise had thus far been lacking.

And she would have: I can think of lots of ways someone like the original Lore could have helped Star Trek: The Next Generation. The idea of a female android who has emotions, tells stories and does working-class jobs around the Enterprise is one that simply brims over with exciting potential to me. Just off the top of my head, I can see her providing a fascinating mid-point between Data, Geordi and Commander Riker and being someone who would have gotten along positively swimmingly with Doctor Crusher and Captain Picard in later years. She might even have been able to fill the role Tasha Yar failed to, and that's not even getting at how she could have served as a deconstruction of the traditional fembot of the sort the Original Series itself engaged in on more then one occasion. Most typically, fembots are patriarchal domination fantasies for misogynists looking for their ideal woman: A woman who is literally a commodified and servile possession. Lore would have been the opposite of that: A female android who is a daughter, sister, friend and colleague and treated as such.

(Speaking of commodification, a savvy writer could also use a character like this to comment on the sorts of things robots and artificial intelligence are created for in the real world. Again, many storytelling opportunities present themselves to me.)

But on the other hand, the inescapable gender essentialism of Lore's origin would have hung over her for the rest of her life, possibly threatening to overshadow everything she did. It would have been a clear-cut example of Star Trek's frustratingly signature two steps forward, one step back approach. Not that what we get is any better, mind you. Making Lore an evil twin of Data now implies that oral history isn't just inferior to quantitative information, it's actively dangerous to it. Obviously I'm drawn to the oral tradition and obviously this upsets me, but, despite what you may think, I don't hate science: I think there's a place in the universe for both things, and that really they're more similar then science wants to admit sometimes. At least when Lore was a girl, there was no indication Roddenberry meant there to be any value judgment to be made about this: It was simply that one sibling did one thing and the other did something else (although I've also heard Lore was going to be Data's love interest as well, in which case ew). With Lore a brother, and an evil one to boot, it's pretty hard not to take a value judgment from it.

The reason for the change is clearly because Brent Spiner felt like playing a psychopath that week, so he approached Gene Roddenberry for a rewrite. Not that I entirely blame him: With the utmost respect to the man, he's an absolute ham and I can imagine playing an emotionless android (although actually, whether or not Data is supposed to be emotionless at this point is an interesting subject for debate) would have started to feel pretty frustrating and limiting to someone who's that much of a performer after awhile. And, naturally, Spiner is electrifying in the part, making Lore instantly memorable from the very beginning. He's a classic “love to hate” sort of character, and the wonders Spiner pulls with the double act here more than explains why Lore gets brought back as a reoccurring villain. He's absolutely delicious. More importantly, it lays the groundwork for Spiner to break out of his usual role to do more clever and exciting things later on in the series.

Which is really as apt a metaphor for “Datalore” as I could hope for (see? Wordplay. It's not scary). The episode itself is garbage, with the notable exception of Brent Spiner's acting and, of course, the Crystalline Entity. But it sets a lot in motion that will pay off in huge dividends later on: If nothing else, “Silicon Avatar” and “Descent” are both brilliant. And, like so much about Star Trek: The Next Generation, Lore himself, or should I say herself, gets me thinking about many different possibilities and ideas. If the majority of them turn out to be things I'm projecting onto the show and extrapolating from my hazy 1980s memory, well, so be it. That's my lot in life, after all. Share on Twitter Share on Facebook

Just finished Datalore having read your blog beforehand. Back when I used to watch a lot of Next Generation in the 90s (I video taped them on broadcast and managed almost a complete collection) I always liked this episode and thought of it as the point where the first season kicked up a gear.

Looking back on it decades later and with the benefit of your blog I see all the Roddenberryisms that you have pointed out over the course of your voyage such as his love of military protocol. The Enterprise seems more like a military ship when Roddenbery is writing. It also felt like Picard was being written as the slightly harsher and short-tempered version Roddenberry wrote in Farpoint and Patrick Stewart seems to go out of his way to play against that, giving his warmest performance as Picard that I think I've seen so far in this run through.

There were also other links to Farpoint with an overt mention of the "no Captains on away teams" rule and a nod to the explanation of the holodeck's ability to create living patterns such as trees. Points that, while followed by other writers, had been happily left unsaid (as far as I remember) since the pilot. It left me feeling that rather than being the beginning of the future of TNG that I used to consider it, the episode was actually an odd throwback.

Oh yes the highlight of this indeed is Spiner's acting.

And you know, based on my comments of the last essay - go into the Black Box and Lore can be any gender you choose.