“...the most offending soul alive”: Sins of the Father 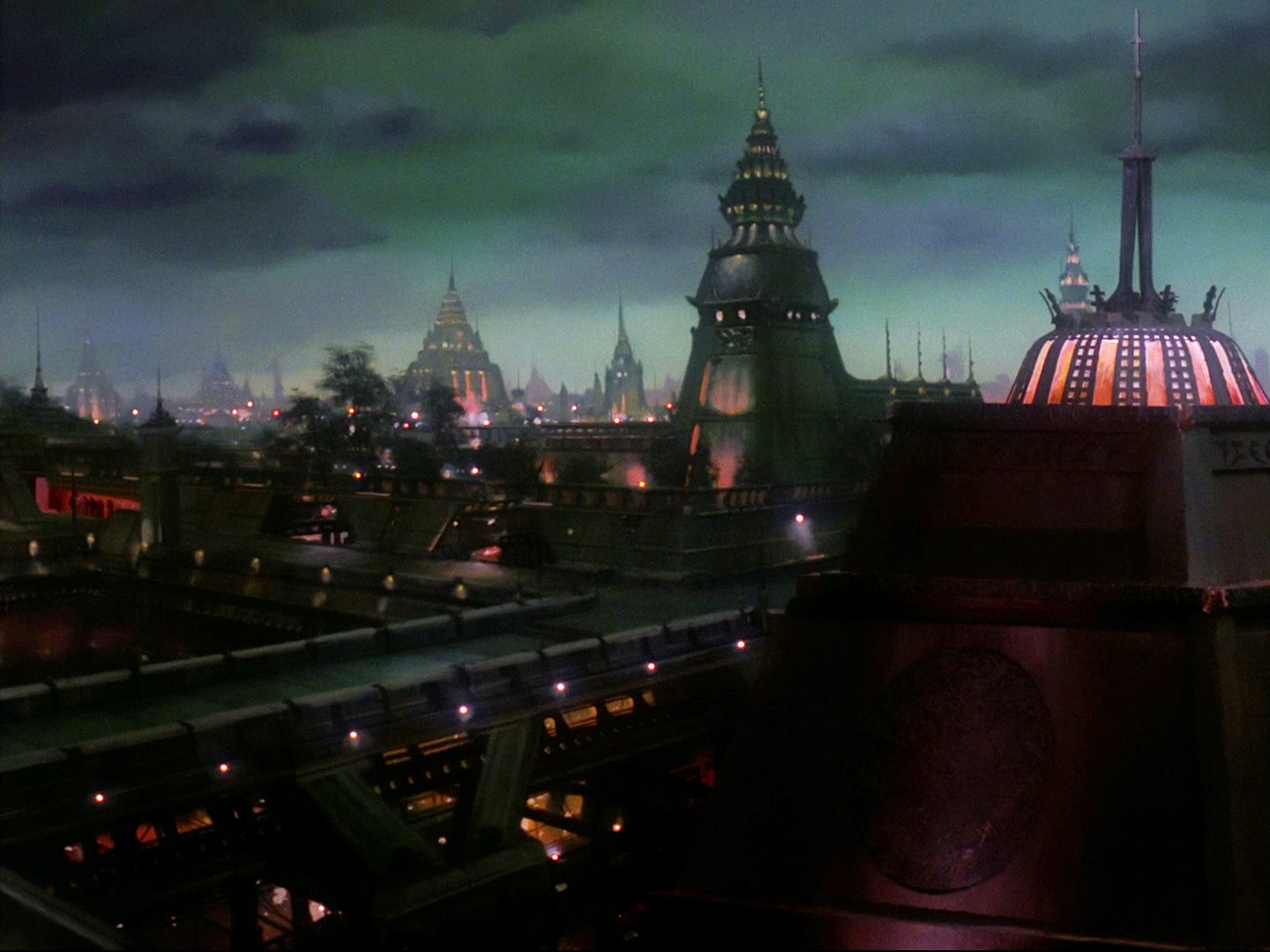 What “The Enemy” was for the Romulans, “Sins of the Father” is for the Klingons.

This episode is frequently held up as an important turning point for the series and rightly so, as it defines a lot about what Star Trek: The Next Generation (and Star Trek: Deep Space Nine too, for that matter) is going to look like going forward. But “Sins of the Father” is also the kind of episode that's exceedingly difficult for me to write about as it's been extensively analysed and historicized by just about every major publication to cover the franchise. This is the kind of episode I hate because it leaves me with perishingly little new erudition to add to the glut of discourse that already exists. Yes, yes, this episode sets in stone pretty much everything we think of when we think of Worf and the Klingons, yes it's a strong character piece and yes it's a major step in the development of more explicit serialization in episodic Star Trek. Yes, the award-winning set design and matte paintings are all gobsmackingly good. And yes, it sets up “Redemption”, about which I have a lot to say, but I'll save for the fifth season. That's all true to be sure, but it's also blindingly and bluntly obvious to the point I don't even think it's really worth taking the time to talk about.

But then what is there left to say about an episode like “Sins of the Father”? I could be my usual grouchy self and dispel some myths about the backstage stuff: This episode is frequently touted as being the moment where real characterization, serialization and world building was introduced to Star Trek: The Next Generation. Which would be true except for the minor fact it does none of those things. Maybe it's just me and my judgment is clouded by over 25 years of familiarity with this show, but I haven't had a hard time piecing down who people like Captain Picard, Commander Riker, Geordi or Data (or, much as I hate him, Wesley) are so far. The only characters who did seem to lack a bit of detail were Doctor Crusher (who got better) and Tasha Yar (who isn't around anymore to complain and thus doesn't matter anyway). So then the argument goes this is the first time a so-called “second tier” character like Worf got a large-scale story arc all to themselves, which would be a fine argument if you chose to conveniently ignore “Heart of Glory” and “The Emissary”. Yes, those particular story threads weren't ever fully developed on after those episodes, but that doesn't mean they wouldn't have been had the creative teams that worked on them stuck around for longer than one season apiece.

Then there's the argument that “Sins of the Father” was the first episode to introduce serialized, arc-based storytelling to Star Trek and that this was manifestly a Good Idea. I'm going to leave aside the second half of that argument for now: I have some pretty strong feelings on it, but this isn't the time for me to rant about them (for now, all I'll say is once again take a gander at Dirty Pair). Regardless, the fact is this statement is plainly ridiculous-The Star Trek film series was nothing if not an attempt to revive the film serial narrative structure and the whole deal with the Borg has been pretty damn obviously a long-term story arc (albeit something of a clumsy one due to production issues). This gets at a confusion that seems to exist over what people think Michael Piller did as opposed to what he actually did: Piller didn't shift the focus of Star Trek away from voyaging, planets-of-the-week and utopian idealism to character interiority, he showed people how character interiority could be used to further and emphasize utopian idealism. If you think I'm talking nonsense, go rewatch the story he wrote to kick off the supposedly conflict-ridden, character focused station show that everyone thinks deconstructs the concept of the voyaging starship. It'll be an education, I assure you.

No, “Sins of the Father” isn't a Michael Piller story. What it is instead, plainly, is a very, very Ronald D. Moore story. Which makes sense, as it came about due to Moore becoming the go-to Klingon and Romulan guy. Piller knew Moore was a rabid Original Series fan and asked him to draft up a memo about what he thought Klingon and Romulan society was like and what the defining aspects of their culture were. And so, when a bunch of stories started coming in about Worf and the Klingon homeworld, Moore was given the task of stringing them together. What happens as a result is that Ron Moore's idea of what the Klingons are like becomes codified as the official one, which isn't a bad thing in and of itself inasmuch as *somebody's* idea of what the Klingons are like had to become the official one at some point, but Moore's conception of them does belie his positionality as a Star Trek fan in ways that are not always entirely flattering.

The Klingons of “Sins of the Father” are all proud, pseudo-Vikings obsessed with honour only as it pertains to death and Glorious Combat. They're ruled by a High Council of grizzled old warriors, and yet there's a lot of corruption in the ranks and cloak-and-dagger politics going on to keep the Empire's old skeletons firmly closeted. And that's all well and good, except for the fact it's, all things considered, kinda boring, especially when compared with what John Meredyth Lucas would have come up with had “Kitumba” been made (seriously, Maurice Hurley-I will never understand why of all the Star Trek Phase II stories you could have gone with you picked “The Child” and “Devil's Due” instead of the clearly superior “Kitumba” and “Practice in Waking”). This is all standard issue dark, complicated realpolitiking and dark, complicated realpolitiking that our characters have a personal investment in is visibly a hallmark of Moore's even at this early stage in his career.

And the thing about this, as well as that aforementioned fascination with serialization, is that they're both *also* hallmarks of Nerd Culture. Obviously mainstream audience can enjoy story arcs (Miami Vice had a number of ones that were well-regarded, don't forget) but only Nerds give a shit enough about their fictional worlds to want to get deeply invested in ridiculously dense and complicated unfolding narratives about empire building and galactic politics. And the problem with *that* is Star Trek: The Next Generation starting to court Nerd Culture is an *incredibly dangerous* move for it to be making, especially given what's going to happen in just a few months. The blunt reality of the matter is, Wesley Crusher aside, Star Trek: The Next Generation is a *mainstream hit*, not a cult one and the people in charge of the Star Trek brand (albeit with the major exception of Michael Piller himself) aren't used to that and don't know how to deal with it. This is, if you recall, the exact same out-of-touch lack of understanding of where the audience is that made Star Trek V: The Final Frontier such a hot mess. This is gravely concerning, as Star Trek: The Next Generation is never going to stop getting consecutively more and more popular.

Thankfully we know that Star Trek will continue to enjoy its admittedly unprecedented mainstream success for the time being in spite of missteps like this, at least as long as Michael Piller sticks around. Perhaps a more interesting topic of discussion then is what, if anything, the portrayal of the Klingons here and how they're compared to the Federation and the Enterprise crew can teach us about what the show's conception of its utopianism at this point in time. After all, this is the version of the Klingons (and Worf) that sticks with us for time immemorial, defining almost every single story to feature them from now on. Unfortunately, apart from a rather minor and frankly kind of facile reading that this story reinforces how Worf's true home is the Enterprise and that our people once again have the moral high ground and are the role models to emulate, I can't find anything more to parse out of this. Which of course makes sense, as Ron Moore famously does not give a toss about utopianism.

In regards to “Sins of the Father”, Even Michael Dorn acknowledges it as marking a turning point for Worf. And yet he remains guarded, saying


“There was a lot more involved in it than the writers realized. Things that have to do with Klingon loyalty and honor. They didn't give it its due. You look at Worf in a different light, and I've played him in a different light since that episode. This is not something they have come up with. I'm doing this on my own. Hey, it's their fault. They wrote it. So now, I'm going to carry on with it.”

"And that's all well and good, except for the fact it's, all things considered, kinda boring, especially when compared with what John Meredyth Lucas would have come up with had “Kitumba” been made (seriously, Maurice Hurley-I will never understand why of all the Star Trek Phase II stories you could have gone with you picked “The Child” and “Devil's Due” instead of the clearly superior “Kitumba” and “Practice in Waking”). This is all standard issue dark, complicated realpolitiking and dark, complicated realpolitiking that our characters have a personal investment in is visibly a hallmark of Moore's even at this early stage in his career."

I find it a big shame that they went down this route with the Klingons, as for me they have fallen into being a rather generic, comedic (unintentionally!) and one-note race.

It would have been amazing if the revelation in Kitumba that the Klingons were not an entire race defined by warrior-ship, but that their warriors were but one faction.

Also, I think I like it when I was younger, but the desire for doing "darker" or "more serious" stories just gets kind of dull I feel and in the end has writers and producers manipulating and contorting characters into moulds that don't fit them.

In the end I always end up thinking, well what about the Klingon hairdressers, dentists, artists, etc - surely the have some basic functions that their society needs to operate that are not based on honour or battle?

The last thing you want is a Klingon bus driver who is thinking "this would be a good day to die".

... or feels dishonoured when you don't give the correct bus fare.

Also, I notice they make an effort to show gender equality among the Klingon ranks, and yet it's still a sausage fest at the top levels. Apparently even Klingon society has a glass ceiling.

Has there ever been even a female Klingon ship captain? I can't think of any (the Duras sisters don't count). Even the Romulans have female ship captains.