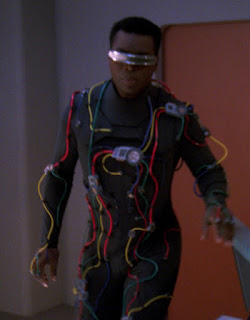 Is it bad I can't remember what this episode is called? I've literally had to go look up how the title is spelled three times since sitting down to write this.

Over the course of this project I've noticed Star Trek: The Next Generation takes a roughly annual delight in a sub-genre of story I've decided to call “Let's Torture Geordi”. Ever since the third season (hmmmm) the show, for want of anything better to do with Geordi La Forge, decides to put him through an increasingly mean-spirited and downright ludicrous series of wringers more or less because they can. This team has, in turn, given him a neurotic complex he never had before, turned him into the creepiest human being imaginable by having him get it on with pretend women, forced him to mutate into a neon sea slug and had him brainwashed into a killing machine by his batshit insane murderous alien ex-girlfriend. Even Michael Jan Friedman is not immune to the fun, writing the two-part story “Seraphin's Survivors”/“Shadows in the Garden” about Geordi acting uncharacteristically defensive and oversensitive when his childhood friend/lover comes aboard, thus blinding him to the fact she's a space vampire who eats people. A few issues later, he had Geordi entranced by space mermaids in “I Have Heard the Mermaids Singing” and almost blow up the ship in his reverie.

All in all, sounds like an eminently respectful and legitimate, serious grown-up series of dramatic performances to give to LeVar Burton, national treasure and cultural icon who reads to children on Reading Rainbow and played Kunta Kinte on Roots.

“Interface” or “Interphase” or “Whatever The Fuck It's Called I Don't Give A Shit Anymore” is the episode I would call the requisite “Let's Torture Geordi” outing for this season, although we got a nice preview in “Descent, Part II' when Doctor Frankendata sticks strobes in Geordi's forehead and tries to infect his brain with the Replicators from Stagate SG-1. It's two half-assed stories stitched together into an even more half-assed whole: The first a bog-standard mid-90s virtual reality piece and the second a look into Geordi's family history. Which, this team being this team, we have to explore by brutally killing everyone off and watching drooling, leering and slack-jawed as Geordi bears his grief for us, publicly retreating into his own mind and memories in the vain, desperate hope to be able to feel something again.

This was not an episode I watched at the time, and thus isn't one that contributed anything to the mental landscape Star Trek: The Next Generation inhabits for me. The only thing I remember is the ridiculous-looking interface device itself from a shot in a magazine somewhere, and that I kept confusing it with the equally bullshit mind-control contrivance from that stupid fucking Manchurian Candidate story with Commander Sela from the fourth season. You'd think, with this episode being about inner worlds and psychology and everything, themes I've often gone on record as praising in this season, this would be right up my alley. But it's not. This is just shit. Actually offensive shit that makes me legitimately pissed off and angry in a way this show has actually avoided doing for quite awhile. Ron Moore says the problem with this episode is that it's a story about Geordi's family and is thus boring, and that because of this it marks the point where everyone realsied the show was out of ideas.

As usual, Ron Moore is wrong. “Interface” isn't bad because it's a story about Geordi's backstory, it's bad because it's a story about Geordi's backstory that's cruel and heartless and boring and sucks. And furthermore, what, may I ask, was wrong about telling a story that fleshes out Geordi's family life? I thought this show loved itself some character drama and character development. This show has done it for every other character on this show, frequently at the expense of literally anything fucking else. It spent three interminable years stretching out goddamn Worf's story so much that it now less resembles a Greek tragedy so much as it resembles a first-draft parody of a Greek tragedy written by a screeching idiot. So it's OK to make a cartoon mockery of Worf and Captain Picard's family history, but when they do it for Geordi it's a boring and unnecessary bridge too far?

I could make some argument about how the continual shafting of Geordi is indicative of how there is something cripplingly, seriously wrong with this creative team and their conception (or to be more accurate, complete and total fucking lack) of what Star Trek: The Next Generation is. But honestly, I can't be bothered anymore. I'd just be repeating arguments I've made a million billion times before. I've moved beyond disappointment and apathy with this franchise's source material to being actively angered and repulsed by the consistent stream of cack-handed incompetence, laziness, childishness and outright disingenuity that goes on behind the scenes of science fiction. There's probably one, two, maybe three actually legitimate writing talents between everyone here, and the fundamental problem is that they never coalesce into a unit frequently enough. And that's before you get to the fact it's demonstrably clear that neither the studio nor the fans have the slightest idea what they're doing with a property like this.

Star Trek: The Next Generation provides a world of ideals for us to observe, but those ideals actually have to be lived up to. We actually have to take it upon ourselves to work towards living up to the standard the series is trying to set, otherwise there isn't one single, solitary point to this. To any of this. It's long past the time for Star Trek to put up or shut up. There's only so long it can sit sanctimoniously upon its high horse and preach at us when it's abundantly clear it has no intention of practicing any of that itself. I'm writing this in the 50th anniversary year of the entire franchise, and not once throughout that half-century has Star Trek ever reliably, consistently and provably lived by its own example.

Josh, I think you're in serious danger of burnout here. I'm not sure you'll survive once you're waist deep in late-DS9 grimdark.

Unless you can take a firmly ironic stance on the whole issue once DS9's war arcs really heat up. Or maybe concentrating on how the optimism of Star Trek's underlying utopian concept keeps shining through the madness of the last half of that series.

I liked this episode slightly more than you did, but not by a whole lot. I don't look at it with the absolute rage that you seem to. Instead, it's a story of sadly unrealized potential.

Interface could have been a great story. It would begin as a trippy little piece of high-concept sci-fi about Geordi's union of human and machine with the way they shot his control of the probe. Given Geordi's explicit reliance on his VISOR to see, there could be many weird little thematic parallels between how Geordi relates to the probe as an extension of his own perceptual technology.

Then we get the sidewinder of Geordi's losing his mother in such a traumatic fashion – with the emotional distance of a Starfleet report. It could have been a story where Geordi is the teacher who's now in need of emotional guidance, but isn't sure where to find it, especially once the aliens start messing with his head through the illusions of his mother that appear through the probe. It could have been a touching story about overcoming personal trauma and pain to properly grieve.

But instead we got this sloppy script. Ah, well.

And this is why Dustin is right. That's a tack that, quite frankly, I have no excuse for not catching.

Granting that the next few episodes went dramatically smoother for me and I'm approaching one of my favourites ever ("Phantasms"), I'm in no position to disagree. The constant disappointments have done little to alleviate the stress I've been going through elsewhere in my life. I've got just enough energy and motivation to see it through to "All Good Things..." I think, and I've got some really exciting things planned for immediately after. Beyond that though...It's probably about time to restructure this endeavour.

I should probably outline this further in this year's anniversary post, but part of the reason I've been far harsher on TNG than I wanted to be (and frankly than is healthy for me) is because I *don't* want to spend four seasons going through all this in the Dominion War section. Because all the Dominion War is are the worst impulses of TNG and DS9 gone unchecked and left to run rampant over Star Trek. I was hoping if I got the grimdark critique out of the way first, I could spare myself a lot of pain and anguish later, freeing myself up to take a different approach. I knew this was coming and tried to plan for it the best way I could at the time.

Maybe that wasn't the right call to make.

If it's any consolation, this is a sentence that really desperately had to be said and thank the Prophets I'm not the only one who feels that way.

"[T]his is a sentence that really desperately had to be said and thank the Prophets I'm not the only one who feels that way."

Absolutely. What I value most about you, Josh, is your determined attempt to push back against an ossified fan consensus (TNG S1 sucks, S3 is its peak, DS9 is peak Trek and the Dominion War is peak DS9, etc.) It's incredibly important that there be fan voices that actually take this show's oft-disparaged values seriously.

However you want to handle the future of this site, Josh, I'll be reading. Take care of yourself.

The introduction of excessive family members in the final season was a sign that TNG was running out of ideas, but I'm more inclined to think that that problem reared its head more obviously in the episodes with Worf's brother and Data's mother and Crusher's grandmother and Troi's sister AND Picard's son (well, son-ish) than the one about Geordi, who unlike the others never had any pre-existing family on the show. Let alone family members in Starfleet, which is somewhat surprisingly unique among the ensemble.

"However you want to handle the future of this site, Josh, I'll be reading. Take care of yourself."

I'm with Dustin. Whatever happens I will be reading and supporting you. Just change the journey ahead to suit how you feel now - you can do this any way you want to, make it fun for yourself again.