“We are all stories”: Darmok 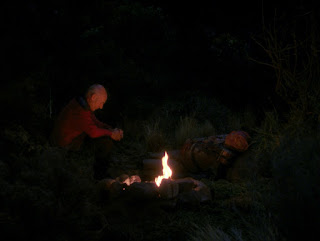 Shaka, when the walls fell.

We have time again before the solar tide turns. What would you like to hear? I'll tell you the oldest story I know. Two women, alone on a beach, around a fire.

And then it began again. Leah walked with starlight. She makes her rounds across the sky every night, just as she always has, and you can see her if you gaze into the heart of the galaxy. Captain Picard came to her and asked if he might walk as she did, and the two set off together telling each other stories. Captain Picard asked Leah “Please tell me about the stars”. But Leah spoke in the language of dreams and memory, not of tongues, and couldn't rightly answer Captain Picard's question to his satisfaction. But Geordi La Forge, a wise and clever man who could see beyond into The Way Things Make Themselves Appear, understood Leah and spoke words to represent the things she had dreamed. “It's like the stories we were told long, long ago,” Geordi would say. “The stars are our ancestors, and they've seen all these things before. We turn to them and become them in order to live our lives, for they have lived them before us”.

Geordi could see that appearances were not deceiving and that facsimile was not trickery. He knew that wisdom lay within learning to love the beauty of the show, but these were thoughts that troubled Data, son of data. “I do not understand, Geordi. My programming indicates that there is Truth, certitude, and that there is then Illusion, unreality. I shall endeavour to Change My Own Name to compensate”. “That's Bynar comfort, D. The truth is in the telling: It's all how you look at it”. “But, if I observe a thing, does that not indicate that the thing does in fact tangibly exist?” “Exactly”. That was the story of how Data learned to create reality. There's more to the story, but that's for Another Time. You probably want to hear more about our stars.

This is the story as I know it, you have to understand. Every storyteller has their own being-becoming, and this is mine. But I don't think you mind. A long time ago, when the world felt new again, we looked to the stars to guide our course. We were one in those times and lived waking dreams that played out into infinity in all directions. If you look up at the stars tonight, maybe you can feel yourself reconnecting with a part of you and I that exists in another timespace. Can you? Invoke not just your memory, but your memory of existing as a memory. Do you remember that we used to talk through the energy of the visions we beheld? Can we couple once more with that which we used to see, and The Way We Used To Be Seen? This are the questions Captain Picard wanted The Answer to. Geordi and Leah consulted for awhile, but the best they could come up with was the story of somebody else.

Leah pointed to two stars in the sky around them. Geordi said that these were his favourite stars, because they were angels of Love, and that they were named Kei and Yuri. Data, son of data, dutifully pointed out that the myth corresponds to a binary star system in the Sagittarius sector. Long ago Kei and Yuri were great wise women and warriors who knew Love and Thought, and they too looked into the night sky. One day, Kei and Yuri travelled to a dream world where they found the Cosmic Egg, which had five names. Wearing their First Masks, Kei and Yuri adopted the Cosmic Egg as their own, and as it hatched it brought forth from within transcendent source energy, which was theirs. I Am We Are All One in this moment.

From then on and from before, Kei and Yuri too walked among the stars, together forever in a world that was theirs. This story was ours too, explained Geordi, because when we look to the stars we see our own true selves whom we also Love. Those who came before are also those who we are being-becoming within the realm of lucid memory. At least, this is how the story always goes. Which it does, because the story will begin again after the last end. To know our memories is to know ourselves is to know the world we bring forth from ourselves. The truth lies in the telling. This one is called “Darmok and Jalad at Tanagra”. What does that mean? “Darmok and Jalad...They left together”.

Darmok and Jalad at Tanagra. Picard and Dathon at El-Adrel. Kei and Yuri at Chakra. Vaka Rangi on the Ocean. Leah and Geordi in the night sky. Kei and Yuri, alone on a beach, around a fire.

Look there-Can you see it? Two stars shining bright in the sky. Do you remember? I can't seem to forget myself. We're together in this moment-I want to become this way forever. Let's go back to the house of stars.

You made me want to watch this again.

It's often been seen as the anti-'Arena' from TOS, hasn't it? Or rather, a subversive quasi-remake.

I remembered not liking it as a boy.
I remembered how that changed as a man.
We're all on the ocean.

Stars above, stars below and hills surround.
Campfire light bathes our faces.
Truth in the eyes of the teller as we sail across the sky.