“What Are We?”: Inheritance 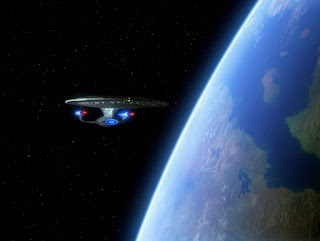 Last week on Star Trek: The Next Generation we talked about the counterintuitive reality that Star Trek is at its creative peak, yet has also run out of ways to tell Star Trek stories. And last week on Star Trek: Deep Space Nine we talked about how I've reached a critical impasse with accepted discourse surrounding the show. What I want out of Star Trek and what other people seem to want out of Star Trek are two completely different things, and it's this episode that finally clarified it all for me.

Basically, I seem to like Star Trek best when it's being anything other than Star Trek. “Inheritance” is not a Star Trek story, not really, but it's exactly the kind of story this show should be doing.

Near as I can tell, “Inheritance” has a reputation 'round about that of “Dark Page”. That is, everyone hates it except me, and I naturally love it. “Inheritance” seems to get a lot of the same criticisms levelled at “Dark Page” too, namely that the story is predicated on a heretofore unknown bit of backstory for one of the main characters that strains credulity beyond the breaking point. And my response to that line of argument this time is about the same as it was then: I don't understand how you can claim any sort of backstory development for a character in an episodic television series in unbelievable (certain Cousin Oliver-type panderings possibly excepted), because in polyauthored episodic television backstory is by definition created cumulatively. It's not that far-fetched to posit Doctor Soong had an assistant who he fell in love with and who, consequently, served as Data and Lore's “mother”. At least, it's not any more far-fetched than some of the other stuff this franchise expects us to swallow from time to time (like, say, I dunno, an arbitrary Warp 5 speed limit). And it should be noted “Inheritance” seems to be aware of the reception “Dark Page” got and hedges against it, with Data being highly suspicious of Doctor Tainer's story until the climax: It's almost as if Data himself is standing in for a fickle, easily bored implied science fiction audience.

(There's some potentially worthwhile ground to be covered in exploring that metaphor further, especially in lieu of what this story reveals about Data's character, but I don't much care to pursue it.)

Aside from being a genuinely sweet, touching and astonishingly well-acted character piece (shout-out to the incredible Fionnula Flanagan, who plays Juliana Tainer, fresh off her equally outstanding stint on Star Trek: Deep Space Nine as Enina Tandro in last year's “Dax”), I really love the idea “Inheritance” raises that all of Data's positive qualities, his creativity, inquisitiveness and affably polite demeanor, come from a female role model: His “mother” instead of his “father”. Not that Star Trek: The Next Generation has necessarily valorized Doctor Soong-There's always been some darkness lurking around his paratext. But equally, there have been moments where that story has taken on a whiff of The Great Man and His Works about it, and “Inheritance” is a much needed counterbalance to that. Every single revelation about Data's childhood and Juliana's involvement in it is eminently believable, bringing to light what we always suspected about Doctor Soong: That, while a genius, he was an insular one mired in patriarchal self-aggrandizement. A racial purest in all but the most technical of distinctions.

Also believable is Juliana's difficult early relationship with Data, and the guilt she now feels about some of the choices she made back on the colony. Seeing Data having grown into such a mature and successful person makes her feel terrible for doubting, even fearing what he could have become as a child. But she was entirely within her rights to be nervous, because we all know Data and Lore are really not that different (“Descent”, “Gambit” and “Phantasms” all point to that just this season alone), and he could have ended up just like Lore had a few things in his life not gone the way they did. Fortunately, it seems a lot of those things that helped make Data Data were due to savvy intervention from his mom Juliana. Amusingly overbearing as it's supposed to be, it's the nudity conversation in engineering that really cements this for me: Naturally young Data, convinced as he must have been that he's a superior life-form, would think, “logically”, that the concerns and norms of society-at-large should not apply to him. And naturally it would have to be a woman to point out to him that no, they actually really fucking do.

And the cherry on top of the sundae is that Juliana wanted to make Data female.

Normally, the twist that Juliana chose to leave Data behind during the attack of the Crystalline Entity because she was afraid he might turn out like Lore would elicit some grumbling from me about conflict-for-conflict's sake being dragged out to add drama to an episode that was otherwise coming across too feelsy and fuzzy for the fragile masculinity of science fiction fans (Star Trek: The Next Generation 365 even *literally describes* this episode as “touchy-feely”), but in the context of “Inheritance” this is actually really well done. And furthermore, it adds some cleverly subtle ambiguity to the climactic decision Data must make about whether or not to tell his mother that she too is an android. Because Juliana's rationalization is not that she values biological life over mechanical life, but that she was afraid for Data and for herself. If anything, it's Soong she didn't trust. This raises the interesting question of whether or not she would have minded learning that she herself is an android: Presumably, her experience with cybernetics and her android children would have led her to view her own android existence as one that's inherently meaningful and worthwhile.

(I also like how this plot twist is subtly built to over the course of the story, and the implicit callback to Data's old fascination with Sherlock Holmes as a lens to explore his identity: He uses classic deductive reasoning to figure out Juliana is an android, complete with the dramatic flourish reveal at the climax.)

There's actually something of a potential plot hole here, because Holo!Soong tells Data that he write a subroutine into Juliana's positronic matrix that would cause her to self-terminate if she ever learned the truth about her existence, and yet this doesn't ever get addressed during the conference in the observation lounge where Data is debating what to do with Captain Picard, Doctor Crusher and Deanna Troi.One would assume that for purely pragmatic reasons at least the choice not to tell her would seem obvious, but maybe that's what Deanna was referring to when she was talking about how the shock might irreparably harm Juliana. Then the question becomes though whether or not Deanna's second argument, that telling Juliana the truth would deprive her of the same thing Data has been striving towards his entire life, that is humanity, is right either. Because another deceptively clever thing “Inheritance” does is neatly and decisively resolve the Blade Runner-style personal identity problem, and it does it almost as an afterthought: Holo!Soong is right-By any reasonable standard of measurement, the android Juliana *is* Juliana.

But she's not human either, she's Human+. She's a human who was able to harness her latent potential to become something more, and that's wonderful. This is where Star Trek's annoying anhtropocentrism rears its head again, because this is a more accurate description of what Data actually wants, not “To Be Human”. So it's not entirely clear that (again, barring that self-termination subroutine thing) it's actually the right thing to do to withhold that information from Juliana about her true nature and identity, because this is something she could probably do a lot with. Star Trek: The Next Generation 365 actually raises this point too, though it phrases it more as a criticism of the episode and, more specifically, of Deanna's character. But I don't think this is a failing of the story, I think it's actually a genuinely ambiguous scene, and for an audience that seems to be addicted to “moral ambiguity”, it's telling no-one seems to have picked up on this. It's not a grimdark thing, because the option is always there for Data to tell Juliana at some point int he future; in fact the episode pretty explicitly leaves that possibility open.

In the end, that moment is more about Data himself then it is about his mother, which is exactly what he had just said it was. Maybe there will come a day when Data will be able to decouple his desire to transcend himself and unlock his potential from his concept of humanism and the human condition, but that day is not today. Share on Twitter Share on Facebook

You know, unless I'm much mistaken, Juliana's preprogrammed shutdown date is *before* Nemesis. Meaning there's now a perfectly functional Soong-type android that just needs a software reboot and for some memories to be installed. And hey, we've got another that has two sets of memories...

Fanficcy ideas aside, count me as another who likes this episode. (I *don't* like "Second Sight," but not for what appear to be the standard reasons; I don't like it because Fenna gets killed off in standard Star Trek love-interest-of-the-episode-fashion.) But then, I love "Dark Page," too, and consider it the strongest episode with both Lwaxana and Deanna Troi in it.

I get the feeling that "moral ambiguity" is code for "let's justify our goodies acting like baddies". I mean, from what I've seen of it, the big morally ambiguous question is "would you kill baby hitler" and, assuming that morality is the only question that has to be asked in such a situation, there's the blatantly obvious question, that might get contradicted by someone who knows more about history than I, of "why not just use the time machine to save Franz Ferdinand" that everyone seems to ignore when talking about killing a baby.

Also, after thinking about it, isn't the complaint that "someone from the character's past we've never met causes things/conflict to happen" kind of rich considering that's what I've gathered is the basic plot of most Worf episodes.

I'm another lover of this episode - especially down to the fact regarding that all of Data's most creative aspects come from a woman. Good stuff.

Yeah, I am kind of bored of the idea that android type being would always want to aspire to be human - I'd find it a lot more interesting watching them achieve their potential of becoming more than human. Anyway, great episode.