You Were Expecting Someone Else 27 (The Eyeless) 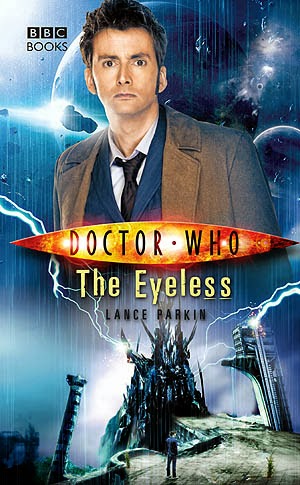 The War Doctor and Six team up to fight the creepy dead kid monster from The Holy Terror, who turns out to be... THE NIGHTMARE CHILD! DUN DUN DUUUUN!

Yeah the wilderness years are gonna be fun to reintegrate.

"pen an officially licensed novel in which Benny and the War Doctor team up to fight Zagreus, or some other suitably and madly dumb idea."

On a more serious note, this is one of the reasons I hope the BBC relaxes it's policy on New/Old stuff soon. It's bad enough that they're not taking advantage of new Tennant material, despite the fact there's clearly still a huge market out there.

If that means the War Doctor teaming up with Frobisher then please take all my money and make this happen.

Okay everyone, you can go home now. The internet has been won.

For the range it's in Eyeless does go quite far in hinting that the Doctor may have some responsibility for the weapon that devastated the planet.

Yes, indeed. Ive been hoping against hope that Big Finish would do something to continue the Sarah Jane Adventures--not only did they do an excellent job with the pre--revival Sarah Jane Smith audio series, (and nothing in SJA explicitly contradicts them, or even suggests their existance)--but it would be a way to have some of the actors reprise roles without as much of a time commitment.
My dream would be a series where Eleven has Luke as a companion--which could fit between Angels Take Manhattan and The Snowmen, or between adventures with Clara. That would avoid direct comment on Sarah Jane's status one way or another. Or they could do something like the Companion Chronicles line--as much as I appreciate the BBC audio line, they don't have a high profile and aren't as versatile as Big Finish.
Something like Bernice Summerfield with River Song would also be a treat....

Presumably there'll be a post tomorrow about this, but Capaldi's outfit has been released and it shows a definite Pertwee influence:
http://www.doctorwhotv.co.uk/series-8-capaldis-doctor-who-costume-revealed-57705.htm

I Am Curious (UNIT)

Hello. Thanks for talking about The Eyeless.

The weapon in The Eyeless destroys the designated target and anything that is aware of the target. The only possible enemy you could use it against without committing suicide would be one outside your own noosphere.

i'm in and offer to draw that as a graphic novel.

Doctor Twelve's gone for the slightly addled Eighties electro album producer look, crombie coat, Doc Martins, throwing a shape, Blue Steel stare. There's a touch of the Pertwee flash and a hint of Hartnell irascibility. Like it so far.

It looks like the costume Colin Baker wishes he'd been given to wear. Admittedly, so does Sylvester McCoy's jumper.

I think I spy a ring on his finger, on the hand furthest from us. Hartnell's?

I remember reading this book at the time and finding the flashback to the destruction of Gallifrey unexpected and thrilling as this was the closest we'd yet got to seeing any of the time war actually dramatised. Almost seems a shame that Day of the Doctor robs it of so much power for any future readers.

Someone will eventually pen an officially licensed novel in which Benny and the War Doctor team up to fight Zagreus, or some other suitably and madly dumb idea.

There's IDW's tenth Doctor comics; we see the Shadow Proclamation put the tenth Doctor on trial for altering a fixed point in time and space -- and their evidence of past actions in this regard is Charley Pollard.

I'm curious to see if you'll cover those before ducking out of the tenth Doctor era. They're interesting, in that they're a Doctor Who product strictly for an American audience as the UK couldn't officially get them.