Cultural Marxism III: Use of Weapons 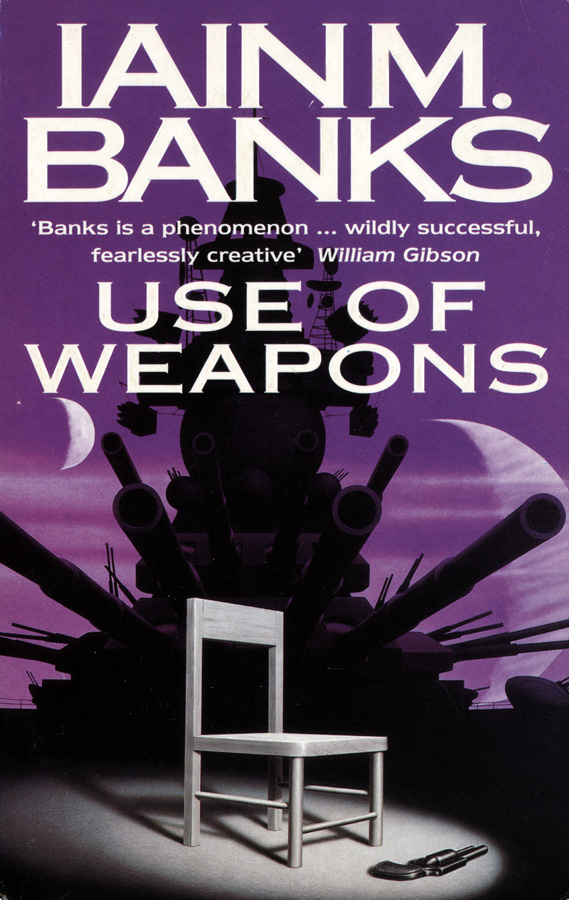 Use of Weapons marks a clear transition in Banks’s career; it is the last of the Culture novels to have been revised from a pre-existing manuscript. It also serves as a temporary endpoint to the Culture series, which Banks put down for six years, penning two of his three non-Culture sci-fi novels in the gap. And it provides a conceptual culmination to the line of thought explored in the three of Banks’s science fiction novels looked at thus far (although by any reasonable standard Walking on Glass and The Bridge are also science fiction novels). It is unsurprising, perhaps, to find that this is the oldest of Banks’s pre-Wasp Factory manuscripts, and the book he first developed the Culture for; a fact that offers an easy narrative whereby Banks wiped out on the overly ambitious premise and structure of this book, spent a couple of books playing with its themes in other contexts, and finally, with a crucial assist from Ken McLeod, reattempted the magnum opus and got it right.

Certainly the book echoes the three previous books discussed in distinct ways. The Wasp Factory is perhaps the subtlest, as it’s easy to miss that it uses the same basic narrative structure as Use of Weapons. Much of this is because Use of Weapons is so ostentatious in its structure, with its two sets of chapters, one of which is numbered backwards so as to scream “we are working our way through a series of flashbacks towards some climactic reveal about the character’s origin” as loudly as possible. But The Wasp Factory uses the same approach of alternating between a forward-moving timeline and a chain of flashback revelations about the past – it just doesn’t separate the flashbacks into their own chapters. (And much like The Wasp Factory, Use of Weapons’s best reading is the second one in which the reader is free to focus on how the novel is constructed around the information revealed at the end.)

The similarities with Consider Phlebas are more straightforward; like Consider Phlebas, Use of Weapons has a main character who is a mercenary not of the Culture itself. Unlike Horza, Cherardenine Zakalwe works for the Culture instead of their enemies, but he still has a distinct distance from them, actively declining to settle down within the Culture in favor of continuing to take soldiering jobs for them. In essentially every regard Use of Weapons is the smarter, subtler book here – readers interested in seeing how Banks developed as a writer could scarcely do better than reading these two and looking at two very similar protagonists who end up coming out very differently. But the pattern is largely the same.

You could easily argue that Gurgeh in Player of Games is another example of the pattern – as, indeed, is Frank, in that all of them are very much people who have been carefully shaped and designed for circumstances, even if only Horza and Cherardenine are weapons as such. And it’s true, this is a pronounced theme in the four Banks works discussed on this blog over the past year and change. But that’s not the only similarity. Player of Games also introduced the war-as-game metaphor, which Use of Weapons goes at least somewhat out of its way to nod at when it has a character complain to Cheradenine that other civilizations are “just a game” to the Culture. But more broadly, the vignette-based structure of Use of Weapons, in which we see Cheradenine enmeshed in multiple wars, generally though not always on the Culture’s behalf, echoes the way in which Player of Games suggests a general pattern to the Culture’s interferences. And likewise, the way in which Player of Games opts to describe games, less in terms of tactics and actions than in the interiority of the player, serves to set up much of how Use of Weapons works, which is by spending much of its head inside Cheradenine’s head and working through his thought processes, focusing less on the wars he involves himself in as geopolitical events than on his subjective experience of the fighting. The result is that the wars become increasingly blurred together as the novel winds on, a tendency heightened by the oft-observed tendency of Cheradenine’s Culture employers not always bothering to accurately brief him on whether he’s supposed to win or lose a given war. (Satisfyingly, at one point Cheradenine is enacting what is clearly the standard issue Culture “win by retreating” battle plan described in both Consider Phlebas and Player of Games, only to be told at the last second that the Culture actually needs him to lose this one.)

But it’s not quite fair to say this is less a “big ideas” novel than the previous two Culture books – it is, after all, absolutely jam-packed with massive ideas. Indeed, in its original, abandoned form it was, apparently, an elaborate superstructure of ideas, with the contents of individual chapters determined by a complex system such that “themes like “imprisonment” and “flight as freedom” were arranged on intersecting X/Y axes, with any given chapterette therefore described by two themes, both of which had to be woven into it,” with chapters acquiring more themes as one got towards the center of the book, and then the themes lifting back off again, Alphabetical Africa style. Obviously this wasn’t what the book became, and Banks is typically amusing in slagging off the entire idea, but it does highlight the conceptual heft of the book.

But the novel has, I think, more of an affinity for The Wasp Factory, in that it is first and foremost a character piece building towards a climactic revelation about the character’s origins. It even recreates some of the gothic tone of The Wasp Factory – arguably even more so, as the accounts of Cheradenine’s childhood, with their gardens and aristocracies, fit a classical gothic profile much more than the rural grotesques of The Wasp Factory. And yet this comparison falters too. Yes, like The Wasp Factory it builds towards a big, dramatic twist, but crucially, the revelation is not a mystery to Cheradenine himself, and the amount of the book that it actually requires be reconsidered is fairly narrow. It’s not that it’s a lackluster twist in the least – it’s an absolute corker by pretty much any standard. But unlike The Wasp Factory, it is not a deep and forbidden secret that hangs over everything. For the most part, the twist is only really conceivable as of the penultimate chapter. Prior to that, it’s clear Cheradenine has a terrible secret he’s keeping from the Culture and is seeking redemption for something, but it’s not until the revelation of the chair in the second-to-last chapter that the question of Cheradenine’s actual relationship with the chair can actually be asked.

Ah, yes. The chair. Obviously chairs are a subject Eruditorum Press has dealt with before, although, like Marxism, they’re not usually, strictly speaking, my beat. As presented by Jane, they are first and foremost symbols and tools of ascension. Which isn’t a completely invalid read of the chair in Use of Weapons, although in Jane’s formulation it’s usually sitting in the chair that’s important, not making it out of the bones of your former lover/your enemy’s sister. But that’s a relatively minor detail as such things go; within Cheradenine’s psyche, it is clearly the crafting of the chair that turns him from a scrappy pretender to the throne into the finely-honed weapon that the Culture makes such use of.

That the ascension should be a dark and troubled one hardly conflicts with any of Jane’s approaches either. The nature of ascension has always been dark and troubling. If it’s easy, you’re most certainly doing it wrong. But equally, Cheradenine’s long career as a weapon can hardly be called “ascended.” The novel does not particularly suggest that Cheradenine’s employment by the Culture is bad – he seems to think them more or less ideal employers, in fact. But it’s also not ascension. And more to the point, for all that many readers focus on the Hannibalistic extravagance of the chair, what is in many ways more important is how perfectly crafted the move is, coming very close to turning what had been a hopeless situation into a victory. Far from being an act of senseless and excessive sadism, the chair was carefully planned psyops against a specific target, and in fact worked to drive him to suicide. It is, in other words, the act of someone who has already ascended to being a weapon.

And this is, perhaps, the way in which Use of Weapons most differs from The Wasp Factory. In The Wasp Factory, the revelation that Frank is a girl is largely illuminating, serving to explain and clarify what’s come before. But the climactic revelation of Use of Weapons does nothing of the sort. Learning what Cheradenine did only raises more questions, and while rereading the book knowing the ending brings the thematic foreshadowing to the forefront of the mix (for instance, Cheradenine’s frequent complaints that the Culture is too forgiving), it mostly makes the question of what Cheradenine is thinking or what his precise motivations are at any given moment muddier, not clearer.

Which is, of course, why this is the best Culture novel to date and a consensus contender for Banks’s masterpiece. And more than that, it’s a big part of why the Culture series is so good. The culmination of the big ideas about people-as-weapons and the arrogance and myopia of interventionalism isn’t a definitive statement – it’s Banks’s most clouded and conflicted novel to date. This isn’t to say that Banks works himself up to some drably liberal “well I guess all points of view are equally valid” either. Rather, it’s a proper culmination – one that takes all the literary techniques and metaphoric frames he’s built and pushes them to their endpoints, revealing the fractally complex ambivalences and ambiguities within. There’s nothing more to say, at least with these approaches. And that’s perhaps the highest praise you can give Use of Weapons: it’s so good you can see why he didn’t write another one for six years.

“Truthfully”: Thine Own Self Eruditorum Presscast: Wonder Woman Earth One

Leave a Reply to AylwinCancel reply