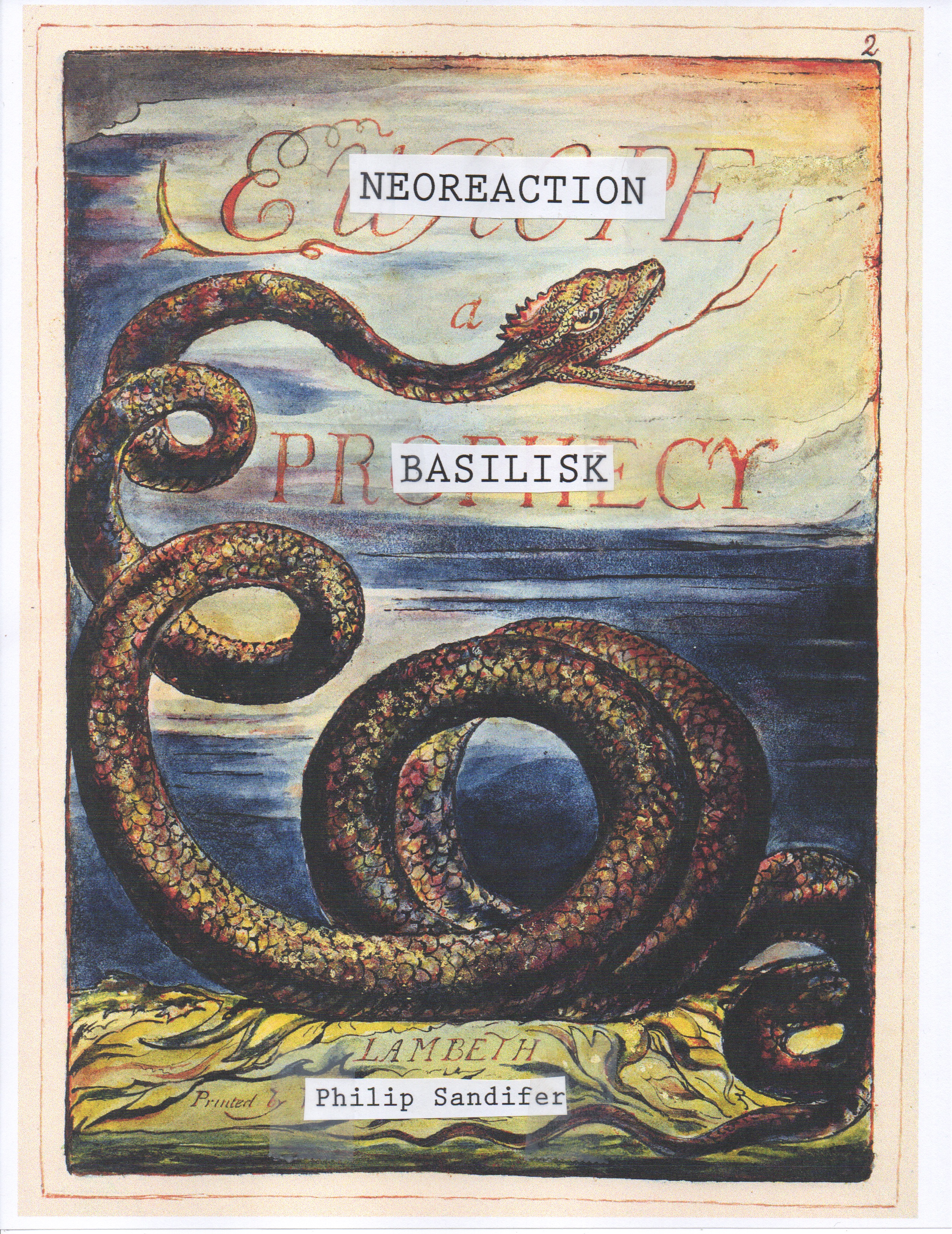 A bevy of Neoreaction a Basilisk stuff as we head into the final week of the Kickstarter. First, I’m joined by our very own Jane Campbell for the fourth of our interview podcasts, this one, as you’d expect, really digging into the gnostic and mystical aspects of the book. It’s a hoot, and available for your listening pleasure here.

Second, as the big image indicates, it’s finally time to do our cover reveal. There was really only one choice for what to do with this, between the fact that my title is a riff on Blake’s, and Blake’s title page literally had a giant fucking snake on it. This’ll be the cover for both Color and Conspiracy Zine editions.

Finally, I figured I’d do the “here’s what you have to look forward to” on the remaining thresholds if we can make them. Which I remain optimistic that we can, but it’ll need some momentum in the final week, so here we go.

Dead obvious, and probably the best actual stretch of the bunch. Basically, everyone’s pledge immediately becomes more valuable as they get two books, the listed reward and a nice ebook collection of the backing essays, currently consisting of “The Blind All-Seeing Eye of Gamergate” (at about 4.5k now, and coming along really well), “Theses on Trump” (2.5k now, and getting stranger), the Austrian school essay Jack and I will do, and “Lizard People, Dear Reader.” If we hit the $12k or $14k goals, it’ll include those too. It’ll also include a short essay that will be 100% exclusive to this ebook addressing an error in the book that so far Tom Ewing has been the only person to spot. (There are of course errors spotted by people other than Tom Ewing, but most of those are easily fixed – this one’s actually quite small, but also very hard to work around.)

I was a little sad Lizard People beat this in the Twitter poll, partially because I had a firmer idea of this, but partially because I feel like I’m badly overdue for a proper, meaty piece about trans issues. And the larger Neoreaction a Basilisk book really does need something that’s overtly focused on something other than white male issues. And while I really should pick race instead of gender for something big one of these days, this feels like the right essay to go into it. There are some important points from Neoreaction a Basilisk that I can pick up on with this. And there are some larger theoretical issues worth squaring away, whether it be the rhetorical and intellectual function of the “Sister Souljah Moment” or the larger question of what the left’s appallingly bad actors mean for its critiques of the right. Also, I get to riff extendedly on the image of “the transsexual empire,” as Janice Raymond famously called it, which is such a bizarre overreach of a metaphor, and yet one that ultimately has been picked up on by the right in discussions of bathroom bills. So yeah, lots to do with this, and it’ll be a good, important essay.

Also, I 100% promise I will call Cathy Brennan a fake goth in it.

This is just a hoot.

This would be my second bespoke short story, the first being “The Immortality of Leelah,” tucked away in Guided by the Beauty of Their Weapons. I’ve got about 2000 words written, and it’ll go for a while after that. It’s my spin on “modern day Lovecraft,” and more broadly I suppose my riff on the sorts of things Nick Land does with Phyl-Undhu and Chasm, which is to say that it takes some of the iconography and themes of the book and puts them to service in a very straightforward bit of SF-horror. If we make $12k, I’ll post at least some of what I’ve already got as a preview. Until then, one paragraph, describing the strange and unsettling image filter that our protagonist becomes fascinated with, and that will slowly draw her deeper into mysteries whose solutions offer only incomprehensible horror:

It is difficult, even now, to quite describe what the images looked like. They were still recognizable as their original subjects. But after the initial flare of recognition the eye is drawn to strange and distorted eddies within the image; objects slightly the wrong size, with oddly bulbous shapes, and patches of odd colors that seemed as if light was being cast upon the scene at strange angles, giving them a sense of hideous geometry. But it is in the almost fractal details of these eddies that the true perverse appeal of the filter was revealed – a sort of texture to the skin of every object that passed through it. It is not quite that there are faces within the image, but rather a sort of monstrous suggestion of a face – an awful profusion of eyes that stare not from within things, but from the very skin of the world.

Yeah. It’s pretty much “Deep Dream: The Horror Story.” With riffs on both Gamergate and Curtis Yarvin. So let’s see if we can get to $14k, eh?

Neoreaction a Basilisk is available on Kickstarter.