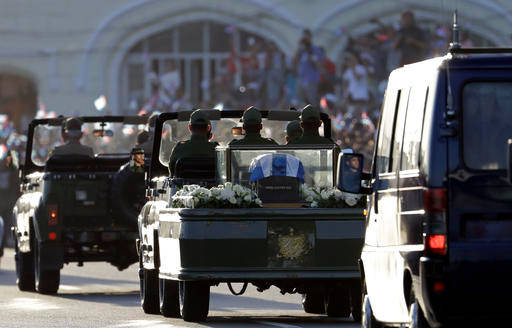 …aaaaaand at this point we would normally go into a recitation of certain obvious points.  Different points depending on the political orientation of the writer, his publication, etc.

Unusually for the Right, this is all true. They generally don’t have to lie about Cuba.  They would if they had to, but they generally don’t need to.  Not about the basics anyway.  Which must be refreshing for them.  (Actually I don’t think they give a flying toss.)  They lie about the bigger picture, of course, characterizing Cuba as an exceptional abhorrence, while suppressing votes and supporting privatised slave gulags at home, and bombing Syria and cuddling the Saudi royalty and arming Israeli apartheid and invading Iraq, etc etc etc.

For the Left, we would probably stress the enormous improvements in education, literacy, health care, etc, which came from the revolution.  We’d talk about Castro’s support for the ANC against South African Apartheid (in contrast to most Western governments) and for similar liberation struggles across the world, Palestine for instance.  We’d talk about how bad Batista was (and he was a vicious dictator), about how pre-revolution Cuba was a playground for the US corporations and the mafia, about how badly the USA treated post-revolution Cuba (very badly), the hypocrisy of the West in condemning Castro when it snuggles up to friendly dictators (Pinochet, the Saudi royals, etc etc etc) and commits imperial atrocities itself, including multiple coups to put US-friendly dictators in charge of Latin American nations.  We’d talk about 600-odd CIA assassination attempts, and exploding cigars, and so on.

Occasionally, you’ll get an article which mixes the two approaches in the name of nuance and balance.  Even Owen Jones managed this basic feat.  But even in such cases, the exercise is still in the mixing of two distinct approaches.  (With Jones, the result was a classic case of ‘this, but on the other hand this’, followed by his customary moralising at the Left.)

And that’s the point.  Both sides are more-or-less right about Castro and his Cuba.  Maybe not in their ideological conclusions, but in their factual cases.

But very few commentators have stopped to ask why these two realities overlap.…